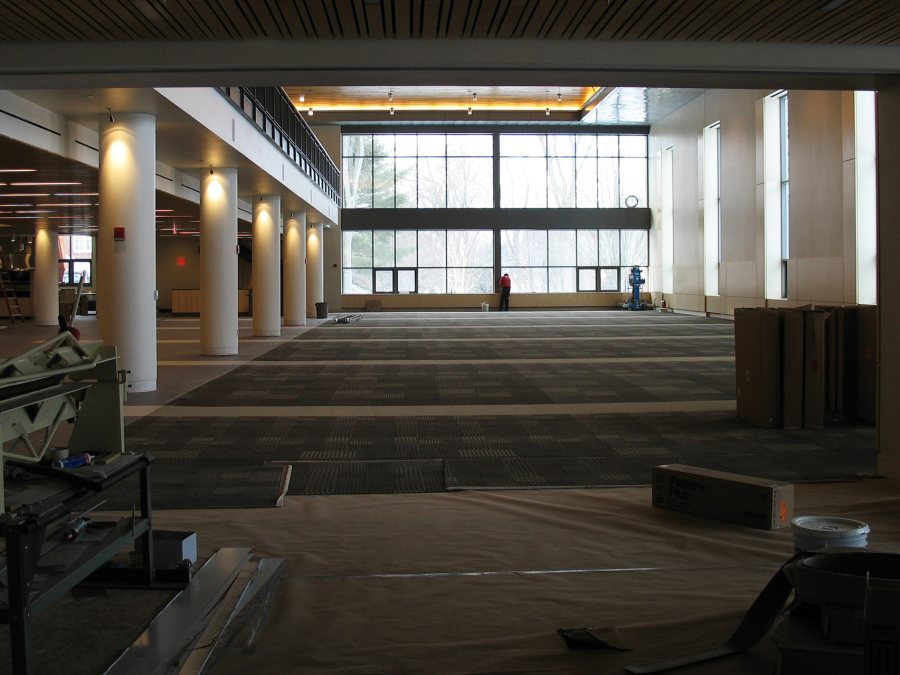 With the official opening just weeks away, the new dining Commons passed a milestone early on Feb. 7: the arrival of its first truckload of food.

The Performance Food Group semi backed into the Commons’ truck bay, on Central Avenue, shortly after dawn as an overnight snowfall tapered off. The load, said Dining Services director Christine Schwartz, was all non-perishables — everything from preserved artichoke hearts to crackers to pasta to canned tuna.

The truck bay’s scissor lift, installed to expedite the unloading of trucks, wasn’t working in time for the delivery, and the unloading crew used portable ramps instead. But the lift was ready to go by the end of the day, said project manager Paul Farnsworth. Its completion was delayed by the repouring of its concrete base to allow the lift to retract flush with floor level. 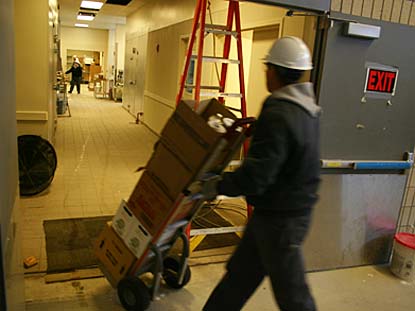 A Performance Food Group driver wheels a dolly’s worth of food into the new Commons on Feb. 7, 2008. (Elizabeth Mitchell ’10 for Bates College)

The Commons project passed another milestone a week before the food shipment. Forty or so Dining Services staff made their first working visit on Jan. 31, cleaning cooking equipment and training with more than a dozen appliance-maker representatives.

The session took place inside a plastic tent: The servery had been enclosed in plastic sheets the previous week — not, as we first suspected, to block Campus Construction Update’s inquiring gaze through the western windows, but instead to keep out the dust from construction in the adjacent dining hall.

The servery was unwrapped the evening of the 31st, at the end of a long day for a Dining Services staff that had to keep producing meals in the old Commons while training in the new.

Schwartz will have staff in the new facility henceforth. Cleaning is continuing, and Bates cooks are learning their new appliances and trialing recipes for things like dough.

For example, “we don’t know whether we want a 16-ounce ball to make a 14-piece pizza, or a 14 to make a 12, or a 15 to make a 14,” Schwartz said, losing Campus Construction Update altogether. “We want to mess with the weight of the dough ball to make sure what we’re getting.”

During the week of Feb. 11, Dining Services will be serving the results of its experiments in the new facility to students, staff and faculty volunteers.

Schwartz announced to the campus this week that the last board plan meal in Memorial Commons will be dinner on Feb. 15. From Feb. 16–20, students remaining on campus during the winter recess can dine during specific mealtimes in the Den, which will be closed to the general public. Starting Feb. 21, Dining Services will be serving in the new facility — and, because this is a “soft opening” with a limited menu, there will be no charge for meals Feb. 21–23. 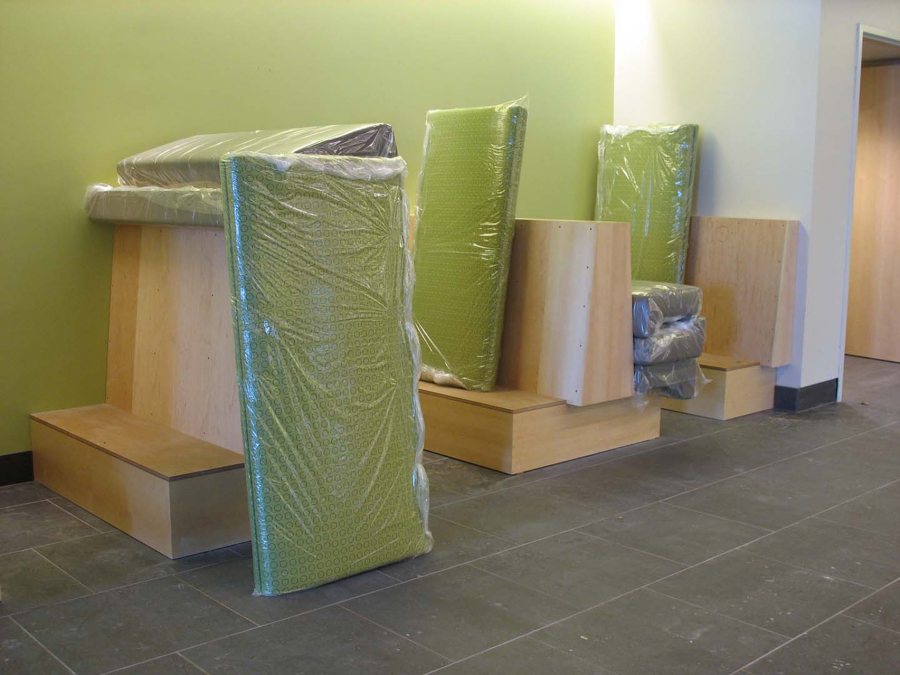 When the dining hall opens officially for dinner on Feb. 24, please disregard any lack of visual harmony between the tables and chairs. The chairs Bates purchased for the facility have been delayed, Farnsworth reported, and in the meantime the vendors are loaning the College 414 chairs to complement 540 or so being retained from the old facility.

The vendors “stepped up to the plate and are getting us chairs so we’ll have something to sit on until the ones we asked for show up,” Farnsworth said.

Movers will start bringing in furniture during the week of Feb. 11, with the dining hall pieces going in around the 15th. 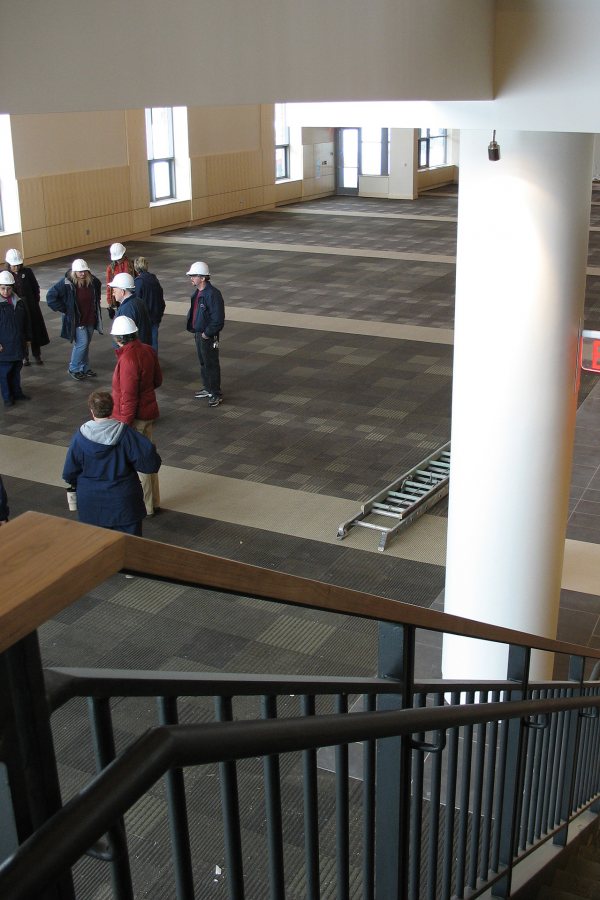 Think about the last time you moved your household, and then multiply that effort by a factor of hundreds. Schwartz pointed out that it’s typical for an
institutional dining service to hire a consulting company to help with a transition like this. But she and her staff eschewed that step, feeling that the experience would be invaluable.

“I asked my management staff, ‘This is what I’m thinking — can we do it?’ Because this is hugely labor-intensive,” she explained. “Especially from a management point of view, it eats a chunk of time.

“And they all agreed, and that’s what we’ve done, and we’re on track,” she said. “I don’t feel that a consultant could have done any better than we have done.

“This has been a great time for people to grow.”

The supply of construction news per se is dwindling (and with it the life expectancy of this series of Campus Construction Updates). Back in the milestone department, the city of Lewiston issued a partial occupancy permit the week of Jan. 28 — partial only because some carpeting remained unfinished on the second floor.

“They gave us the servery, the kitchen and the access to them,” Farnsworth said. “That’s what we needed in order to continue with cleaning and training.”

Woodworkers are still installing curved panels of maple veneer and other finishing touches in the fireplace lounge, which will likely be the last space completed in the building. 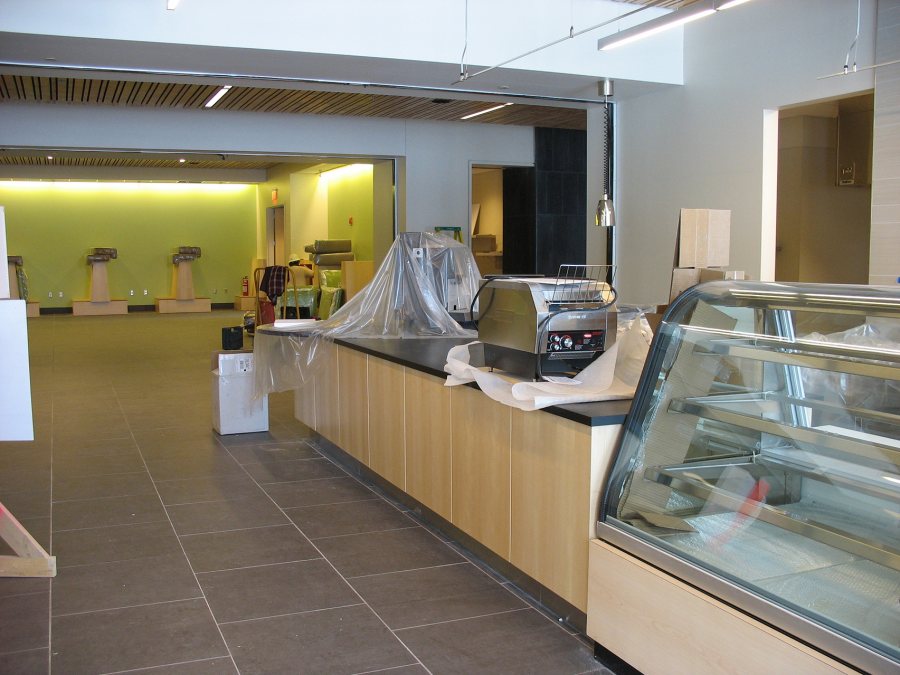 In addition, movable glass partitions for Milt’s Emporium, the flex dining area and a small dining room recently arrived and are being installed.

For areas apart from the kitchen and servery, general contractor Consigli Construction has brought in a cleaning company. The final inspection process —  called “punch-listing” — is under way. And so is commissioning, in which a third party tests the technical systems.

Alumni Walk: Finally, though their concrete bases are hidden under the snow, there was news about the forthcoming installation of markers at both ends of the walk. Project architects at Sasaki Associates have approved the dark-gray granite for them and they will be positioned during the spring. 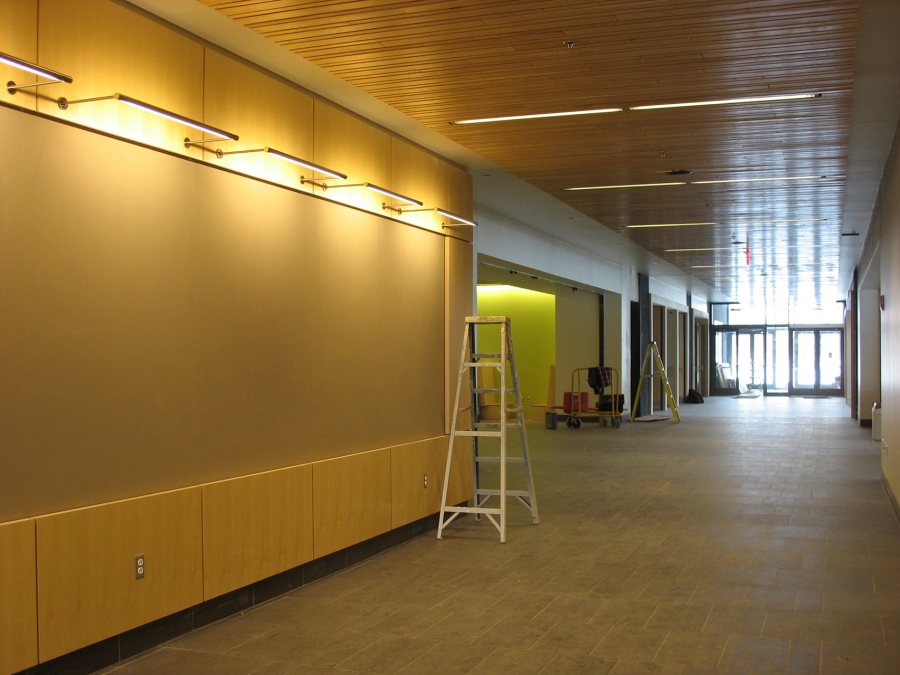 The Arcade in the new Commons won’t be so empty much longer. (Doug Hubley/Bates College)

One bearing the words “Alumni Walk,” the other a tribute to Bates alumni, the markers will consist of stone chunks separated by gaps that, when viewed from above, reflect the pathways crossing Alumni Walk.

Farnsworth also held out some reassurance vis-à-vis an end to winter’s monotone. In the not-too-distant future, he reminded us, 140,000 scilla bulbs will be sending slender green shoots up through the grass and then producing a carpet of intense blue blossoms. 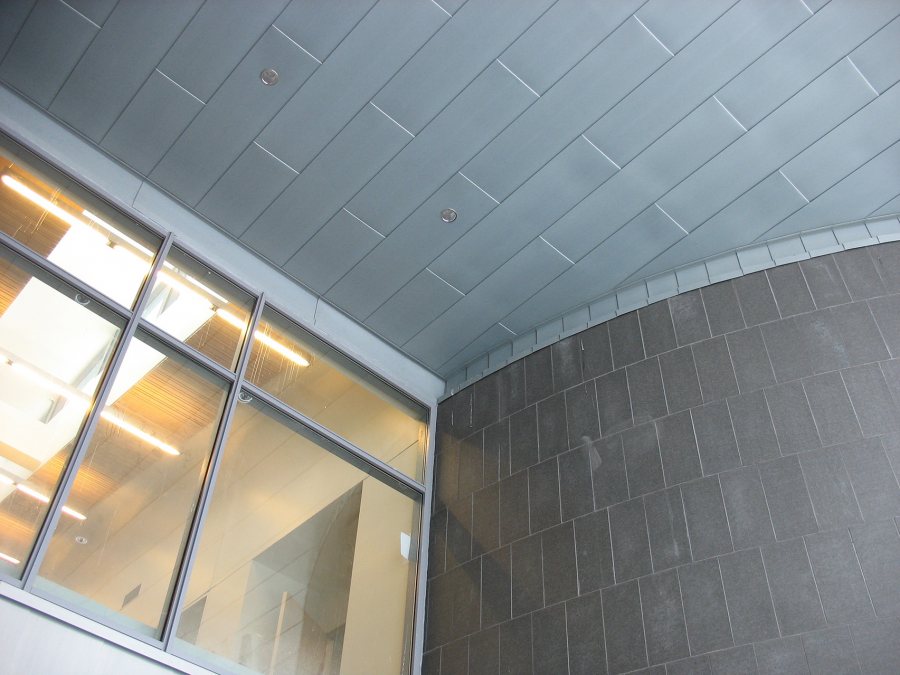 “You’re supposed to plant scillas late in the season,” Farnsworth explained, “and obviously we wanted to finish the Alumni Walk work so we put them in a little early.” That was a bit worrisome. But, he said, when they’ve had to peel back the turf for walk repairs, “they’ve started to sprout. They’re alive.”

Our back pages: Visit the index of earlier Campus Construction Updates. 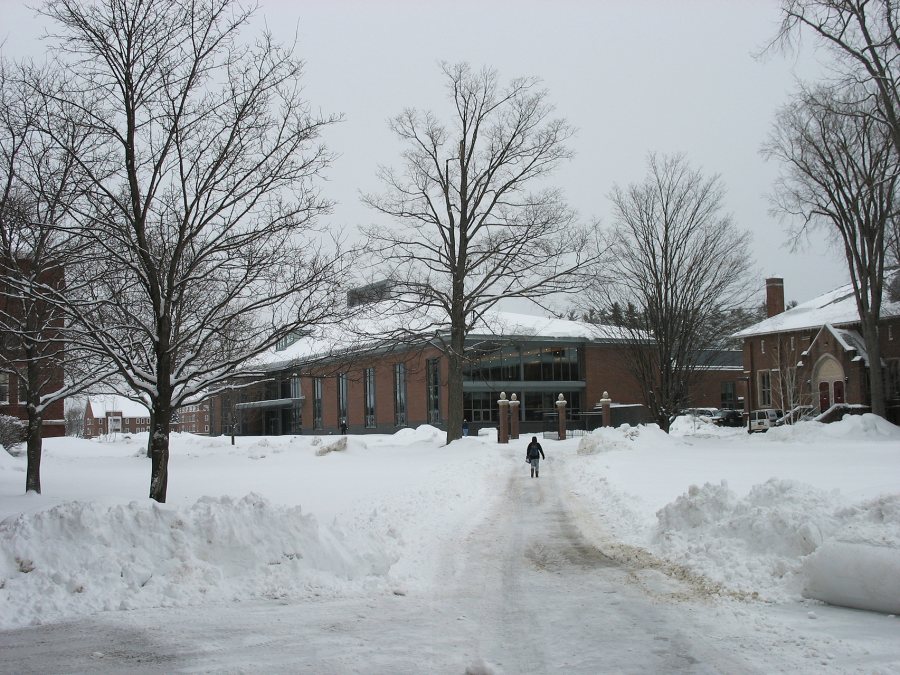 The new Commons seen from the Library Quad on Feb. 7. (Doug Hubley/Bates College)