It’s common knowledge that the late actor Paul Newman once asked Bates to recast its Newman Day tradition. The evidence is this 1987 letter from the actor to then-President T. Hedley Reynolds.

What’s not been known until now is how Newman probably learned about the Bates tradition. That part of the story involves the person copied on the letter, Laurette Cousineau (now Carle), Class of ’86. 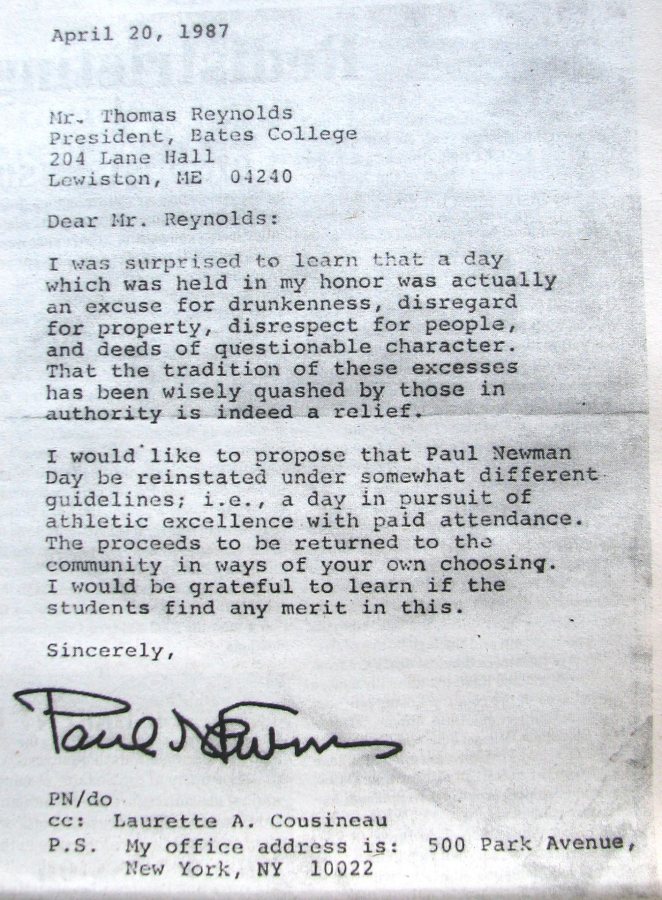 Above is the 1987 letter from actor Paul Newman to then-President T. Hedley Reynolds, as reprinted in a 2001 issue of The Bates Student.

After one Newman Day of particularly ill-mannered student behavior — probably 1985, Carle says — she wrote to the actor, telling him what was occurring in his name. “My roommate, Jennifer Goodwin Oates ’86, remembers watching me sit down at my desk to write it,” says Carle, now a science teacher in Franklin, Tenn. “She got a kick out of it.”

Held since the 1970s, Newman Day usually occurs on the Friday of Winter Carnival weekend. Similar to the more recent tradition at Princeton (which Newman also tried to stop, in 2004), participants try to drink 24 beers in 24 hours while still going about their usual routine. Why the tradition carries Newman’s name is not clear — maybe because of Newman’s Cool Hand Luke character (50 eggs in an hour) and/or the apocryphal Newman quote: “Twenty-four beers in a case, 24 hours in a day. Coincidence? I think not.”

Today, Newman Day passes quietly. In the 1980s, however, the event prompted lively debate in The Bates Student between those who defended it for reasons of personal freedom (to get hammered, apparently) and those who decried its effects on the community.

Back in 1985, Carle recalls getting only a form letter in response to her letter to Newman. Two years later, however, he wrote this letter to Reynolds, copying Carle. Newman’s text, suggesting a community fundraiser instead of a drinking day, is in keeping with the tongue-in-cheek mission of Newman’s Own, the food company he had founded a few years earlier: “Shameless exploitation for the common good.”

Just before Newman Day 1988, the Representative Assembly discussed and pooh-poohed the actor’s letter, with The Bates Student reporting that the RA “agreed with the administration that students…should be trusted to handle the day.” (It’s not known if Reynolds responded to Newman’s letter, as neither the letter nor any response is in the official Bates Archives. What’s seen here is a version that appeared for a few years running in the late 1990s Bates Student.)

The Bates deans have tried to stop the tradition over the years, notably in January 1987 when, in the words of then-dean Celeste Branham, “all hell broke loose in Commons” during Newman Day. Afterwards, she hopefully declared that Paul Newman Day at Bates “is over.” Perhaps that statement reached the actor, prompting him to express premature “relief” in his letter that the tradition was “quashed.”