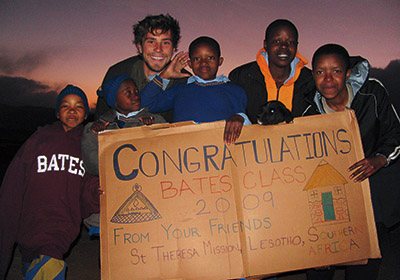 I just read the Spring 2009 issue; it was a pleasure. I’m writing from the Kingdom of Lesotho in Southern Africa where I work as a Peace Corps education volunteer teaching secondary math and science. I also work with the African Library Project setting up school libraries and am involved in HIV/AIDS education. Lesotho has the world’s third-highest adult HIV prevalence, so all volunteers in country incorporate HIV education into whatever we do.

As a transfer to Bates my sophomore year, I became quite close with this year’s graduating class. Unable to attend Commencement, I and my students sought a way to congratulate the grads. The students decided to make a poster and send photographs to our friends. This helped to meet the Peace Corps’ central goal of promoting amity between Americans and host country nationals. Take a look.

Four years ago, I was a Bates senior about to graduate. I had spent my college days as a happy resident, swimming in all the resources and opportunities that Bates had to offer. Bates helped me discover and define my own values, and Lewiston for a time was home. But on the day of my graduation, when faced with that inevitable question of “What now?” I decided to leave. I wasn’t alone in this decision. Lewiston had few professional opportunities for newly minted bachelors of arts.

Please Write!
We love letters. Letters may be edited for length (300 words or fewer preferred), style, grammar, clarity, and relevance to College issues and issues discussed in Bates Magazine. E-mail your letter, or postal-mail it to Bates Magazine, Office of Communications and Media Relations, 141 Nichols St., Lewiston ME 04240.

This letter is to commend my dear friends Craig Saddlemire ’05 and Ari Rosenberg ’06, who stayed. Not only did they stay in Lewiston but became involved with the Visible Community (“Tents Situation,” Spring 2005), a grassroots community organization comprising downtown Lewiston residents taking it upon themselves to chart a positive future for their neighborhood and to become collaborators in the process of downtown redevelopment.

Craig had an unusual interest while he was a student at Bates: making movies. I, for one, did not know where that interest would take him. Since 2004 he has recorded and documented the history of the Visible Community. He has now created a documentary movie about Lewiston and its people, Neighbor by Neighbor: Mobilizing an Invisible Community in Lewiston, Maine, that humanizes the often-stereotyped and makes visible the most invisible among us. I hope this movie will open eyes and hearts alike.

Over the years, many Bates alumni have decided to stay in Lewiston. These Batesies have taken what they learned at Bates and are applying it to their adopted community, fulfilling a circle of mutual opportunity and responsibility shared by Bates and the city.

Recently I faced the bittersweet reality of graduating from Bates College. During the past four years, Bates and the entire Lewiston-Auburn community became my home. As a lifelong resident of a small town in Aroostook County, I was somewhat nervous, four years ago, about moving down to such a big city. However, I was happy to find that my fellow Mainers here are characterized by the same qualities that I have always appreciated about people in the County. I want to thank the people of Lewiston-Auburn for being so kind and welcoming to me and my fellow classmates throughout our time at Bates. While I have committed to teaching for two years in Boston through Teach for America, long-term I am looking to move back to this part of Maine. The lessons learned inside the classroom at Bates are very valuable, but Bates’ location here in Lewiston is one of the things that make the institution so special.

As an alumna of the library audio room — I worked there all four years at Bates — I was saddened to hear of the loss of Jan Lee, the College’s audio librarian from 1982 to 1994 (“[intlink id=”10325″ type=”post”]Turning Points[/intlink],” Spring 2009). Always with a smile, Jan taught me more than just how to catalogue music. She taught me to listen to music, to learn its history, and to share it with others as part of my job. Many days I would arrive at work to find Jan with headphones on, listening. She’d pull me over, plug in another set, and share what she was listening to, and why.

With a heavy heart and tremendous sadness, I read of the passing of Robert Paul Martin ’57 (“[intlink id=”10291″ type=”post”]Deaths[/intlink],” Spring 2009). As a native ’Header and Bobcat football player, “Spinner” impacted my life on multiple levels. My only regret is that I never shared this with him during his life.

My first encounter with Mr. Martin was in a sophomore-year American history class at Marblehead High School. He taught using the Socratic method, so rather than lecturing from behind a desk he questioned and challenged the class from our first day of high school. He encouraged dialogue, debate, and dissenting opinions while also branding meaningful dates in the formation of our country onto uncluttered brains of willing students. As a senior, I again partook of his offerings, this time in a post–World War II American history class. I remember writing a position paper on Sen. Joe McCarthy that was so controversial that all of my classmates attacked my thesis. Meanwhile, Mr. Martin orchestrated the debate with a smile on his face, supporting my outrageous musings.

At no point was I aware of Mr. Martin’s Bates connection, even though he knew of my interest in the school as I had asked him to write college references for me. I was accepted to Bates. Soon thereafter, Mr. Martin commented on my acceptance and alluded to his having attended the school. He said that he hoped I enjoyed competing on the gridiron against the hated rivals from Brunswick and Waterville but never mentioned his exploits while in Lewiston. Mr. Martin never even mentioned he played football!

Arriving on campus for practice my freshman year, I walked through the trophy room upstairs in Alumni Gym. I saw the jerseys of a few (very few) decorated Bobcat football players. Then I came upon Spinner’s jersey, in the glass case, retired. It was the first time Mr. Martin’s Bobcat greatness became known to me.

In his humble and understated way, Mr. Martin kept his football prowess a complete secret. If I juxtapose his approach against all the underachieving chest pumpers among today’s athletes, his legend grows even greater. I feel blessed to have known you, Mr. Martin.

You’ve probably already received news of the death of Nelson Boies Doak ’70 (page 57 of this issue).  As the long-time program director for WKTJ-FM 99.3 in Farmington, Maine, Nelson was my boss when I worked as a part-time radio announcer in high school. He gave me the station keys when I was 14 so I could run the control booth for my Sunday morning shift, 6 o’clock to noon. About a year later, I added the Saturday sign-on shift, which required waking at 4:15 a.m. to power up the station’s highly unreliable Korean War–surplus broadcast equipment by 5 o’clock. By the time I was a junior, I worked nearly every day during school break weeks and summers, filling in for anyone on vacation. With that job, Nelson gave me instant hallway cred at Mount Blue High School.

I consider Nelson to have been the best music teacher I ever had. Although he kind of looked like Jerry Garcia, he much preferred Grand Funk Railroad. At 14, I didn’t know what anyone in Grand Funk looked like, but I always pictured Nelson belting out “We’re an American Band.” He thought the artist formerly known as John Cougar was reprising (ripping off?) the early work of Neil Diamond. And he adored, for reasons unknown to me, The Archies. All the other grown-up full-time DJs gave him no end of grief for that. As a teen, I couldn’t bring myself to cue up an Archies track. Today, “Sugar Sugar” sounds sweeter.