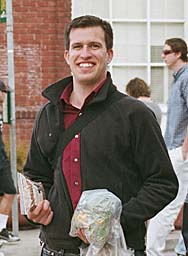 Alan Hunt ’03 tells a story about a farmer who raises both vegetables and pigs.

At the end of each growing season, the farmer allows the pigs to nose through his vegetable fields. “The pigs wind up plowing the field for him, because they turn the soil over 12 to 16 inches down,” says Hunt, an agricultural policy analyst at a Washington “think and do tank.”

“And what’s more, because they’re looking for leftover roots and pests, the pigs do a better job cleaning up the field than the farmer could do by hand or mechanically.”

That’s synergy in action, says Hunt. “The farmer has to spend more time managing the pigs on the field — but he’s not spending time on the tractor doing it himself. He’s fertilizing the field, and at the same time he’s feeding the pigs.”

Seeking synergy, in other words, means seeking ways to harmonize needs, means and methods for the best possible outcome. “You need to look at the whole food system,” says Hunt, instead of the input-output view that typifies much of U.S. agriculture.

Hunt works at the nonprofit Northeast Midwest Institute, which promotes economic vitality, environmental quality and regional equity in the Northeast and Midwest states.

“A lot of what we do is consensus-building with stakeholder groups to organize, prioritize, and translate policy recommendations into legislation,” Hunt explains.

For example, he worked with advocacy groups — ranging from anti-hunger to minority food producer to sustainable agriculture — on developing specific policy for the 2008 U.S. farm bill to address “food deserts,” areas such as economically disadvantaged inner cities or rural zones where people can’t find healthy, affordable or fresh foods.

Revised every five years, this legislation is one of the nation’s primary agricultural and food policy tools. Its most recent edition, the Food, Conservation and Energy Act of 2008, was enacted last May.

“We developed something called the Healthy Urban Food Enterprise Development Center to work on getting healthier and more-local products into corner stores, and helping producers get those products into their supply chain,” says Hunt.

This concept bears out Hunt’s belief that the most effective approach to food-desert issues is economic development financing. “The Housing and Urban Development department has really great and well-used economic development tools, but their focus is on generating tax revenue and jobs in the community,” he says.

“We might need to look at some of the tools that already exist and change the way the criteria are evaluated.”

Hunt grew up on a farm in New Jersey and earned a bachelor’s degree in environmental studies at Bates. Knowing he wanted a school with a solid ES program, he was immediately attracted to Bates because of its location.

“I wanted to be in New England,” he says. His interest in food grew after a visit to Nezinscot Farm, a family-owned farm in Turner, which produces, and serves in its own café, a full selection of natural foods.

“I had nothing like it where I grew up, even though I grew up in a farm area,” Hunt says. “It definitely influenced what I’m doing now.”

During his junior year abroad, Hunt researched consumer cultures, including a 700-year-old market in Norwich, England, that sold local farm-fresh foods. “I surveyed some of the vendors there, and read a lot about consumption and identity,” he explains.

“I was thinking it would be important for someone’s community identity to buy local products,” he says. (Hunt pursued that theme in a study of the now-defunct Portland Public Market, working with environmental economist Lynne Lewis, and continued to study Maine food production while doing post-graduate work at Duke. In fact, he found his present position through a contact at the Maine Department of Agriculture.)

“With local foods, the most important thing is a community connection between consumer and producer. The consumer can talk with the producer directly, so the producer gets better feedback and can change their practices to suit the market.

“So if somebody asks, ‘Well, is this organic?’ the producer might go home and consider that. That can change the market and hopefully change the environmental outcome as well.”