An organizing principle in the life of Ethan Miller ’00 is the desire to answer a simple question: As a species and among all the other species, how can humans live together differently?

More specifically, what Miller wants to know is how humans can inhabit the Earth in a way that enables all living things to thrive. 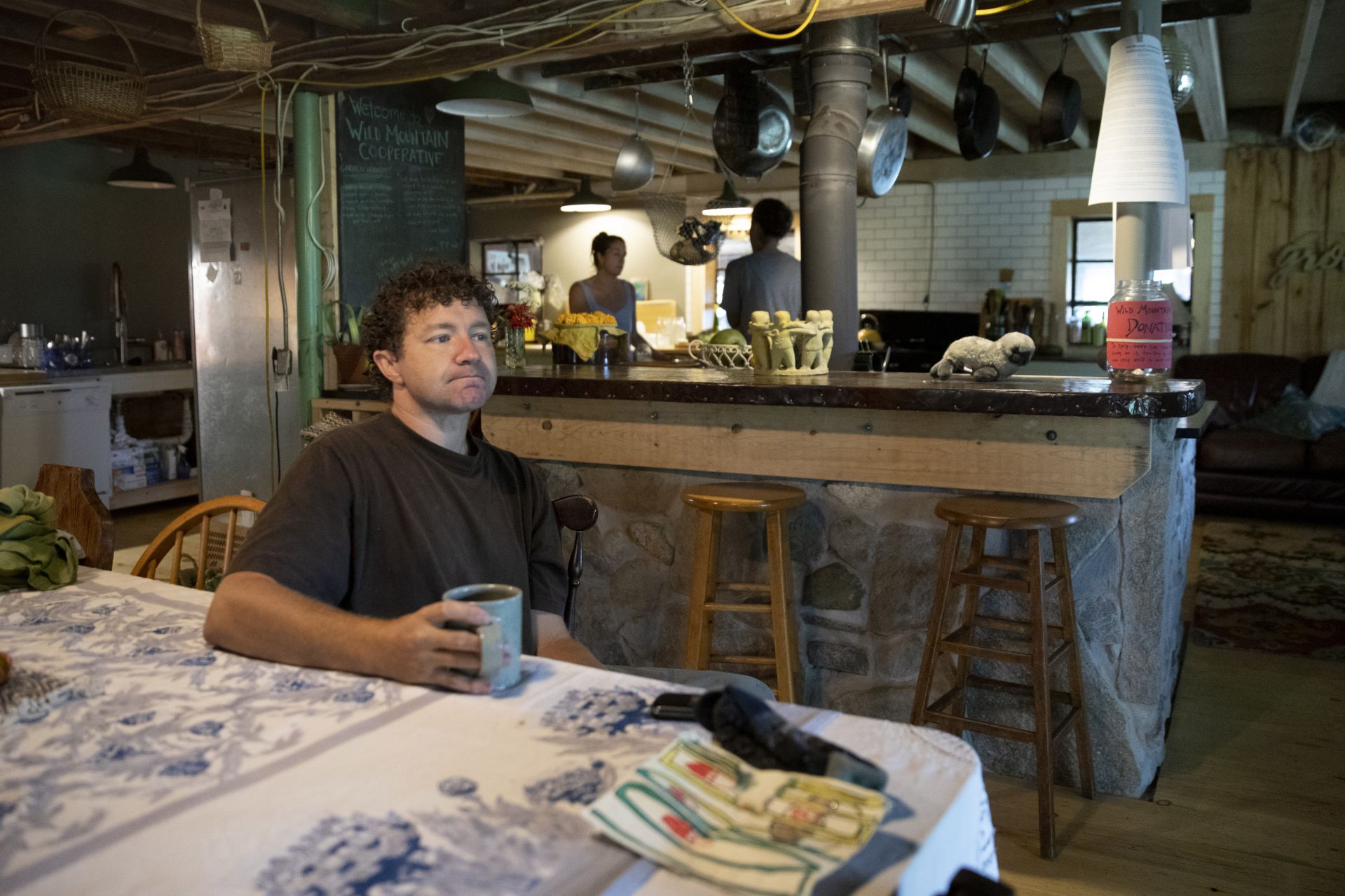 That question, Miller says, prevails in his life “whether it’s conceptual approaches or really practical, day-to-day things, like how do we actually deal with doing the dishes?” And it helps explain a breadth of interests that include hands-on farm practices, political economy, philosophy, and environmental studies, which Miller teaches at Bates as a lecturer.

“Everything intersects at that place of, how do we live together differently?” he says.

In addition to his teaching, Miller works with the community land trust Land in Common and lives at the Wild Mountain Cooperative, an agricultural collective in Greene (hence the mention of dish-washing, which takes on new dimensions of responsibility in a communal kitchen).

Each of those endeavors, in its own way, both reflects and informs his thinking about transforming humankind’s approach to living sustainably — a topic he explores in depth in the book Reimagining Livelihoods: Life beyond Economy, Society, and Environment, published last March by the University of Minnesota Press.

Miller uses Maine as his case study in this examination, and ultimate rejection, of a fundamental model of human participation in the life of the planet. In that scheme, we tend to see the human enterprise in terms of a chronic struggle to balance three competing needs — economic development vs. social well-being vs. environmental protection.

In Reimagining Livelihoods, though, Miller argues that the reason these forces are so hard to harmonize is that they don’t align with the way the world really works. With an emphasis on changing the ways we think about and engage in the relations that sustain us, the book proposes a new conceptual framework for discussing real sustainability. 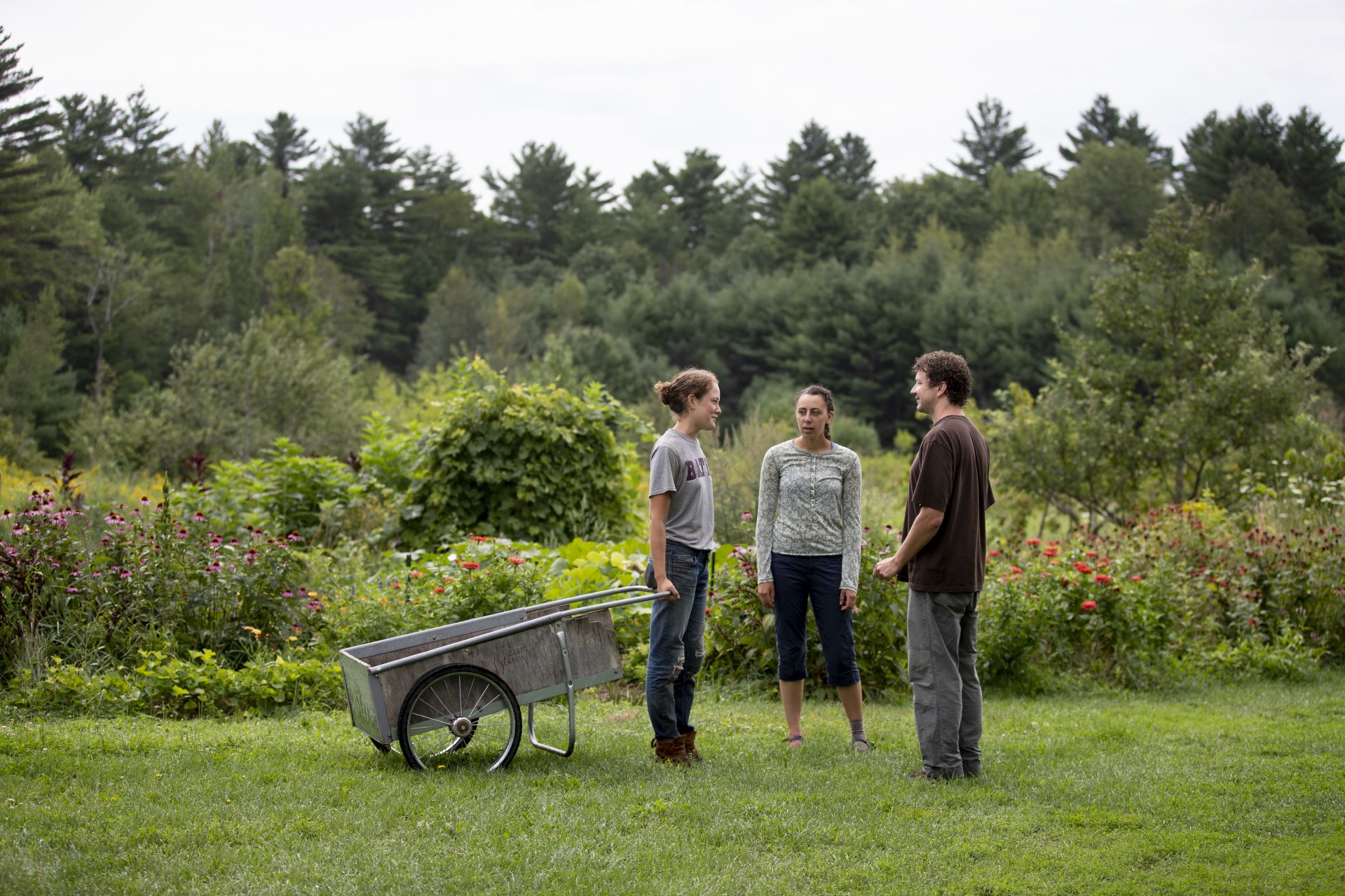 Katharine Gaillard ’19 (left) and Kyra Bleicher ’19, short-term residents at Wild Mountain Cooperative, chat with longtimer Ethan Miller. “It’s a great place to be inspired by dreams and schemes of the people and to create your own in the midst of it,” says Bleicher. (Phyllis Graber Jensen/Bates College)

What’s your critique of the economy-society-environment model?

We use those categories all the time to name our reality, and also to talk about solutions to contemporary problems. But there are at least two problems with that. First, these categories are historically specific products, or even symptoms, of the very way of life that we now so desperately need to question and transform. Should we be trying to solve our problems using the same terms that helped create them in the first place?

Second, our actual lives cut across these categories, blur them together in ways that are impossible to separate. Can’t we create analytical categories that more effectively describe our real struggles, questions, and aspirations? I want to open up space for imagining our realities and our possibilities differently, and to experiment with ways that language can encourage this.

I don’t necessarily expect that everyone will stop using “economy,” “society,” or “environment.” But I hope that people will scrutinize those categories more deeply and ask hard questions about their implications. And maybe they’ll be inspired to develop new concepts and terms that can help us build new possibilities for a viable future. 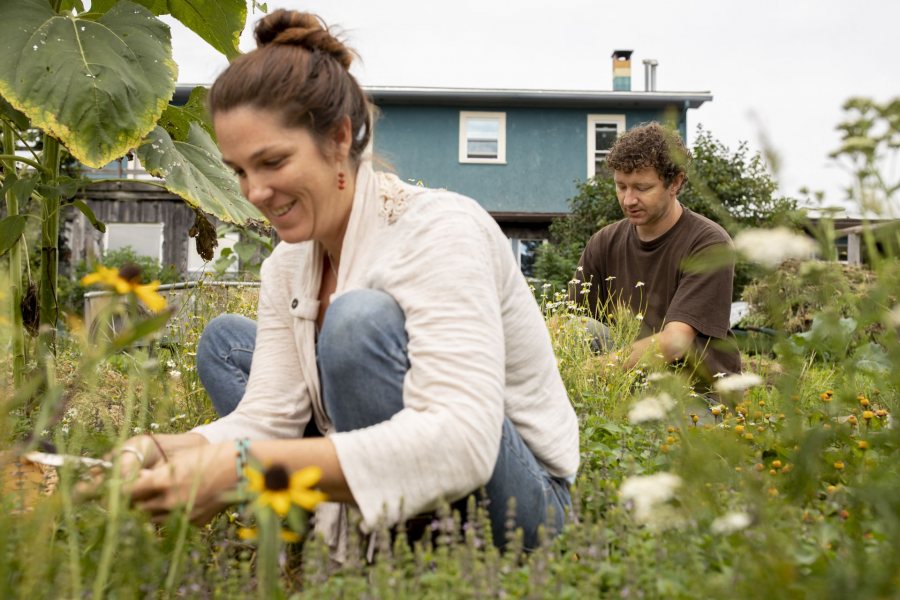 For the book you interviewed a lot of Mainers who in various ways represent the three categories. What’s a takeaway from those interviews?

I expected everybody to be totally wedded to those categories that they’re basically paid to reproduce and engage with. But, first off, I found that people in these realms don’t even agree with each other about what these things are.

And I was really offering challenges. I’d reflect back to, say, an economic developer, how many different definitions there are of that work. And it became really clear, really quickly, that nobody was really willing to defend the categories.

Across the political spectrum, at a certain point, nearly everybody would say, “Well, they’re just made-up categories, and it’s problematic to divide the world like that anyway. Things aren’t really clear-cut.” It’s a fog bank, as one person described it.

So I realized that there’s a deep intuition circulating among us that the ways we’ve thought about the world don’t work anymore. Something about our reality now has spilled out over all those categories, but we don’t know how to think or talk differently. So we’re stuck. I’m tempted to talk about them as zombie categories.

It seemed to me, also, that the further from those categories the conversations went, the more interesting it got. If we tear those categories open, and ask, “What are we really talking about here?” then suddenly there’s this whole world of nuance about the actual dynamics of livelihood that are at stake. 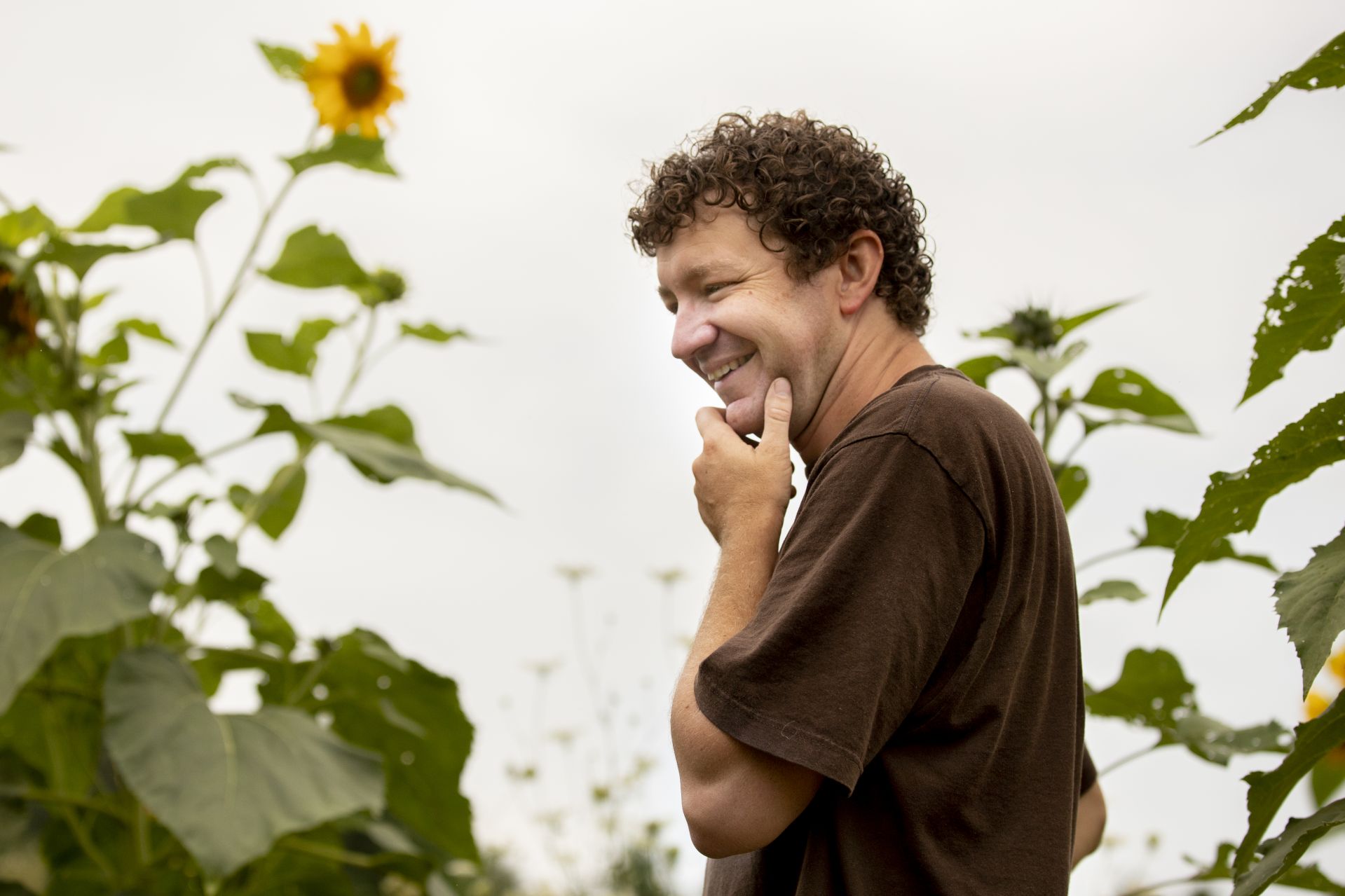 The starting point for that is a triad in which livelihood is produced at the intersection of three kinds of relationships.

There’s making a living, which is doing our own work to sustain ourselves. Second, there’s our being made by others, meaning that we’re all dependent on the labor of others — probably most of our livelihoods are made by others, and by others, I mean human others and non-human others, like the photosynthesizers who produce the oxygen.

Then the third part is making livings for others. That’s the way that we all participate in this circularity where a lot of what we do is oriented towards someone else. When we show up for paid work, a lot of us are often doing that for a family, right?

So I wanted to be able to think about livelihood as happening at that intersection. Then we can ask ourselves, in any situation, what are the actual relationships of making ourselves, being made, and making others? And can that open up a whole different conversation about how we survive together, and a different set of ethical coordinates to orient our decisions and our imagining of the kind of relationships we want to create? 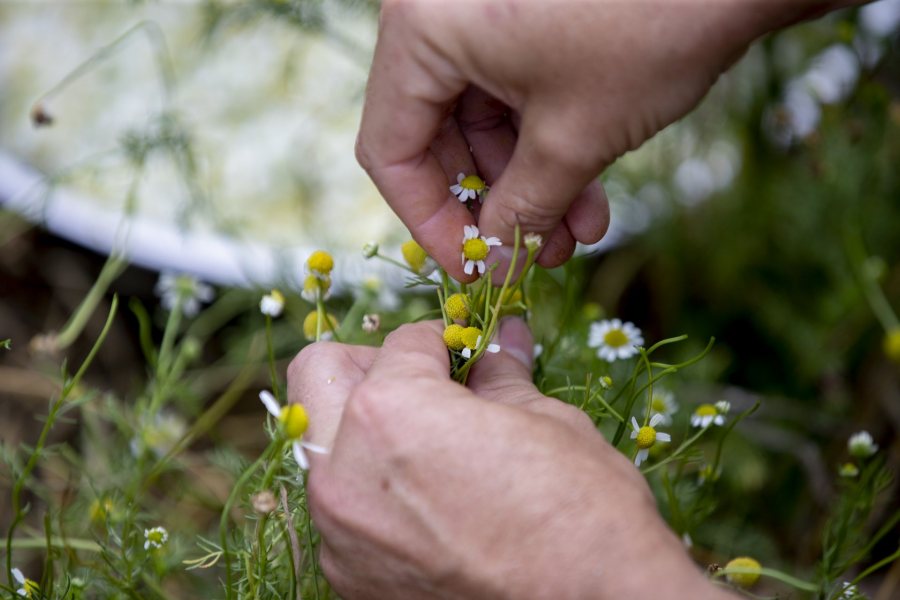 Your activism included a role with Maine Earth First! in resisting the massive Plum Creek residential development proposal at Moosehead Lake, an experience that informs the book. (The 2008 recession left Plum Creek’s rezoning plan in limbo and  Weyerhaeuser, with which Plum Creek merged in 2016, has asked the state to terminate the plan.)

That was part of what sparked me to go to grad school. It was so clear that the only reason the Plum Creek plan got approved was because we had no real alternatives. We had no serious way of thinking about a different pathway for development in our rural communities. I went away from that saying, “We’ve got to think about this more carefully.” So, in some ways, that set me on the path that I’m on. 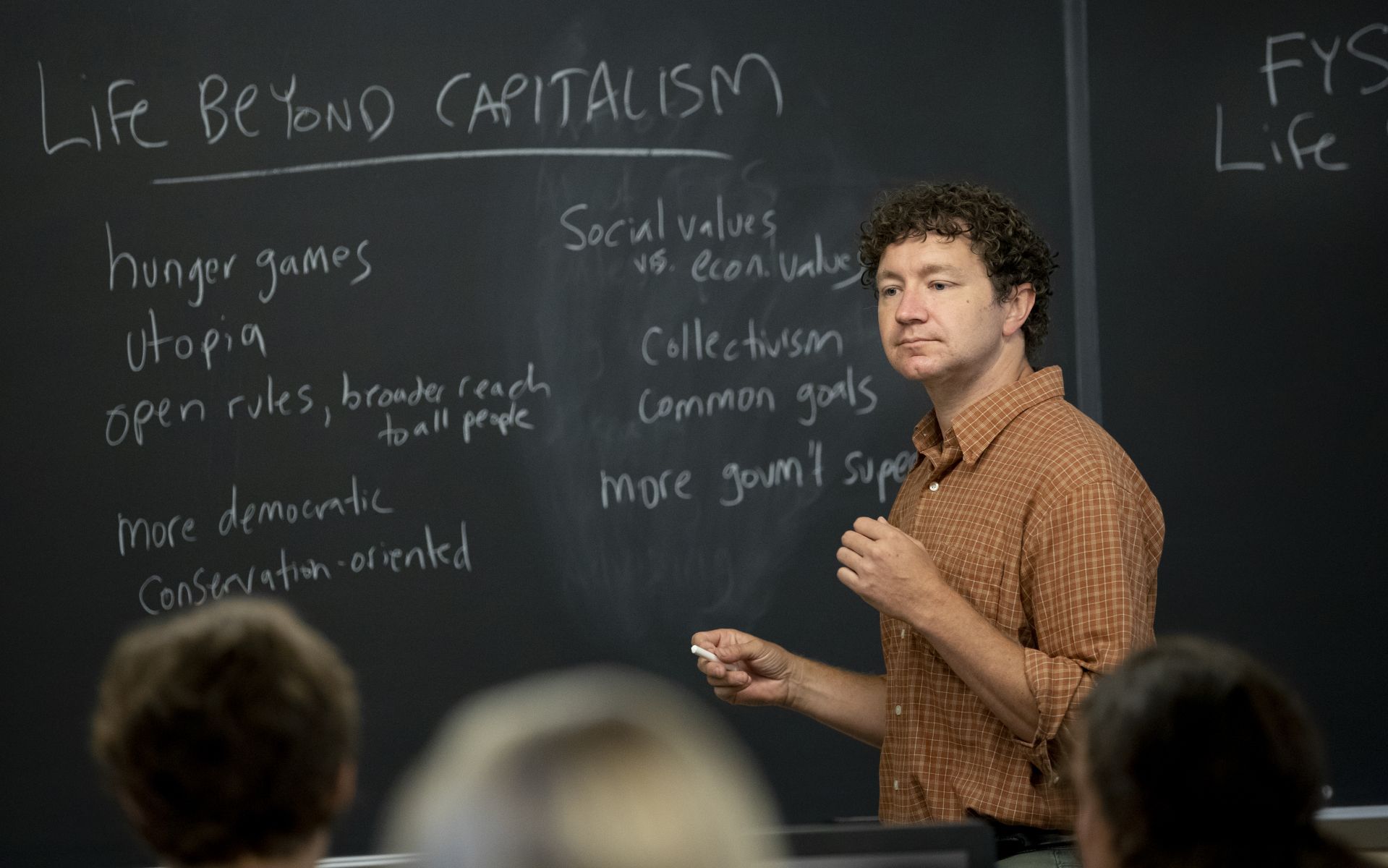 Your teaching at Bates touches on the intersection between political economy and ecology. How do your students respond?

I find that students are really hungry for tools for thinking about the world differently. There’s a certain kind of common sense among students — more than there was when I was a student — that many of the fundamental structures that we’re orienting our lives around are problematic, not reliable, need to be transformed radically.

I have mixed feelings about that question. Outside of my academic work, I’m involved in all kinds of efforts with a lot of different people, trying to enact these re-imaginings in really concrete ways. So I said to myself a while back, “I don’t want to write a book that my community is not going to read.”

But then I was convinced otherwise by some wise mentors who reminded me that I, among other people, really love good, in-depth theory books, and I benefited a lot from that kind of reading and thinking. And I got a lot of positive feedback about my dissertation, and was really encouraged to turn it into a book. People said, “It’s okay if it’s not for everybody, because it doesn’t have to be the last book that you write.” 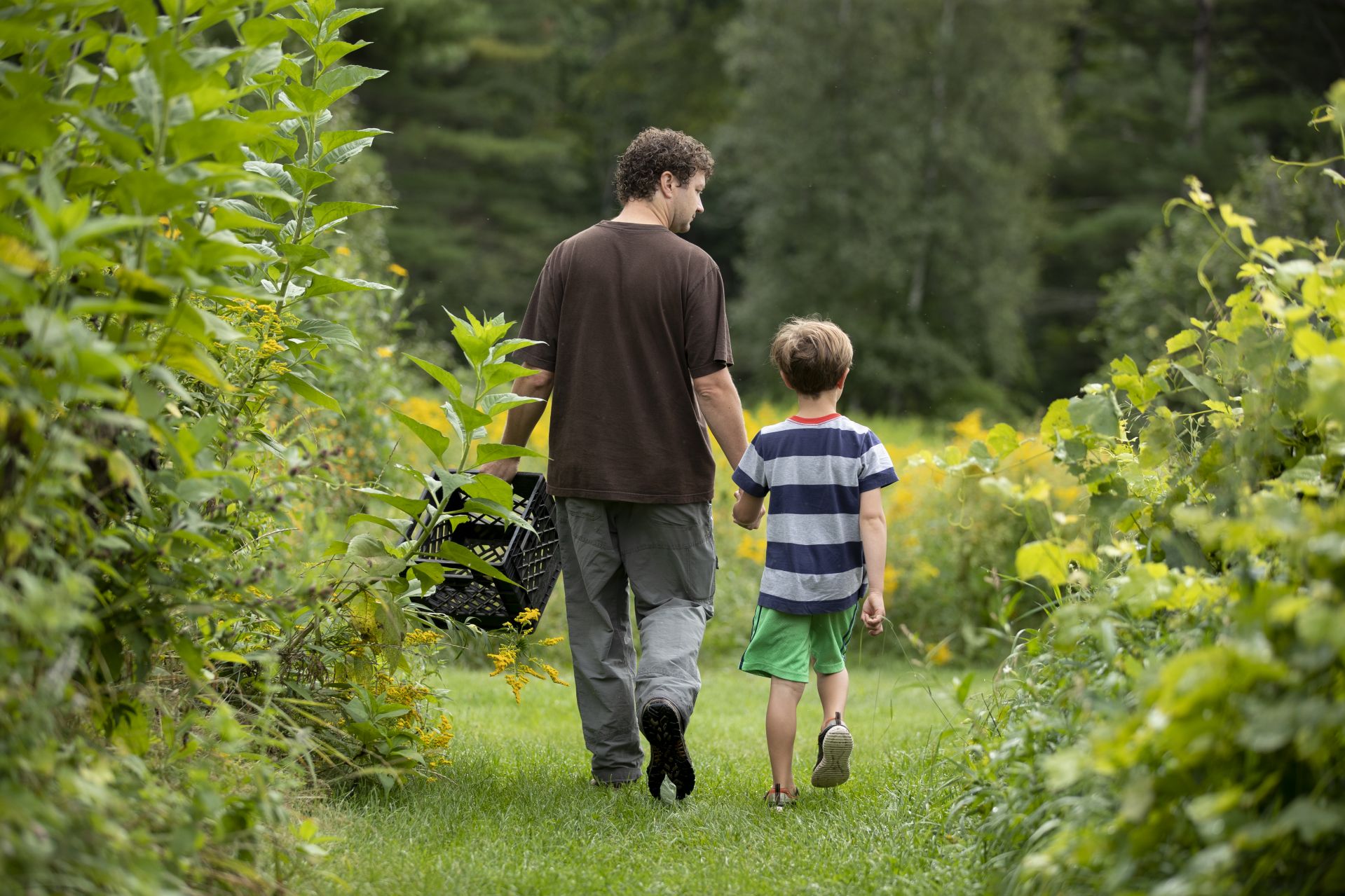 So, that’s always in my mind because the book is about Maine in a very real, intimate way. It comes from all these conversations with professionals in Maine and also from my own activist engagement. So I have to think about how to make those ideas more accessible and connective. That’s part of the next stage of the work for me.