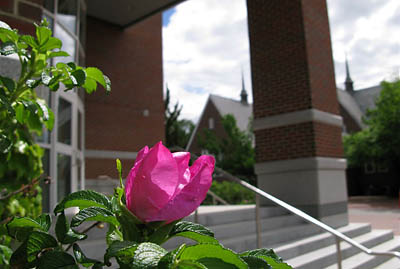 It was still late winter at Bates as we went to press for the Spring issue, so this June 2008 photograph of a rugosa rose in front of Carnegie Science was chosen hopefully. “The rose has been there since the Carnegie addition was put on, in 1990,” says landscape coordinator Bill Bergevin. “It likes sun, will grow well in dry locations, and is often seen along the coast. Hence one of its names: saltspray rose.”