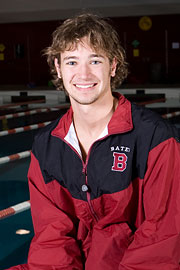 Bates senior Chris Berry (Augusta, Maine) finished his exceptional collegiate swimming career with the best weekend of his life last weekend at the NESCAC Men’s Swimming and Diving Championships. Berry broke or had a hand in breaking an astounding total of seven Bates event records at the meet, while the Bobcats set 13 new event records as a team.

In his final event, the 200 backstroke, Berry passed the torch, in a sense, to first-year teammate Nathaniel Depew (Hudson, Ohio). While Berry broke his own former program record of 1:57.10 in the event, finishing in 1:56.30, Depew raced even faster, finishing 11th overall with a time of 1:54.82. It was a poignant way for the team captain to finish out an outstanding career.