The ceremony takes place on the Historic Quad, where Coram Library provides the striking backdrop for the tradition-rich event. 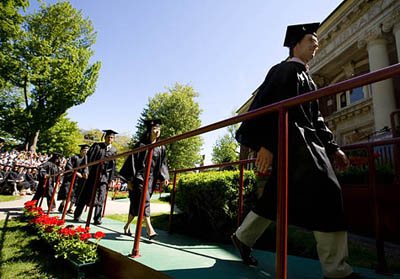 Geena Davis will receive the Doctor of Fine Arts degree. Watching children’s television one day with her daughter, the actress noticed that far fewer women than men appeared on the screen. This observation inspired the Academy Award-winner to assume an important new off-screen role. As founder of the Geena Davis Institute on Gender in Media, Davis supports research into the disparities between Hollywood’s depictions of women and of men. In 2008, the institute published a study by Stacy Smith of the Annenberg School for Communication, University of Southern California, which found male characters outnumbering females nearly threefold in a broad sampling of films. Even in scenes of crowds or animated schools of fish, Davis told the GDIGM Conference in 2008, “the worlds that kids are seeing are really bereft of a female presence overall.”

Born Virginia Davis in Wareham, Mass., Davis earned a bachelor of fine arts degree in drama at Boston University. A role on the critically acclaimed sitcom Buffalo Bill (for which she would write an episode) in 1982 launched a film and television career whose many highlights include the films The Fly, A League of Their Own, Thelma and Louise and the Stuart Little series. Davis won an Academy Award for her performance in 1988’s The Accidental Tourist and, more recently, the 2005 Golden Globe for leading actress with her portrayal of the American president in the TV series Commander in Chief.

She is a member of Mensa and tried out for the U.S. archery team bound for the 2000 Olympics, placing 24th out of 28 women in a qualifying competition.

Robert Franklin will receive the Doctor of Humane Letters degree. Cornel West calls Franklin “one of the most prophetic leaders and visionary thinkers of his generation.” An educator and author of national stature, Franklin is the 10th president of his alma mater, Morehouse College, a historically black institution and the nation’s largest liberal arts college for men.

Franklin’s major fields of study include social ethics, psychology and African American religion. A native of Chicago, Franklin has served on the faculties of the Divinity School at the University of Chicago, where he received his doctorate, and the Harvard Divinity School, where he received his master’s, as well as Colgate Rochester Crozer Divinity School and the Candler School of Theology, where he gained a national reputation as director of black church studies. As program officer in human rights and social justice at the Ford Foundation, he served as adviser on issues related to future funding for religion and public life initiatives. A frequent commentator for National Public Radio’s All Things Considered, Franklin has built a national platform on social ethics and community values.

In his latest book, Crisis in the Village: Restoring Hope to African American Communities, Franklin identifies crises in three anchor institutions that have played key roles in the black struggle for freedom — black families, the black church and historically black colleges and universities — and how they must address the rising rates of father absence, births to unmarried parents, divorce and domestic abuse or relationship violence. Franklin “exemplifies the best qualities of a Morehouse man,” says Morehouse Chairman of the Board Trustees Willie Davis.

Mimi Koehl will receive the Doctor of Science degree. The way a poet seeks an apt metaphor, this biomechanics researcher finds poetry and truth in the physical structures of living things. The Gill Professor of Integrative Biology at the University of California, Berkeley, Koehl once said that the organisms she studies “are beautiful if you simply look at them — but even more beautiful when you understand how they work.” A past recipient of a MacArthur “genius award,” Koehl combines techniques from fluid and solid mechanics with those from biology, working in the laboratory and, famously, the field, because to understand how form affects function, “you need to know what [an organism] does in nature.”

Koehl’s work has yielded important clues about how, for example, crustaceans pluck odors from the water and how sea anemones withstand crashing waves. In theorizing how insects developed wings, she conducted experiments deemed “elaborate and elegant” by the late evolutionary theorist Stephen Jay Gould.

Appreciating the natural world’s uncanny ability to solve problems, Koehl is a co-founder of CiBER, a Berkeley research and teaching center focusing on the new field of bio-inspired design of man-made devices.  A member of the National Academy of Sciences and the American Academy of Arts and Sciences, Koehl won the 2002 Borelli Award for outstanding career accomplishment in biomechanics, the 2008 Martin Award for research that created a paradigm shift in aquatic sciences and the 2009 Muybridge Award, the highest honor of the International Society for Biomechanics.

Initially an art major at Gettysburg College, she switched to biology and earned a doctorate in zoology at Duke University. In 2006 she published Wave-Swept Shore, a book that explains the challenging lives of sea creatures along a stretch of Pacific coast through a simple lens called “How?”

Ralph Perry ’51, a resident of Orrs Island, Maine, will receive the Doctor of Humane Letters degree. As one of Bates’ most generous philanthropists, Perry has supported programs and priorities that reflect his identity as a Maine citizen and businessman, his personal history and his devotion to his alma mater. “In Bates, we alumni have something that deserves to be preserved and strengthened with our generous financial support,” he once said.

A retired president of Maine-based Progressive Distributors and senior vice president of the Hannaford Bros. supermarket chain, Perry began his philanthropic commitment to Bates with a significant gift in 1979 to help fund the Charles Franklin Phillips Professorship in Economics, honoring Bates’ fourth president. In 1992, he endowed a major scholarship fund for Maine students who persevere in pursuit of their goals. “Young Maine people with high aspirations must be provided equally great opportunities,” he said.Following the death, in 1994, of his first wife, Joan Holmes Perry, Bates Class of 1951, he made a gift in her memory to create a three-story, 8,000-square-foot atrium within Pettengill Hall.

In 1999, Perry and his second wife, Mary Louise Seldenfleur, endowed a professorship in the biological sciences in honor of their friend, Dr. Helen A. Papaioanou ’49, and made further gifts to support scholarships and academic programs. Three years later, the couple helped Bates establish the Mount David Summit, an annual student academic celebration held in Perry Atrium. “Athletes get recognition in various ways. Scholars deserve recognition too,” said Perry, a 1951 Bates history major who played varsity football, baseball and basketball and was, in 2005, the inaugural alumni inductee into the Bates Scholar-Athlete Society.

Of his and his wife’s philanthropy, which has also supported Maine cultural, conservation, and healthcare institutions, Perry said, “We try to improve the quality of life for Maine people.”

Fareed Zakaria will receive the Doctor of Humane Letters degree. Zakaria, described by Esquire magazine as “the most influential foreign policy adviser of his generation,” is widely respected for his ability to spot economic and political trends around the world. Zakaria’s cover stories and columns  on subjects from globalization and emerging markets to the Middle East and America’s role in the world — reach more than 25 million readers weekly. He also is the host of a weekly international news program, Fareed Zakaria GPS, that airs on CNN worldwide.

His national bestseller, The Post-American World is about the “rise of the rest”  the growth of China, India, Brazil and many other countries — and what it means for the future. His previous bestseller, The Future of Freedom, has been translated into 20 languages and was called “a work of tremendous originality and insight” by The Washington Post. Born in India, he earned his bachelor’s degree at Yale and his doctorate in political science at Harvard. He has served as an analyst for ABC News, a roundtable member on This Week with George Stephanopoulos, and host of Foreign Exchange on PBS.

At age 28, he became the youngest managing editor in the history of Foreign Affairs. One of Jon Stewart’s favorite guests on The Daily Show, Zakaria has appeared on Charlie Rose, The NewsHour and BBC World News and written for such publications as The New Yorker and The New York Times.

Reliving “A Night of Alchemy”