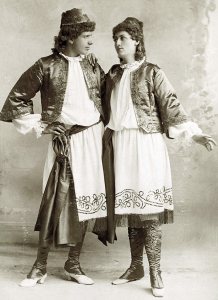 This photograph from the Special Collections Library shows Fred A. Knapp, Class of 1896, and Emily B. Cornish, Class of 1895, in Shakespeare’s Twelfth Night, staged at Bates in November 1893.

We assume that Knapp and Cornish played the lead characters, Orsino and Viola, in Shakespeare’s gender-bending comedy of mistaken identity.

[Recently, Matteo Pangallo ’03 , in the Ph.D. program in English at the Massachusetts Center for Renaissance Studies, pointed out that the identical costuming in the photograph clearly suggests that Knapp and Cornish were playing the separated twins, Sebastian and Viola, and not Duke Orsino and Viola.]

The fall of 1893 saw another gendered story play out at Bates. For the first time since the school’s founding in 1855, the “young ladies of the freshman class at Bates outnumber the young men,” The Bates Student reported.

And the men were not happy. “Should this continue until the feminine gender prevails the consequences would not be pleasant to dwell upon,” the Student reported.

But let’s cut the guys a little slack. This was late in the Gilded Age, and a heightened notion of manliness and masculinity was in play in American society. At many colleges, the new sport of football, established at Bates in 1893, was praised as the masculine sport. Football demanded “coolness and nerve…courage,” the Student wrote. If played in a “manly” way — without the “slugging” that marred the game — football could develop “more self-confidence and manliness” than even baseball or tennis, then the popular fall sports.

(On a national scale, this notion of manliness was also about “promoting a sense of America’s growing white imperial power — think of Teddy Roosevelt charging up San Juan Hill,” says Associate Professor of Women and Gender Studies Rebecca Herzig.)

So you can see why the Bates boys were feeling pressure to be, as Monty Python once sang, “Men, men, men.”

Responding to the Student’s comments about female enrollment was a blistering letter from William Bertram Skelton, Class of 1892, who would become a Lewiston mayor and lawyer. Fear was motivating these critics, he charged — fear that women were making Bates a more rigorous place.

He put critics into two groups. One included students “who do not succeed in causing their light to shine with quite as much dazzling splendor as they anticipated.” The second group were playboys and heathens who “have a little money and who go to college largely…to free themselves of all civilized restraints, let their hair grow long, befog their brains, stew their stomachs, and blast their reputations with dissipation, and reform afterward.”

Get over it, Skelton said. Instead, work to build up the College. “Help to put some hustle into the thing,” he wrote.

The woman in this photo, Emily Cornish, certainly hustled, and her life told another gendered story of that era. She studied at Emerson College, earned a master’s from Bates in 1899, and later taught at colleges and schools — until 1911, when she left teaching to marry botanist Walter W. Bonns.