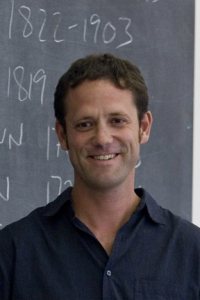 Jonathan Skinner, assistant professor of environmental studies at Bates, reads from his own poetry and from the poetry journal that he edits, Ecopoetics, at 11:30 a.m. Thursday, Oct. 15, in Chase Hall’s Skelton Lounge, 56 Campus Ave.

The event is part of the Envirolunch series, a weekly community gathering around environmental topics at Bates, sponsored by the Environmental Studies program. A question-and-answer period follows the reading.

Skinner is a published poet and also writes “ecocriticism” on contemporary poetry and poetics — essays that explore the role of aesthetics in intersections between nature and culture, and the role of language in our perceptions of the natural world. He is interested in soundscape studies, including the art of bird song.

His emphasis on relations between cultural diversity and biodiversity has also led him to work in ethnopoetics, the dialogical engagement with cultures based in non-Western languages.

In addition, he has published poetry translations from Spanish, French and Old Occitan, a distinctive Latin-derived language of southern France.

The journal Ecopoetics focuses on creative-critical intersections between writing and ecology. Learn more.