For a group that’s made its mark on the great outdoors, the Bates Outing Club sure had a nifty time indoors at the Maine State House in January, meeting and greeting Bates friends, being welcomed by Gov. John Baldacci, and generally enjoying some hoopla around the 90th anniversary of the club’s 1920 founding. 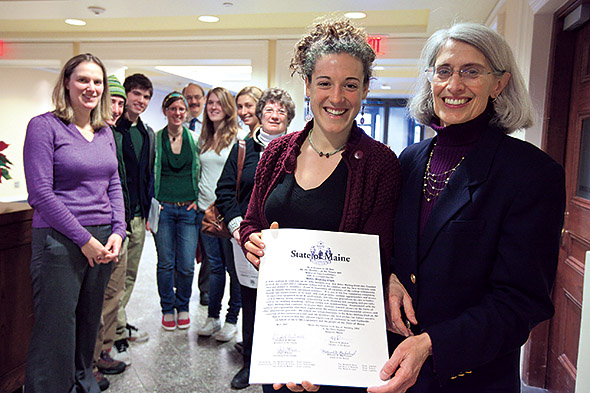 A Legislative Sentiment was read into the record, and Rep. Peggy Rotundo, D-Lewiston, spoke from the floor, telling fellow House members how the BOC helped to extend the Appalachian Trail into Maine. “By 1933, most of the Appalachian Trail was nearly complete,” Rotundo said. But Maine wilderness was “seemingly impenetrable,” with some suggesting that the trail should end in New Hampshire.

“We are part of an important continuum of outdoors advocates and enthusiasts.”

Led by Professor of Botany William H. Sawyer Jr., a 1913 Bates grad and BOC adviser, students Samuel Fuller ’35, Harold Bailey ’36, and Edward Aldrich ’35 scouted and blazed the rugged last section of the Appalachian Trail, a 40-mile stretch between Baldpate Mountain and Long Pond in Rangeley. They completed their seven-day project on June 29, 1934. (View story about the BOC helping to complete the Appalachian Trail.)

Completing her remarks, Rotundo gestured to the BOC cohort in the visitors gallery, drawing warm applause from the pols.

Making the State House rounds, the BOCers were greeted by members of the Lewiston delegation, including Rep. Dick Wagner, professor emeritus of psychology, as well as senators Gerry Davis ’59 and Kevin Raye ’83. They chatted briefly with Brownie Carson, longtime executive director of the Natural Resources Council of Maine.

BOC adviser Judy Marden ’66 said the event “reinforced the feeling that we are part of an important continuum of outdoors advocates and enthusiasts.” For students, it was a revealing jaunt outside the Bates bubble. “That was awesome,” said BOC president JeanMarie Gossard ’10 of Andover, Mass. “We were flabbergasted, really. Most students did not know how far-ranging the impact of the Outing Club has been.”

“The Bates/BOC vibe traveled with us.”