Ask Me Another: Cynthia Baker and the fraught identity term ‘Jew’

Associate Professor of Religious Studies Cynthia Baker is something of an expert on the dynamics of households and communal spaces in ancient Judaism. So when the editors of the book series Key Words in Jewish Studies invited her to submit a proposal, she suggested the word “space.” Sorry, she was told, that’s already taken. 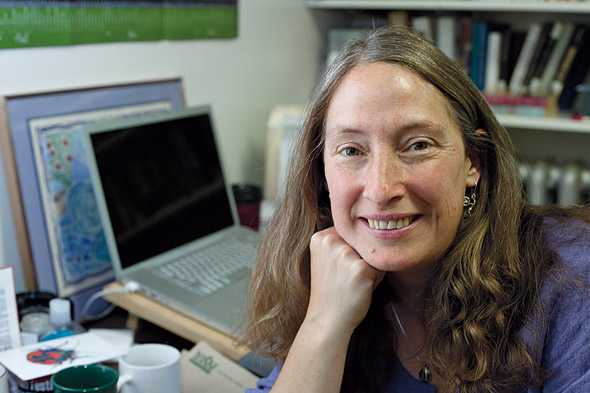 So Baker got right to the point and suggested looking at the word “Jew” itself. Her proposal was readily accepted and, in fact, recently won a National Endowment for the Humanities grant for Baker, who spoke with Bates Magazine editor Jay Burns.

What new do you bring to this topic?

Some studies have looked at the origins of “Jew,” others at the Jew in modern European theater or in contemporary American literature. But no one has conducted an analysis of the term with this kind of sustained attention and historical spread.

When someone asks why the term “Jew” is unique, what do you say?

Being a professor, I generally answer a question with a question. Can you think of any other word that is both a term of great pride and so obviously an epithet that it demonstrates that a hate crime has been committed? “Jew” is not an ethnic slur, but it certainly can function that way. The word “queer” is a taunt that has been reclaimed, but “Jew” didn’t originate as a taunt and often serves as a term of honor.

Was the term always complex?

It derives from a geographic location that the Bible calls “Judah” and, later, “Judea.” But from its earliest appearances, the term “Judean,” from which we get “Jew,” seems fraught and troubled, being applied on the one hand to only some of the people who lived in that region, and on the other hand to people who were unwelcome minorities someplace else.

Will you confront the question of “who is a Jew?”

Absolutely. First, it’s important to know that right up to the cusp of modernity, defining “Jew” preoccupied non-Jews far more than it did Jews. Both the Old Testament and the classical Jewish document, the Talmud, for example, speak of “Israelites,” not “Jews.”

Christianity. In the New Testament, “the Jews” are used as a foil for what comes to be known as Christianity. Yet most of the New Testament’s primary authors — Matthew, Mark, John, and Paul — were Jews. Depending upon how you define “Jew,” of course. The formation of Christianity is the single most important phenomenon that gives “Jew” its various dimensions today.

Besides the first and the 20th centuries, what other historical eras most inform the term “Jew”?

The next era would be the Jewish emancipation of the 18th and 19th centuries. With the liberation and enfranchisement of Jews who had been largely confined to the Pale of Settlement in the Russian Empire or the ghettos of Europe came new debates on Jewish identity among both Jews and non-Jews alike. Are Jews a religious group? A separate race? A nation within a nation? The Jew doesn’t quite fit into any of the grand Enlightenment schemes, and we begin to see seemingly contradictory identities imputed to Jews. For example, “the Jew” becomes emblematic of socialism but also becomes the stereotype of the capitalist.

What do you make of the trading of “Jewish” for “Jew”?

Saying “Jewish” softens the word, almost as if there were etiquette involved. But then the question becomes, what’s going on psychologically, sociologically, and anthropologically in that aversion or adaptation?

How will you explore the Holocaust?

I don’t have any radical new insights to offer there. In one sense the Holocaust is unfathomable. Yet at the same time it obviously represents a nexus of historical and cultural dynamics that are nameable and traceable, and to which the term and figure of “the Jew” are absolutely central.

In Annie Hall, Diane Keaton says to Woody Allen, “You’re what Grammy Hall would call a real Jew,” and he replies, “Oh. Thank you.” Why does that line get laughs?

Because it precisely encapsulates everything we’ve been talking about. “Jew” is always two things at the same time, and humor is about concisely encapsulating that kind of collision. In this case, the collision is around the content of the word “Jew” and who gets to define “real Jew.”

Is your own identity relevant to this project?

No doubt. But I wouldn’t say that I’m looking for answers in that respect. My life as a scholar, an occasional public intellectual, a teacher, or even at home in my garden tends to be much more about questions than answers. At dinner the other night, a colleague made the offhand comment: “Oh, Cynthia, she’s always been this kind of liminal character.” The word “liminal” suggests “in between” — the psychological, spiritual, and physical place between point A and point B. That’s where I feel most at home, most myself — and in that sense, this project, this “Jew,” has everything to do with who I am.