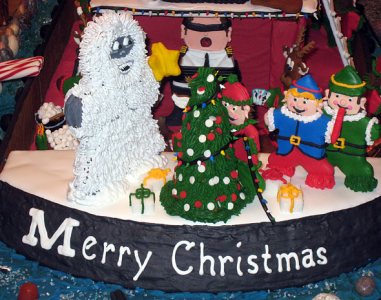 Nineteen years ago, after seeing a friend’s gingerbread house, Brown created her own, covered it with candy and was done. “Then,” she says, “I got bored and started going a little crazy.”

She now spends several weeks each year’s creation, including lots of research. The year’s theme has Santa and friends taking over a Portsmouth tugboat, so Brown photographed the tugboats, then created graph patterns for each part of the boat. “Here I can really play with the math,” says Brown, a Bates math major and former math teacher.

Then she adds her signature details, decorations and characters. This year, that included “Bumble,” from Rudolph, famously putting the star on a Christmas tree. 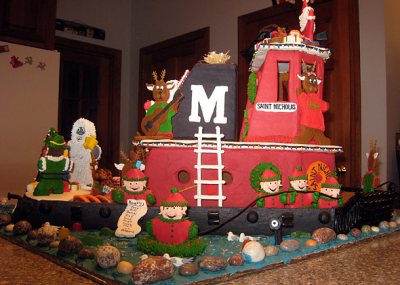 One year’s theme featured a Monty Python’s Holy Grail-style castle. Another year, one of her sons suggested a rock concert, so Brown featured the band Tool, a group that employs fanciful, detailed artwork on their CD covers.

“She a little obsessive about it,” says son Camden Brown, “but you have to be to have it come out well.”