Hiroya Miura, conductor of the Bates College Orchestra and a native of Japan, has announced that the orchestra’s March 19 concert will serve as a fundraiser for a town where 1,000 people are thought to have died during the devastating March 11 earthquake and tsunami.

The orchestra performs music by Beethoven and Richard Strauss at 7:30 p.m. Saturday, March 19, in the Olin Arts Center Concert Hall, 75 Russell St. Donations to a relief fund for the coastal town of Yamamoto-cho, 24 miles south of Sendai, will be gratefully accepted.

NBC affiliate WSCH-TV interviews Hiroya Miura, conductor of the Bates College Orchestra, prior to the March 19 concert that raised funds for the people of Yamamoto-cho, Japan.

For more information or to reserve seats, please contact 207-786-6135 or olinarts@bates.edu.

Miura was born and raised in Sendai, near the epicenter of the earthquake, and his parents currently reside in Yamamoto-cho. According to Wikipedia, the town is one of the areas hardest hit by the quake.

The orchestra will dedicate the concert to the memory of those lost in the disaster, and Miura will personally see that audience donations are delivered to the mayor of Yamamoto-cho.

For people unable to attend the concert, donations can made online at www.batestickets.com or mailed to:

The orchestra will play Beethoven’s landmark Symphony No. 3 (“Eroica”) and Richard Strauss’ Serenade for 13 Wind Instruments, works that “are full of youthful energy from these two German composers,” Miura says.

The Beethoven symphony is a milestone in symphonic music, a work marking the transition from the formal strictures of the Classical period to the more emotional, organically unfolding style of the Romantic.

The Strauss serenade, meanwhile, is the earliest composition by this late-Romantic composer to endure in the repertoire. It’s scored for flutes, oboes, clarinets, horns, bassoons, contrabassoon or tuba, and bass.

“Eroica,” which Beethoven completed in 1803, was written as he was coming to grips with hearing problems that would culminate in total deafness.

“It was probably the first time in history that a symphony became so intensely personal and dramatic,” Miura says, “and the ‘Eroica’ was by far the longest, and perhaps the most substantial, symphonic work of its time.” 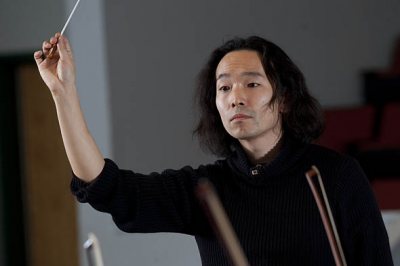 The work makes bold use of brass instruments, especially French horn, “and it’s no surprise that the ‘Eroica’ was one of the most influential works for young Strauss, whose father was an orchestral horn player.

“It’s also no coincidence that this serenade by the hand of 18-year-old Strauss is in the key of E-flat major, the key of the ‘Eroica’ and Strauss’ later work ‘A Hero’s Life,’ ” Miura says. “I hope the audience will enjoy the virtual musical dialogue between young Strauss and Beethoven in these two works.”

The orchestra concert comes days before two Miura compositions will be premiered at the JapanNYC Festival organized by Carnegie Hall, with Seiji Ozawa as artistic director, in March and April.