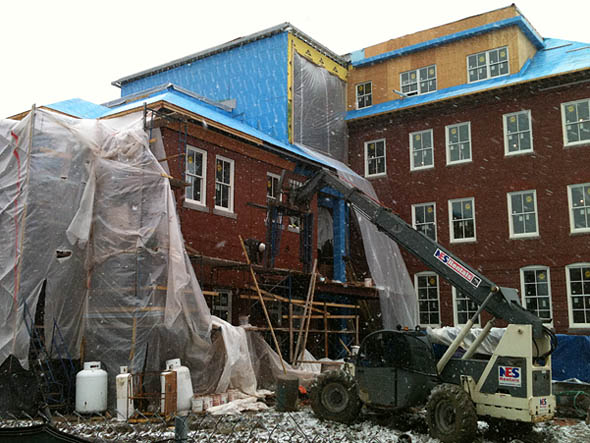 If a contractor told us that it was time to flood our ceiling, we would take exception. For one thing, it would make a big mess. For another, we can flood our own ceiling, thank you, and often have.

Actually, as it turns out, when a ceiling contractor floods a ceiling, it’s not with water (that’s our method) but instead with acoustic ceiling tiles. You hang your grid, run in the smoke and motion detectors, lights, sprinkler heads and other gizmos, and then you put in all your tiles — in contractor-speak, “flooding” all that open gridwork.

That will be happening soon at Hedge Hall, as the ceiling grids have been started everywhere but the third floor, says project manager Paul Farnsworth. It’s just one facet of the progress being made inside the building.

South Portland-based Van de Graaf Painting has put the primer and first color coats everywhere except the stairwells. Tiling is done on the bathroom floors and walls, and fixtures will soon be hung. Wiring for computers and phones is being pulled throughout Hedge. And Aubin Woodworking of Bow, N.H., is continuing to install cabinetry, windowsills, etc. 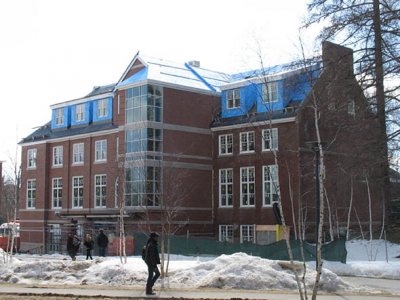 Finally for the inside, the devices that heat and cool the building — not at the same time, thanks to modern technology! — are being hung throughout Hedge. These use hot water to radiate heat and chilled water to remove heat, both from campus-wide circulating systems. Another part of the system will control the humidity of incoming fresh air to achieve desirable moisture levels.

“They’re hanging the guts of the valance units right now and then there’s a cover that snaps on,” says Farnsworth. “We’ve asked for one room to be fitted out so we can approve how it all comes together. We knows from the catalog what it’s supposed to looks like, but we want to see one all put together.”

You know the end is in sight, construction-wise, when people start talking about landscaping. And that’s on the table for the area around Hedge Hall, says Farnsworth.

Weather permitting, Farnsworth says, rough landscaping should begin on the Alumni Walk side of Hedge around the beginning of April — as in grading, the pouring of retaining walls, etc., in and around what will be a kind of courtyard. Grass and shrubbery won’t appear till late in the game. 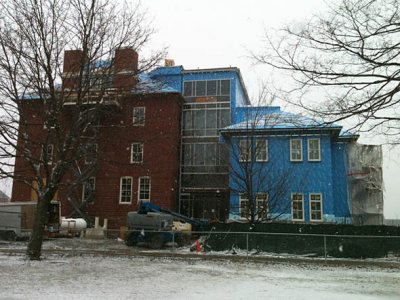 On that same side of Hedge, the entrance to the building is taking shape. The interior doors have been hung in the vestibule, and an awning over the entrance and floor slab down below are under way.

As for the exterior, what you see is increasingly what you will get. The major work is all but done. There are just a few patches of roof left to cover with slate, and the north-facing dormers to sheathe with gray ContinentalBronze copper, matching those facing the historic Quad. (The same material will cover the dormers at Roger Williams Hall.)

Speaking of the Bill, the main attraction continues to be the new sections of the building — the three-story office wing near New Commons and the stair tower connecting the old portion of the building. On the office wing, masons are done laying brick and granite on the northern, Alumni Walk side — the staging was coming down as this was written — and will soon swing around to the side facing the library. They’ll also pick up the pace on the wall facing Alumni Gym.

And the glass walls — aka “storefront” — on the library side of the stair tower are all but complete. Once the masons leave the northern, Alumni Walk side, the storefront crew can get to work on that face of the tower. 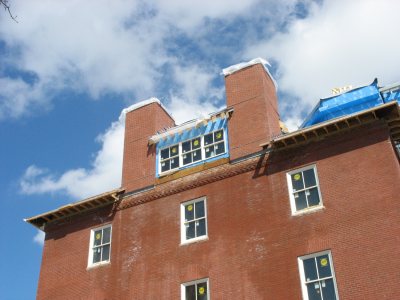 On March 15, workers riding a lift were installing white decorative pieces under the eaves on Roger Williams, plastic-resin replicas of gingerbread that was original to the building. Also in the cosmetic realm, masons have finished bricking over the faux chimneys, overlooking the library quad.

All the while, of course, workers in myriad trades continue the conceptually intriguing work of defining undefined space. That is, building rooms. In-wall plumbing installations have been inspected from the ground floor through the second, and the electrical all the way up to the third.

And, says Farnsworth, sheetrock hangers are going full-tilt, with the ground floor done and the first floor nearly done, with just a classroom left to finish.

“If you had passed by on March 17, you’d have seen that they were loading up the building with a lot more sheetrock,” he says. We’re sorry we missed it, but we were busy flooding a ceiling.

Read about repairs to the College Chapel. 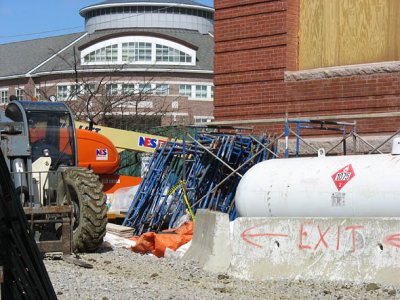