The voice belongs to Icelandic geophysicist Páll Einarsson, the outside examiner for Runnals’ thesis defense held this April morning in a Pettengill Hall seminar room. Einarsson, teleconferencing from the University of Iceland, is questioning the final slide of Runnals’ brief public presentation. “You have this picture up, yah? With these arrows? And where do these arrows come from?” 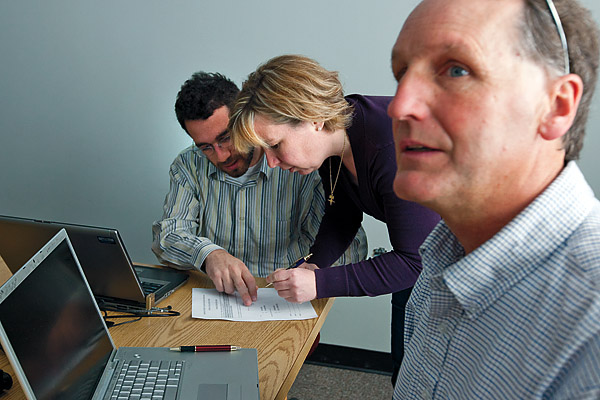 “The arrows show the spreading direction of the plates, from the Nuvel 1A model,” replies a confident Runnals, who knows Einarsson from doing Bates-funded honors research in Iceland last summer.

Maybe because Runnals’ words needed to travel to Iceland, there was a lull before Einarsson asked a less geologic and more Socratic question. “The question really is, how do people find these spreading directions?”

With that, the gloves come off.

Each year, a bit more than 10 percent of the senior class undertakes a yearlong honors thesis. Compared to the regular thesis (completed by 98 percent of seniors), the honors version requires greater mastery of the topic at hand, and it’s more intense and ritualized.

There’s no wiggle room on any deadlines. This year, the candidates had to turn in their black-bound tomes by 3 p.m. on March 25, and all candidates had to face one final test unique to the honors program: the oral examination, or defense, before a panel of scholars.

While not as bedeviling as, say, “What’s the sound of one hand clapping,” the panelists’ probing questions effectively remove the training wheels and push the candidate away from certainty. Like this one posed to a biology major: “Why didn’t you explain the significance of the statistically insignificant differences?”

Runnals, of Wolfeboro, N.H., used extensive fieldwork in Iceland to theorize that faults and fissures found on the Reykjanes Peninsula are due mostly to volcanic eruptions rather than earthquakes. 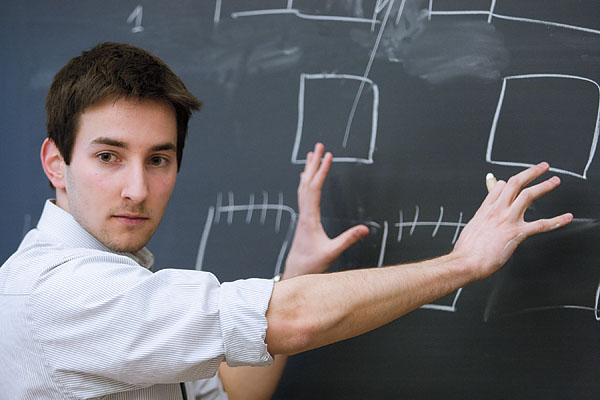 For most of the year, honors students lead a cloistered existence. Submitting the thesis begins a metamorphosis from private thinker to public scholar, from the “intimate experience of working with a faculty adviser, to the external experience of defending your ideas to distinguished scholars,” says Dean of the Faculty Pamela Baker ’70.

That’s how Beck felt. “When I wrote my thesis, I felt like a student — working with my adviser, Margaret Imber, to learn the topic and structure my argument.” Then everything changed for the defense. “Answering questions from scholars, I felt like a peer.

“That was really cool.”

The Bates honors program goes back to 1927, but the current form emerged in the 1970s during President Hedley Reynolds’ ambitious tenure. By expanding the faculty, Reynolds gave professors time to dig deeper into their own academic research and time to guide students into more specialized honors work.

Reynolds and his deans added outside examiners to the honors process, which had an ulterior motive, recalls Reynolds Professor of History John Cole. “To create a first-class institution, Bates needed a first-class reputation in graduate programs,” he says. “The initial goal was to bring in outside examiners from graduate schools to see our best students.” 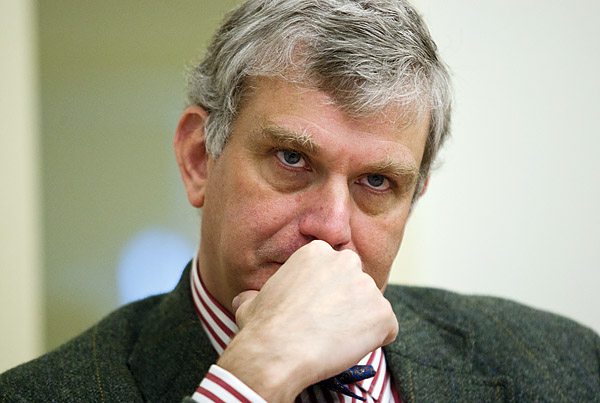 Such star power was in play for Andrew Beck’s thesis defense, held in the classical and medieval studies lounge in Pettengill Hall a day after Runnals’ session. Initially, the gathering feels casual until panelist Cole looks around and says, “Let’s deregularize these chairs.” The curtain has opened.

For his analysis of Cannae and Zama, Beck drew upon the book Soldiers and Ghosts: A History of Battle in Classical Antiquity, a highly praised analysis by University of Virginia history professor J.E. Lendon.

As the panel positions itself in the lounge, filling up on coffee and cookies, suddenly there’s J.E. Lendon himself at the door. It’s like the Annie Hall scene where Woody Allen pulls Marshall McLuhan into the conversation so McLuhan can tell the guy, “You know nothing of my work!”

But at Bates, Lendon has been invited into the scene not to bury Beck but to challenge him and, after Beck answers the challenge, to praise him.

As the defense begins, most of the verbal parrying is between Lendon and Beck. A photographer circles the room as they talk about the trustworthiness of ancient sources; whether the Carthaginian interest in commerce influenced their military culture; and whether Beck makes a misstep by introducing the oft-quoted Chinese military theorist Sun Tzu.

“Why did you use Sun Tzu?” Lendon finally asks, point-blank. “Certainly there other equally boring observants of war,” he adds, noting that he thinks Sun Tzu’s insights can be “pretty feeble.”

Beck replies, “I was trying to make a point about battlefield principles in an interesting way.”

Lendon, who, like other examiners, is paid $200 plus expenses, afterward grants that Beck’s citing of Sun Tzu is sound. Lendon says that, generally, one’s argument is improved by introducing a variety of ideas from outside the specific topic at hand. “But the proof is in the pudding,” he says. “Is what you bring in helpful?”

In Beck’s case, the answer is yes. “The level of discourse was very high,” Lendon says, “the sort of discussion I would have in a graduate seminar.” And that’s really the point of the enterprise, he adds. “At the culmination of an education, we treat the students as one of us, even for a brief period. Sometimes it’s a disaster, and sometimes it works incredibly well, as it did here.”

Beck is now in Baton Rouge, La., on the City Year program, mentoring in local schools and participating in education-related projects.

Over in Carnegie Science Hall, Carolynn Harris’ defense is dizzying. Ostensibly biology, her work is rampantly interdisciplinary, also including geology, archeology, and history.

biology, is joined by geology professor Bev Johnson, who worked closely with Harris on aspects of her research dealing with isotopic analysis of ancient fish bones.

“Navigating between the two of us has been hard enough,” Ambrose quips early on.

Harris’ thesis investigates ancient ecosystems by comparing the eating habits of various fishes, historic and current. That’s done by looking at carbon and nitrogen isotopes in their bones: ancient bones selected by Harris from prehistoric sites on Penobscot Bay, and current samples taken from fish purchased at a Portland fish market and elsewhere. 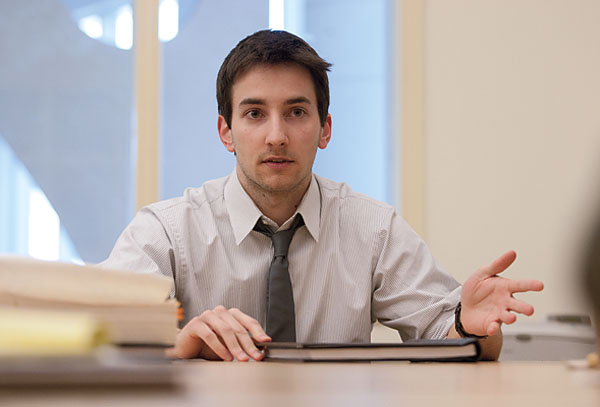 Andrew Beck ’11 is now in Baton Rouge, La., on the City Year program, mentoring in local schools and participating in education-related projects.

Working in the college’s Environmental Geochemistry Laboratory, Harris scoured the bones with a Dremel tool and bathed them in hydrochloric acid and sodium hydroxide. She then measured the bones’ isotopes using a stable isotope mass spectrometer, one of the few such machines in Maine designed to analyze modern and ancient organic matter.

Her findings support ongoing Bates research, led by Johnson, that tells us something rather surprising about Maine’s ancient fish habitats and fish populations: They began to change well before Europeans arrived along Maine’s coastline.

Native peoples  caused some changes by fishing, but the reasons for other important habitat changes remain unknown, such as the decline in eelgrass beds.

“And some jerk is always going to challenge you.”

The multiple disciplines present at Harris’ defense means whiplash questions. A professor reminds Harris to distinguish between “fish” and “fishes.” Another wants to know how climate change affects sculpin distribution in Penobscot Bay, and why she used the Maquoit Bay environment in Brunswick as one baseline. And, for goodness sake, why didn’t she include clams in her research, too?

Challenging the candidate has a larger purpose, explains outside examiner Kelton McMahon ’05, a biology postdoc with the Woods Hole Oceanographic Institution who also had the Ambrose-Johnson advising team for his honors work.

“You will always have to make certain assumptions about your work,” he tells her during a brief lull. “And some jerk is always going to challenge you.”

When challenged, the educated liberal arts graduate needs to be able to move beyond easy assumption but stop at the precipice of speciousness. “You have to be completely honest about the limits of your equations or variables or assumptions,” McMahon explains. “Be confident — but also be able to explain how your interpretations might have to change.”

McMahon also talks about being a public scholar. He shares a story about going through customs in Los Angeles and meeting the R&B singer Ciara. She asks the usual question: what McMahon does for a living. “I had two minutes to make my research understandable.” (He is finding ways to learn the location of fish habitats merely by measuring isotopes in their bodies.)

A scholar should be able to explain his or her work to the public, McMahon says, whether in an elevator or going through customs, “in a way that answers their question, ‘Why should I care?’”

After fielding all the questions, Harris, who is working with a marine laboratory this summer, takes a breath and announces, unprompted, that despite all the assumptions she’s had to make, “I stand by my conclusions.” The group laughs in appreciation. “We’ve all been there!” says biologist Ronald Barry.

During Runnals’ defense, Einarsson’s accented voice offers more and more questions about those arrows and the tectonic plate movements they represent. How do we know about the plate movements? What is the origin of measurements? Is it from GPS or magnetic anomalies? Then geologist John Creasy takes over, asking Runnals if he’s thought about how his theories would apply to faults and fissures on the ocean floor.

Reflecting on the experience a few months later, Runnals says it was all good.

“When you’re writing a yearlong thesis, it’s hard to think about every single aspect of your project in depth,” he explains. “So it’s good to know what the experts find important that you didn’t give much thought to.”

It was all good for a couple other reasons.

After leaving the room so the panel could vote (“Honors” or “No Honors”), Runnals and his adviser, Dyk Eusden ’80, return to learn that he’s been granted honors, as did all candidates in 2011.

Runnals then asks his own question of Einarsson. “Is there enough material here to maybe produce a paper?” Yes, replies Einarsson. “This can be made into quite a substantial paper.” The answer brings the first smile from Runnals of the session, plus a quiet “Wow.”

Runnals’ second question asks if Einarsson is willing to work with him on the paper. Again, the geophysicist says yes. And that’s where Runnals is right now, in Iceland, working with Einarsson on the manuscript.

And a scholar is born. 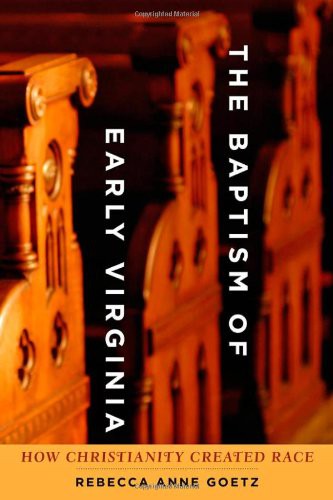