Arts Crawl, Asia Night to light up the campus on Jan. 27 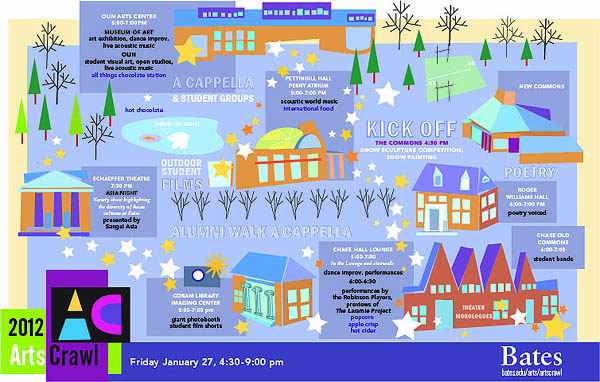 The event is open to the public at no cost.

Revealing the breadth and excellence of the visual, literary and performing arts at Bates, the Arts Crawl begins with outdoor activities across campus at 4:30 p.m. For more information, please call 207-786-6417.

See a full-screen view of the Arts Crawl map.

Asia Night, reflecting the diversity of Asian cultures, ends the Crawl at 7:30 p.m. in Schaeffer Theatre, 305 College St. On the program are pop dances including Bollywood numbers, performance art and gamelan music. 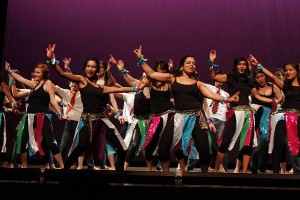 Produced by the Bates Arts Collaborative, a group of faculty, staff and students working to raise the profile of the arts on campus and in the community, the Arts Crawl features more than 100 students sharing their creative voices through film, dance, music, spoken word and theater.

The Bates College Museum of Art, at 75 Russell St., stays open past its usual 5 p.m. closing time for the occasion. Showing are Xiaoze Xie: Amplified Moments (1993–2008), a major survey of work by an important Chinese American artist known for his explorations of time, memory, history and the media; and James Ensor: Scènes de la vie du Christ and other works, featuring lithographs and etchings inspired by late-medieval combinations of religious and carnival imagery.

Arts Crawl events will take place simultaneously across campus. The outdoor events include a cappella singing, as well as snow painting and ice sculpture contests open to public participation. 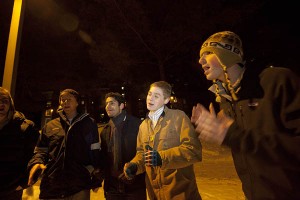 The Deansmen perform during the 2011 Arts Crawl at Bates.

Sweet and savory treats such as popcorn, hot chocolate and hot apple crisp will be served around campus, including “all things chocolate” station in Olin Arts Center, 75 Campus Ave., and international foods in Perry Atrium.