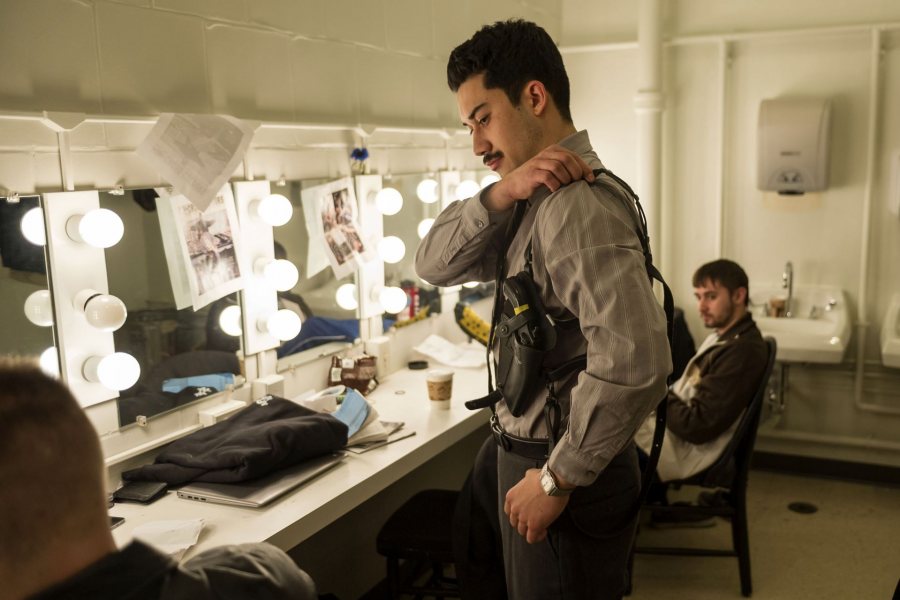 Backstage in Gannett Theater brimmed with intensity on Wednesday night for the dress rehearsal of The Pillowman, directed by Samuel Wheeler ’17 of Skowhegan, Maine.

For Wheeler, directing the play, which has performances through Monday, is part of his senior thesis, and his actors knew the pressure was on.

“Since it is Sam’s thesis, the high stakes have made us all put in our best,” says Nate Stephenson ’18 of Ellsworth, Maine.

Wheeler, a theater and sociology major who spent last semester in Dublin studying contemporary Irish drama, was enamored with the level of storytelling in The Pillowman and the crafting of the script. “I fell in love with the words,” he says.

His thesis process involves lots of writing, and “my hours just directing rehearsals go from 4 to 7 most afternoons,” Wheeler says.

Stephenson portrays the play’s central figure, Katurian, a writer whose violent short stories have a disturbing similarity to real crimes committed in his town.

“While the script itself is dark and gruesome in nature, dealing with violence and torture, the play is actually quite hilarious at times,” says Wheeler, who could be heard chuckling during the rehearsal.

Technical Director Justin Moriarty has been inspired watching Wheeler’s process and being able to help along the way. “His level of dedication to the craft, commitment to his vision, and thoughtful intention highlight what a Bates education has to offer,” said Moriarty.