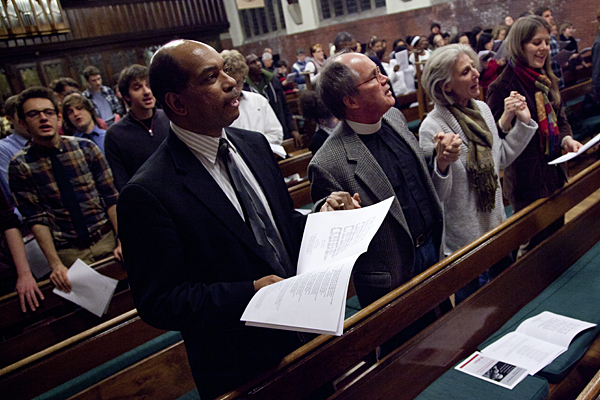 Before reading the Call to Worship at Bates’ annual Martin Luther King Jr. Memorial Worship Service on Jan. 15, Dean of Students James Reese shared his memories of King’s speech during the March on Washington, Aug. 28, 1963.

“My father was there,” said Reese.  “I was watching TV trying to find my dad in the crowd.”

Reese then asked the Chapel congregation to “stand close to one another like they did that day.”

This year’s King service was marked by stories like Reese’s, reminders that for some members of the Bates community, the March on Washington and King’s assassination remain vivid. On this bitterly cold January night, students, faculty, staff and neighbors gathered to share these memories and celebrate King’s life and dream with music, dance and a pledge of commitment to civil justice.

In his homily, keynote speaker Julian Agyeman shared his memories of watching King on television from his home in East Yorkshire, England. 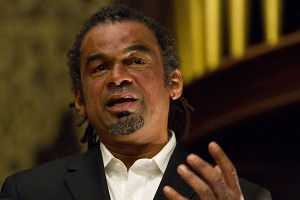 “TV opened a whole world for me,” Ageyman said of watching footage of the American civil rights movement.  “A world that was literally in black and white.”

He continued by asserting that King’s dream transcends issues of race.  A member of the Tufts University faculty and an advocate for environmental justice and sustainability, Agyeman asked the community to think about the creative and intellectual resources lost when young people are unable to realize their potential. He suggested that if a cure for cancer may be hidden in a patch of rainforest that will be destroyed, it could also be in the mind of a boy or girl who is unable to afford an education. 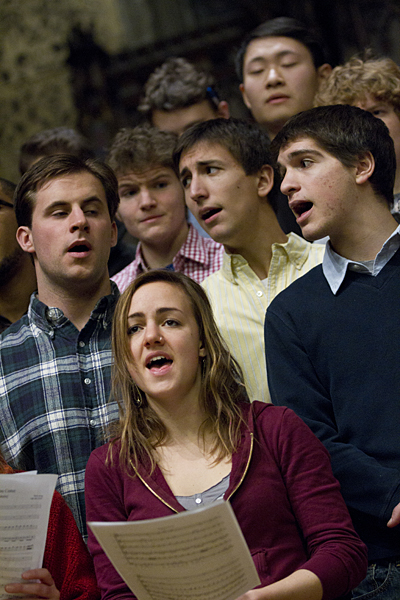 The evening also featured poignant musical offerings by the Gospelaires, the Deansmen and a combined a cappella choir. The Gospelaires, led by Stephen Saxon, include Bates alumni and members of the Lewiston community along with current students.

“I Just Can’t Give up Now” featured a solo by 2011 Bates graduate Megan Guynes. Dance major Victoria Lowe ’12 accompanied the Gospelaires with original choreography for “I Wanna Be Ready.”

This year’s offering was donated to Lots to Gardens, an organization, founded by a Bates alumna, that uses sustainable urban agriculture to provide healthy and fresh food, and civic empowerment, to the youth of Lewiston and Auburn.