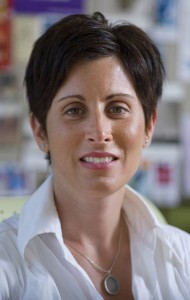 Lisa Genova ’92 is the author of “Still Alice” and “Left Neglected.”

Genova, who has a doctorate in neuroscience from Harvard, is recognized for creating compelling fiction about characters afflicted with cognitive disorders. Her talk is presented by the College Key Distinguished Alumni in Residence program, which brings Bates graduates prominent in their fields to campus to visit classes and meet with students and faculty, in addition to the public lecture.

“Genova is a master of getting into the heads of her characters, relating from the inside out what it’s like to suffer from a debilitating disease,” wrote a USA Today reviewer in 2011. “How she does it we don’t know, but she does, and brilliantly.”

Genova’s fiction-writing debut was Still Alice, the story of Alice Howland, a cognitive psychology professor at Harvard who is diagnosed with Alzheimer’s disease at age 50 and struggles with her loss of memory and independence. Genova self-published the novel in 2007, only to see it picked up a year later by Simon & Schuster, whose edition became a New York Times best-seller.

In 2009, the book was the No. 6 Book Group Favorite by Reading Group Choices, a Barnes & Noble Discover Pick, a Borders Book Club Pick and a Target Book Club pick. There are more than a million copies in print, and it has been translated into 25 languages.

In 2011, Genova published her second New York Times best-seller, the critically acclaimed Left Neglected (Gallery Books). Here the protagonist is Sarah Nickerson, an intensely multi-tasking mother, wife and executive at the top of her game who suddenly suffers a traumatic brain injury. As she wills herself to regain her independence, Sarah learns that her real destiny may in fact lie far from the world she has built for herself.

Genova, who lives with her family on Cape Cod, is at work on a third novel, Love Anthony, about a boy with autism. Inspired by her grandmother’s struggle with Alzheimer’s to write Still Alice, Genova has also become an advocate for sufferers of the disease, and travels the world to speak about it. She has appeared on the Diane Rehm Show, CNN, Fox News and Canada AM.

At Bates, Genova graduated with a self-designed major in biopsychology. She never took a writing class, but was a gifted writer who knew the importance of telling stories, especially when it came to science.

“All good scientists, the ones who help the field think in an entirely new way, are storytellers,” Genova told a Bates Magazine interviewer in 2009. (Read the article.)

The Distinguished Alumni in Residence program was established in 2003 by the College Key, a Bates organization that recognizes and supports extraordinary achievement among current and past Bates students.