‘Keep writing and don’t ever stop’: Takeaways from Elizabeth Strout’s visit to Bates

Olive Kitteridge, the cranky-but-lovable titular character in the novel that won Elizabeth Strout ’77 a Pulitzer Prize in 2009, is ”very much a part of the Maine landscape, in her particular Olive barnacle-like way,” she told Bates President Clayton Spencer.

Even so, the idea to write a sequel to Olive Kitteridge came to Strout in a cafe in Norway — and in that sequel, Olive, Again, Olive takes a trip to that country.

Reprising a similarly popular Q&A discussion held at Bates during Reunion 2017, Strout joined Spencer in front of a packed Olin Concert Hall to read from Olive, Again, which a Washington Post reviewer called “stunning work — arguably better than the original.” 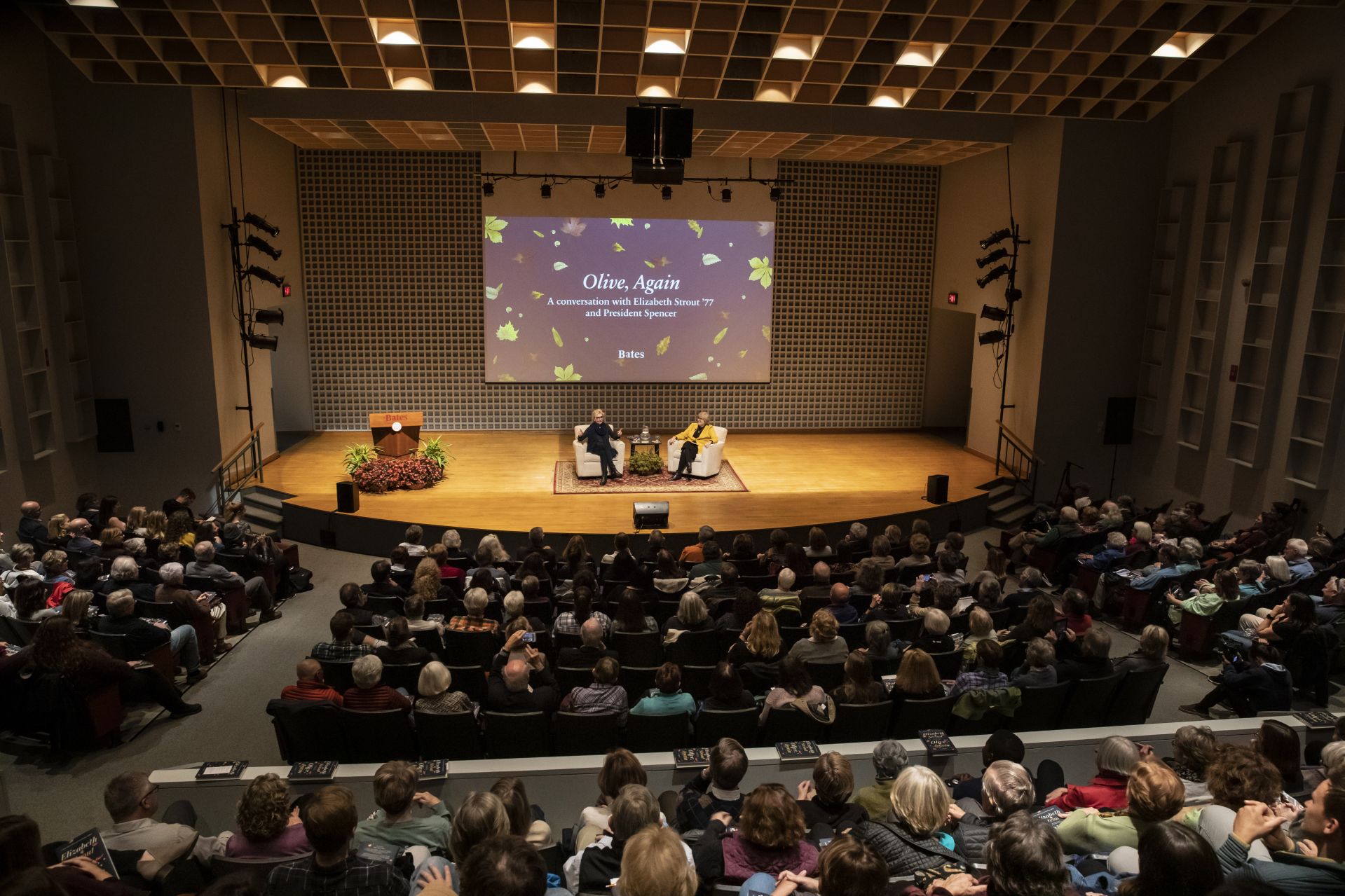 Like Olive, Strout herself is inseparable from Maine. In previous interviews, she’s described how a solitary childhood in small Maine and New Hampshire towns sparked her imagination. Much of her fiction takes place in Maine’s seaside villages, mill towns, or cities.

At Bates, professors like the late Jim Hepburn, professor emeritus of English, and Martin Andrucki, the Charles A. Dana Professor of Theater, encouraged her writing and introduced her to works that inspired her.

To-the-point and often evoking audience laughter, Strout went into detail about her writing process and offered some advice to aspiring writers. Here are eight takeaways from the conversation.

“I just make a mess,” Strout told Spencer, who had asked her if she had a writing routine. “I’ve learned at this point that I don’t write from beginning to end — because I can’t. It becomes too wooden. So I’ve learned to write by scenes.”

“If I can make a scene that is real, then I leave it on the table. If I don’t, it gets tossed on the floor. That continues until eventually the scenes that have what I consider a heartbeat will start to connect.

“That’s why I never worry about plot, because it will take care of itself.”

Strout’s two favorite classes at Bates were a criminology course with sociology professor Sawyer Sylvester, and a theater class with Andrucki, who guided his students through the work of classic American playwrights like Eugene O’Neill and Tennessee Williams. 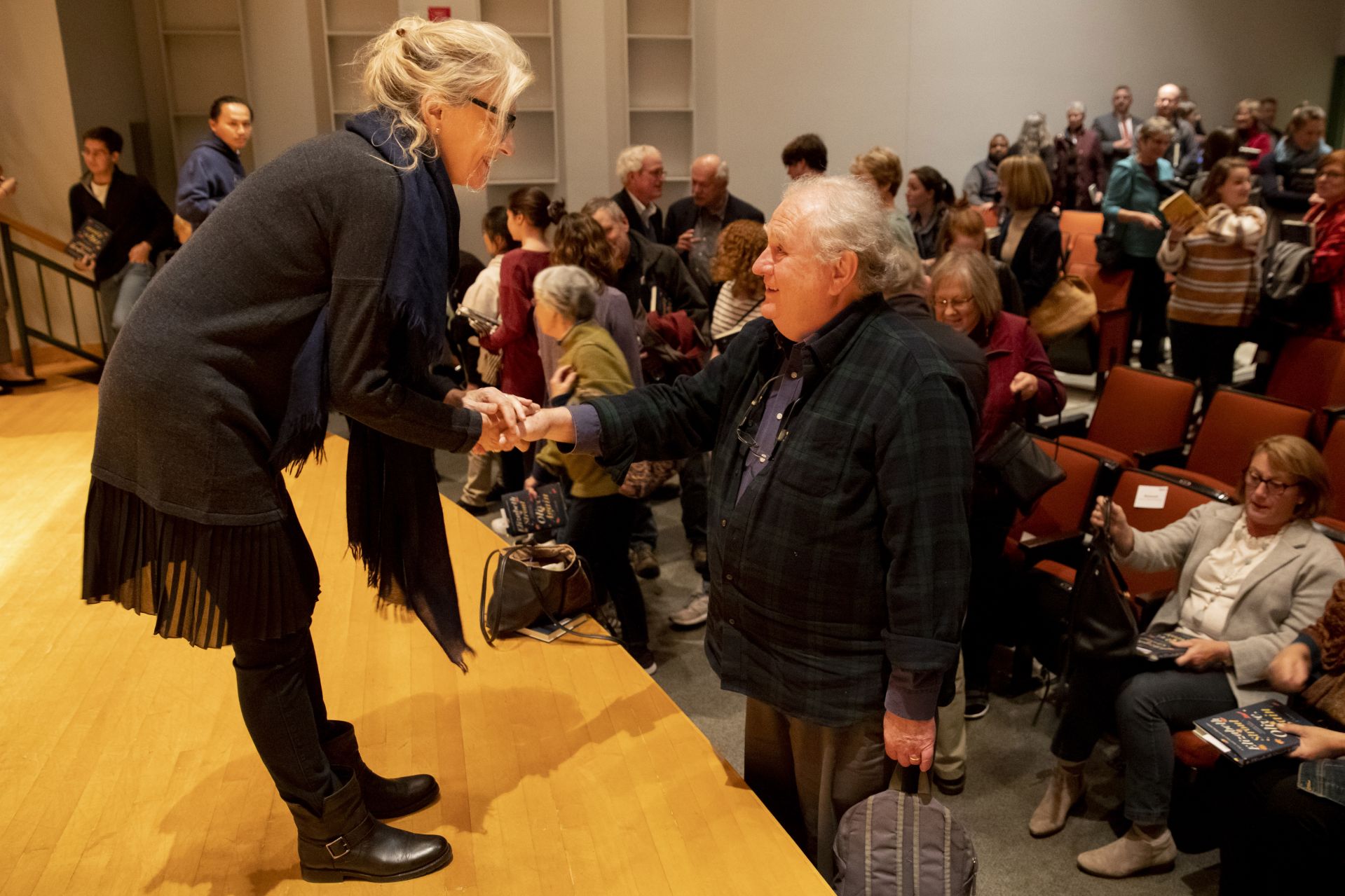 “He loved those people so much that I loved them,” Strout said.

And she learned a valuable lesson from their plays. “Reading dialogue was very helpful,” she said.

“My entire life, I have always wondered what it felt like to be another person,” Strout said. 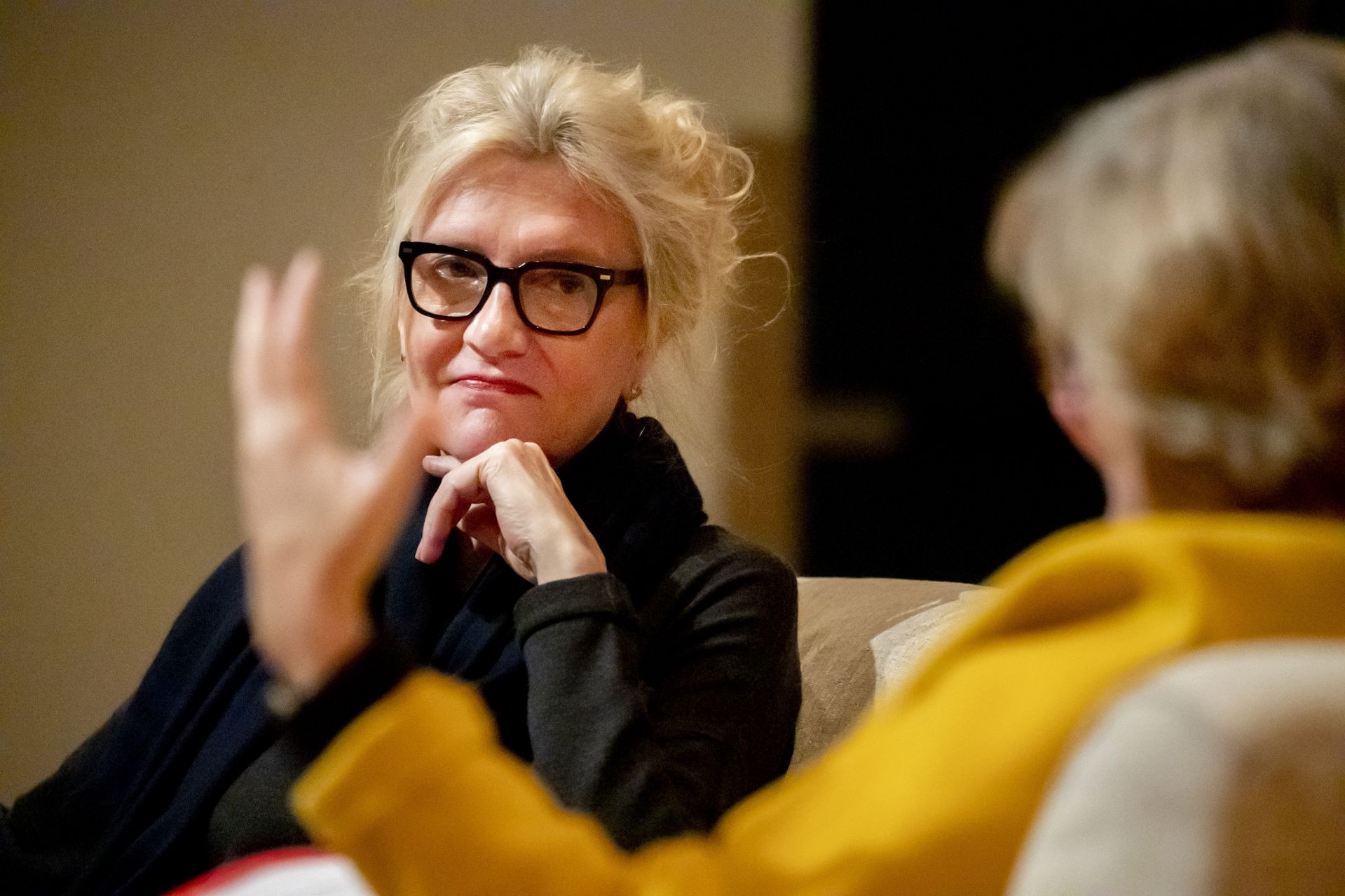 “I have always wondered what it felt like to be another person,” Strout said during her appearance at Bates. “That is the engine that has propelled me forward in my life.” (Phyllis Graber Jensen/Bates College)

“That is the engine that has propelled me forward in my life. I have listened unbelievably carefully. I have observed all the time, I’m listening and I’m watching and I’m thinking. Even on the subway, I watch somebody and I think, ‘Physically what does that sweater feel like?’ It’s so automatic with me.

“When I was young and reading fiction for the first time, I read something — I don’t remember what it was — but I thought, ‘I’ve had that thought.’ I recognized myself in the character that I was reading. I understood through fiction that we get a chance to understand what it’s like to be another person. That’s what I’m trying to do.”

An audience member, picking up on how Olive Kitteridge came back to Strout in Norway, asked if that’s how she comes up with all of her characters.

Yes and no, Strout said. “Even within a story, the characters will differ in how they show up. Pete Barton showed up ever so gently, because he’s such a gentle person. He just hung out quietly next to me for a long time and I realized — ‘Oh, okay, Pete, let’s wash the windows.’ Olive, because she’s so Olive, showed up with a force. It’s because that’s who she is.”

A Bates student asked Strout how she persisted in her writing, when many young writers struggle to wrangle themselves into a routine.

“You just have to fail,” Strout told him. “Believe me, I know that because I failed for years and years and years. I couldn’t believe how long I kept failing. I really was a little bit intrigued by it. But I kept going.” 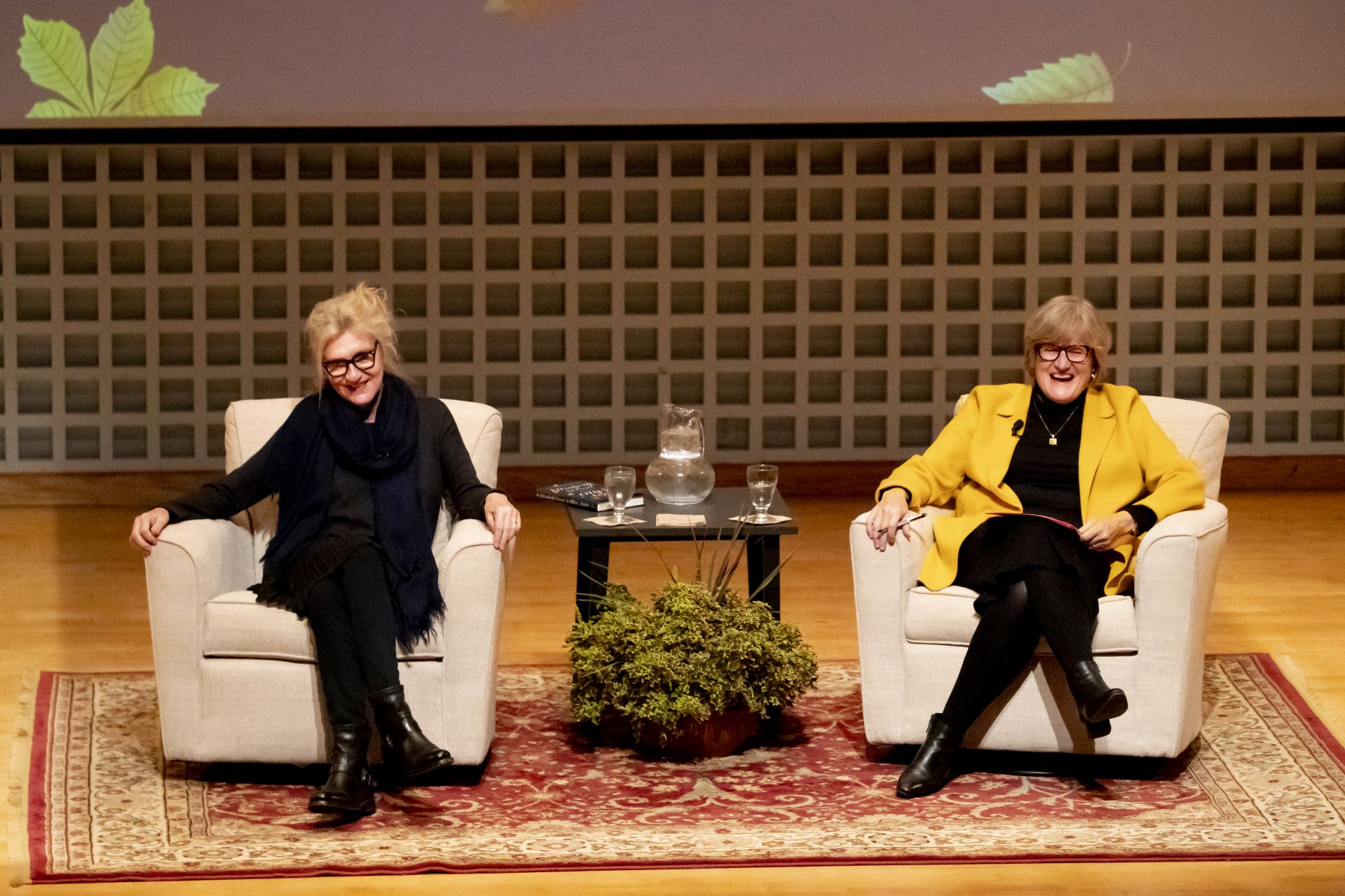 But Strout described her own writing process as an abiding need, not something she has to force herself to do.

“It’s funny,” she said. “This woman came over one time when I had first moved to New York. She saw the typewriter on the dining room table and the messy handwriting, and she said, ‘I really admire your discipline.’ It didn’t feel like I was disciplined. It just felt like I needed to do it. There’s a difference.

“I think of discipline as someone saying, ‘Okay, I am going to exercise five days a week no matter what.’ I don’t have that discipline, you see. Writing is, I just had to do it. I had to do it. So I kept doing it.”

Let sentences rise to meet you

“I don’t want to get you in trouble,” Strout told Mark Su ’22, of Beijing. Su, an English major accustomed to close, analytical reading of text, had asked her how best to read a book.

“Well,” Strout corrected herself, “I won’t get you in trouble — but I don’t want to get your professors in trouble. I think the best way to read something is to just read it.

“As a child, I would wander through the library. I had no idea who these different writers were, but I would pull a book from the shelf, and once in a while it was almost like the text of the page would rise up to me. 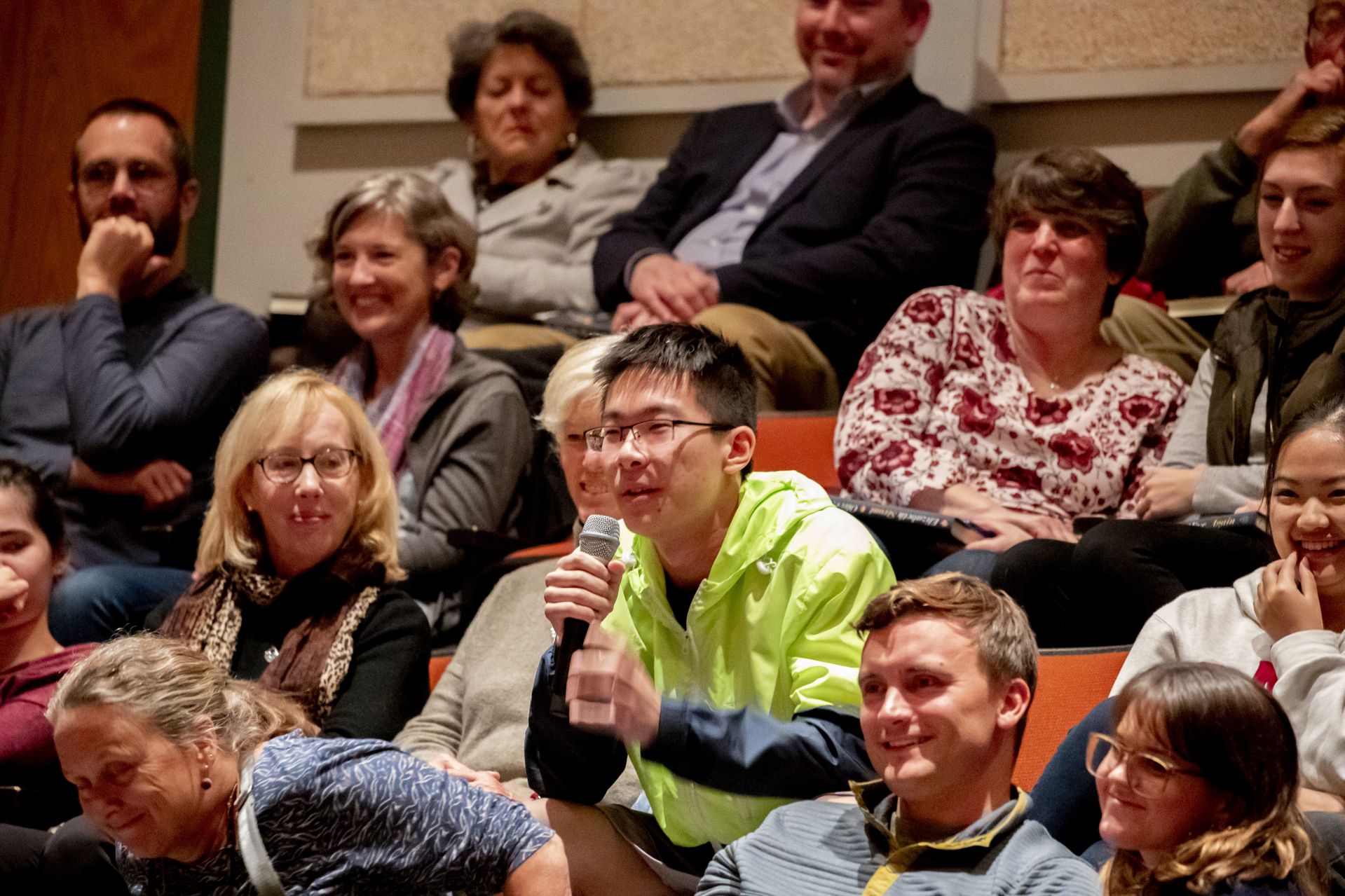 During the Q&A portion of the evening, Mark Su ’22 of Beijing asks Strout the best way to read a book. (Phyllis Graber Jensen/Bates College)

“Years later, I would realize that’s Norman Mailer. It was interesting, that sense that sometimes these sentences would rise to meet me, and I’ve never forgotten that.

“I think that when you read something, allow yourself to think, ‘What am I feeling? What’s the experience that I’m having? Are these sentences rising to meet me, or not?’

“If they’re not and you’ve got to write a paper about it, good luck.”

Let books teach you about others

Su also asked Strout about the characteristics of a good book.

What advice would you have for young writers? asked an admiring audience member, who happened to be Strout’s friend Janet Mills, the governor of Maine. 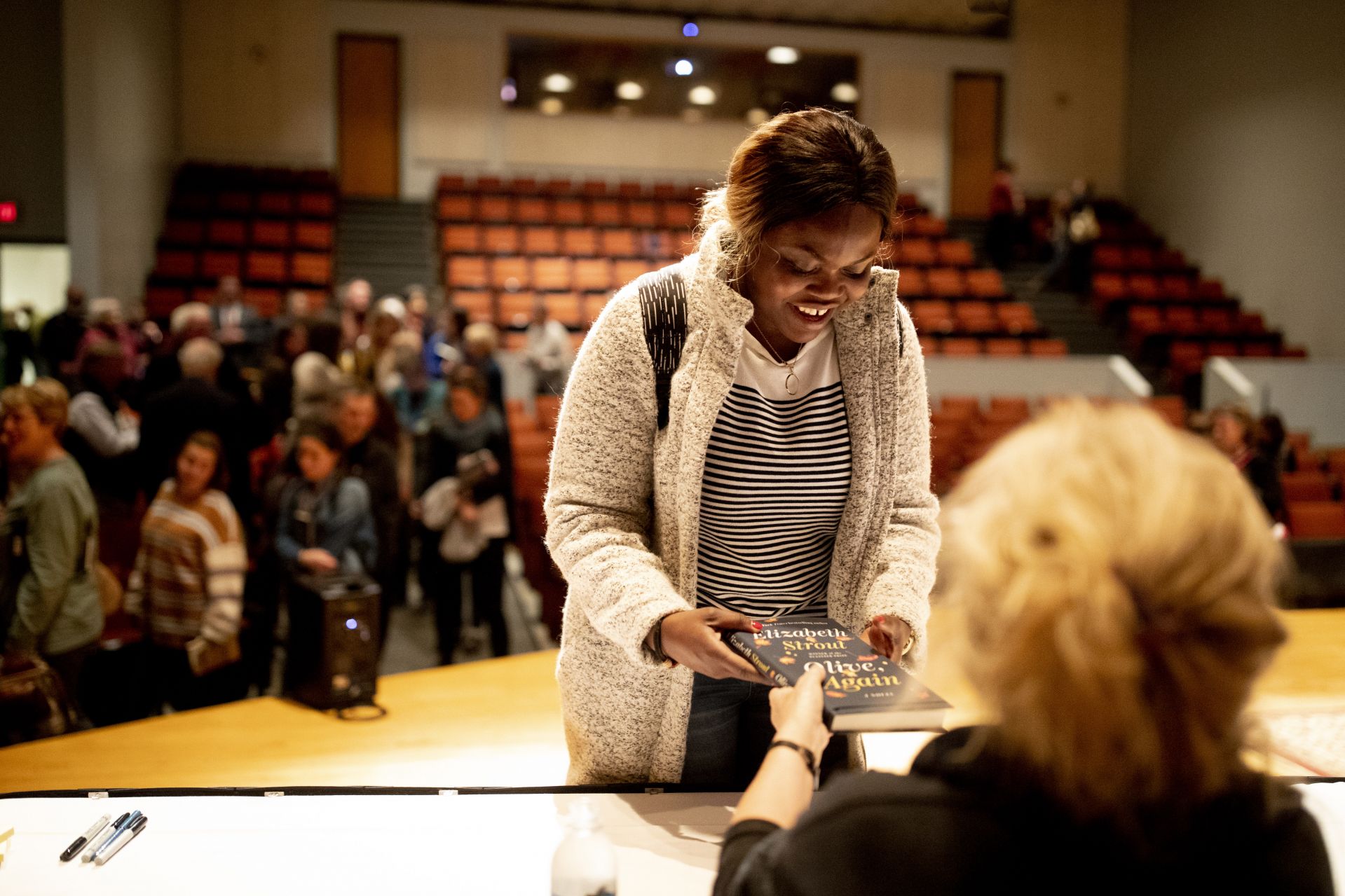 Strout didn’t skip a beat. “If you really want to be a writer, then you just do it,” she said, “and you just keep doing it and you never ever stop doing it.