It wasn’t quite as easy as thumping your Bean Boot heels together and repeating, “I want to get the hell out of this miserable slop.”

Still, escape from the cold and rain-soaked evening of Jan. 27 was possible: There really were a few hours when you could have found yourself saying, “Toto, I’ve a feeling we’re not in Maine anymore.”

The escape came courtesy of the second-annual Bates Arts Crawl, a showcase of student creativity that culminated in the variety show called Asia Night — a kaleidoscope of dance, song and laughs that made the Maine winter seem far away indeed.

For four and a half hours, the campus was a constellation of creativity from south to north, as students danced, sang, acted, showed films and paintings and sculpture. And the ever-popular Asia Night filled Schaeffer Theatre for the first night of its two-night stand.

Especially well-attended were dramatic excerpts from the upcoming Robinson Players production of The Laramie Project and student-created dance works, all in Chase Hall — with “Amber Wears Polos,” a dynamic dance-and-poetry piece by Katie Ailes ’14, a highlight. 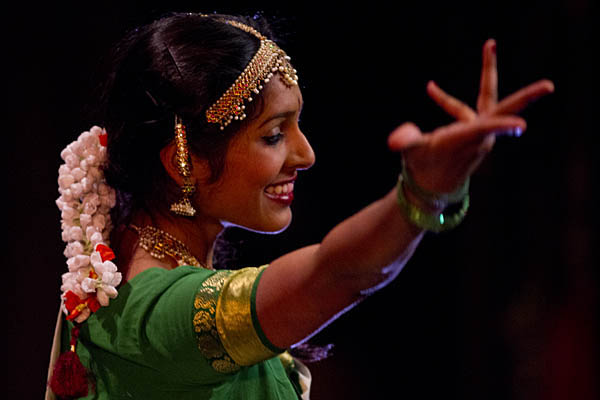 “I was incredibly pleased with the success of this year’s Crawl,” said Emma Timbers ’14, a member of the Bates Arts Collaborative, which produces the event. “It reflects the vibrancy of the arts at Bates that there were so many events going on.”

“I was happy to see people braving the dreary night to support friends and classmates,” Timbers said.

Kicking off the Crawl, if you will, were community art works presented, to the thump of drums, in front of New Commons. Helicase Biology Club members Conor Smith ’14 and Daniel Jordan ’14 won the snow sculpture contest with their beached sperm whale. “The beached whale triumphs, as it always does,” Kit Sheridan ’12 announced through a bullhorn.

It was a victory by default, as their anticipated rivals (and last year’s winners) from the chemistry department failed to show, but that took away nothing from the excellence of the whale. Also part of the opening ceremony was the creation, in the snow with spray bottles of dye, of a Sol LeWitt “automatic drawing,” under the direction of philosophy professor William Seeley.

Sheridan turned up again in the Olin Arts Center, where her complex abstract paintings hung on the wall of the studio she shares with other studio art majors. Her visitors included Bates president-elect Clayton Spencer, who, Sheridan recounted, wanted to know why she had chosen Bates.

“I went to an all-girl school for 10 years and I wanted to change things up,” Sheridan joked, but added, more seriously, that she appreciated the literal and figurative creative space provided to students in the arts — such as the program for studio art majors. “It’s nice to have a full year to work toward the Senior Exhibition,” she said.

In the Olin lobby, visitors hovered around a nothing-but-chocolate-and-plenty-of-it table while, at the foot of a staircase, the Crosstones belted out the Eurythmics’ “Sweet Dreams Are Made of This.” (Talk about art imitating life.) Student artworks on display included an intriguing diorama composed of stuffed animals, colored lights and mirrors in a low box.

In Coram Library, the Imaging Center featured student-made short films, a row of iPads programmed to give passers-by the effect of funhouse mirrors, and an image of Andy Warhol’s Brillo Soap Pads Box whose perspective changed as viewers moved from side to side. 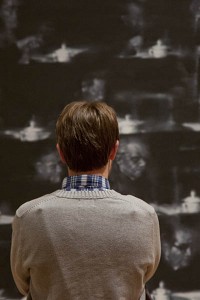 During the second annual Bates Arts Crawl, a student examines a piece by Xioaze Xie in the Museum of Art.

Spoken-word and poetry performances took place in the newly renovated Roger Williams Hall, while Perry Atrium afforded a more reflective mood with an assortment of acoustic music, from the ukulele-powered original songs of Grace Glasson to the hypnotic Gamelan Orchestra.

Concluding this escape from the cold and rain was a warm and lively destination: Asia Night, sponsored by the student organization Sangai Asia. In contrast to the day that preceded it, a day of gray skies and cautious shuffling over wet ice, this show was nothing but dazzling colors, silly humor and captivating motion.

In fact, dance drove Asia Night, and driving much of the dance were two seniors who, making their final Asia Night appearances this time around, have played decisive roles in Bates dance: Shachi Phene, a woman of Indian descent from Lexington, Mass., and Shlesma Chhetri of Kathmandu, Nepal.

In a more purely classical Indian vein, Ramya Ghantasala ’15 delivered the dance “Thillana” with enough expertise, not to mention sheer charm, to inspire optimism about the future of South Asian dance at Bates post-Phene and Chhetri. Japan and Vietnam were also represented by traditional dances.

Music included a song by the Bates Gamelan Orchestra, in its third performance of the evening, and a piece — something in between music and dance — by a group of drummers in Japan’s thundering taiko tradition.

Two men sang songs that gave pensive counterpoint to the lively dances. Hieu Nguyen ’13 of Hanoi, Vietnam, brought a powerful vocal talent to “Nostalgia,” a folk-influenced expression of longing for a bygone rural life. And, even as political repression in Myanmar seems to be easing, Swe Htet Naing ’12 of Mandalay sang a moving ballad commemorating the victims of 50 years of repression in the former Burma.

Reading their lines from iPads, Ilyas and her co-host Umur Khan ’13 of Rawalpindi, Pakistan, had Hollywood award-show banter down cold, whether in introducing the next act or the students who modeled Asian apparel in between performances. (Umur: “Amna, you’re so gorgeous, intelligent, sexy — you’re getting more and more like me everyday.”) 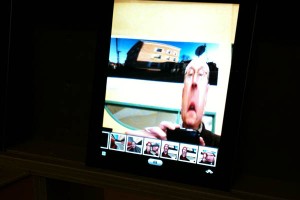 An iPad in the Imaging Center reveals the true face of a visitor’s soul during the 2012 Arts Crawl.

And the grand finale, a mind-bending collision of umpteen dance and musical styles carried off by more than 40 students, was framed as a reality-talent TV show, with different groups of dancers competing for world domination.

But while the talent-show conceit got lost in the commotion, it didn’t even matter: In dance styles from Bollywood to Latin to hip hop to Broadway, with bright shiny costumes to match, the finale was a Schaeffer-shaking celebration not just of Asian culture or of Bates, but of the sheer ecstatic power of music and dance.

— with additional reporting by Jay Burns