The Portland Press Herald’s Ray Routhier offers a Q&A interview with Eben Miller ’96, whose book Born Along the Color Line: The 1933 Amenia Conference and the Rise of a National Civil Rights Movement (Oxford University Press, 2012), looks at the U.S. civil rights movement before World War II. 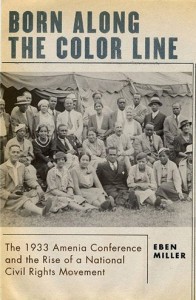 Eben Miller '96 is the author of "Born Along the Color Line: The 1933 Amenia Conference and the Rise of a National Civil Rights Movement" (Oxford University Press, 2012).

A Bates honors history major whose thesis explored African American protest history in Maine, Miller tells Routhier that the idea for the book was sparked by seeing a photo of attendees at an NAACP conference at Amenia, N.Y., when the organization was at a crossroads.

By the 1930s, the NAACP was in “dire straits,” Miller explains. “It was during the Great Depression, and funding was drying up. Local branches were fizzling out, and the early guard of founders were aging, passing away.

“There was a sense that the NAACP’s traditional outlook of using litigation and legislation wasn’t capturing young people’s attention.”

Still, that early focus on litigation created a “structure later advocates would build on,” Miller says. The founding generation “also was concerned about a lesser-known theme at the time that [Martin Luther King Jr.] would pick up on later, that of economic equality.”

“It is hard to imagine writing this book without his influence.”

In the book’s acknowledgements, he thanks his adviser, Bates history professor Hilmar Jensen, noting that Jensen’s Bates seminar “Prelude to the Civil Rights Movement” inspired Miller to explore this era.

“It is hard to imagine writing this book without his influence,” Miller writes.