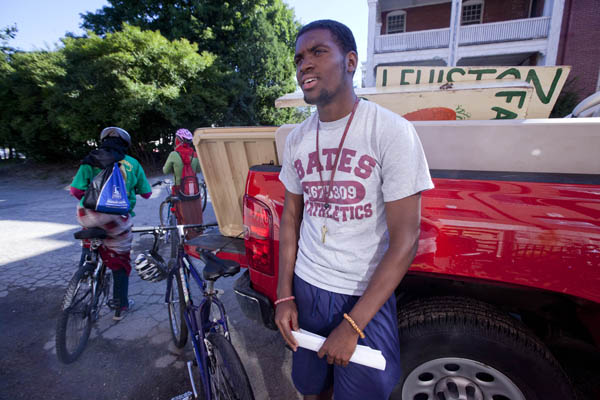 David Longdon ’14, a Bates economics major from Accra, Ghana, spent summer 2011 as a leadership intern with Lots to Gardens, a youth-focused organization in Lewiston. Photograph by Phyllis Graber Jensen/Bates College.

For the sixth year in a row, Bates College has received prominent federal recognition for the quality of its engagement with the community.

Bates has been named to the President’s Higher Education Community Service Honor Roll with Distinction, one of a range of honors that the Corporation for National and Community Service bestows on colleges and universities whose civic engagement, service-learning and volunteerism lead to exemplary levels of meaningful outcomes.

The 2012 Honor Roll recipients were announced on March 12 at the American Council on Education’s 94th annual meeting, in Los Angeles.

The honor recognizes Bates’ commitment to significant collaborative engagement in greater Lewiston-Auburn. First named to the honor roll in its inaugural year, 2006, Bates was one of 110 colleges named to the 2012 Distinction list. Criteria for the honor include the scope and innovation of community-based projects, levels of student participation, incentives for involvement and the extent to which the school offers academic service-learning courses.

The Harward Center for Community Partnerships is Bates’ hub of college-community initiatives. The center partners with more than 125 community organizations and facilitates the volunteer involvement of two-thirds of Bates students, and the academic involvement of one-third.

In the past year, through courses, theses and independent studies, 963 Bates students and 45 faculty members gave more than 41,478 documented hours of academically-based community work. Students provided more than 11,923 documented hours of volunteer service during the academic year, of which some 1,044 hours involved mentoring in local schools.

Administering the award is the Corporation for National and Community Service, a federal agency that leads President Obamaís national call-to-service initiative, United We Serve, and engages more than 5 million Americans in service through its Senior Corps, AmeriCorps and Learn and Serve America programs.

The corporation oversees the honor roll in collaboration with the federal Education and Housing and Urban Development departments, as well as the Campus Compact and the American Council on Education.