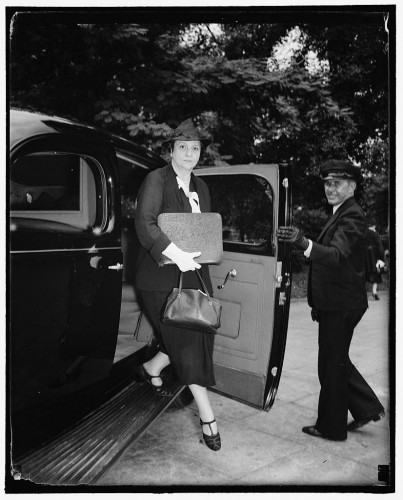 U.S. Secretary of Labor Frances Perkins arrives at the White House for a Cabinet meeting in September 1938. Photograph by Harris & Ewing/Library of Congress Prints and Photographs Division.

This lecture is the autumn’s fifth Civic Forum Series event, presented by the Harward Center for Community Partnerships, the Bates office responsible for the college’s community-based learning, environmental stewardship and volunteer programs. The talk is open to the public at no cost. For more information, call 207-786-8283.

Perkins, the nation’s first secretary of labor and the first female Cabinet member, is credited as the architect of much of President Franklin Roosevelt’s most significant New Deal legislation. She proposed and helped implement major reforms dealing with labor and working conditions that we take for granted today, such as child labor laws and workplace safety laws. She is also the “mother” of Social Security.

Perkins was the daughter of Maine-born parents, and the family residence, the so-called Brick House on the Damariscotta River in Newcastle, was her beloved vacation retreat. Today the house is the site of the Frances Perkins Center, dedicated to the history of Perkins’ career and the New Deal era, to carrying on her work and to interpreting her vision for a healthy and productive workforce.

Fortman served as Maine labor commissioner in the Baldacci administration from 2003-2010, administering the very laws and regulations protecting Maine workers that Perkins set in place. Fortman, who became the Perkins Center’s second director in October 2011, will focus her Bates talk on Perkins’ enduring legacy and its relevance to the United States today and to this November’s election.