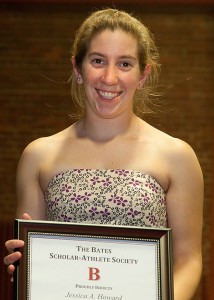 Biochemistry major Jessica Howard ’12 was also a three-year letterwinner on the women’s swim team who was inducted into the Bates Scholar-Athlete Society as a senior. Photograph by Rene Minnis.

The journal Chemistry and Engineering News says Jessica Howard ’12 is a prime example of how science majors can use research internships to leverage job prospects.

A chemistry major, Howard is now a research scientist working on a drug discovery project at Albany Molecular Research Inc. in Indianapolis. She had considered graduate school, but “loves the hands-on” aspect of work in the private sector.

Her internship, the summer before senior year, was at Cubist Pharmaceuticals (whose CEO is Mike Bonney ’80, chair of the Bates College Board of Trustees).

“I loved my experience there — the people, the work environment, and seeing the impact of my work by producing drug candidates,” Howard tells reporter Emily Bones.

Howard also gained lab experience at Bates, including a yearlong thesis in analytical chemistry under Dana Professor of Chemistry Tom Wenzel. “Being able to form a relationship with a professor who knew me both in the lab and as a student, that gave me a leg up in my [job] interviews,” Howard says.

She also did a CDIP job shadow through the Bates Career Development Center with the drug-discovery company Ischemix, where she was hosted by Steven Kates ’83, vice president of research.

(In fact, the National Science Foundation says that 72 percent of chemistry majors have had some research experience upon graduation, suggesting that graduate schools and employers now expect science grads to have such research experience.)

The private-sector experience at Cubist and Ischemix, coupled with her Bates education, made her a more attractive job candidate, she explains.

“I could start working right off the bat, rather than being trained.”

Picture story: The Bates Class of 2026 joins their new community

Video: Experience the first week for the Class of 2026 in two minutes