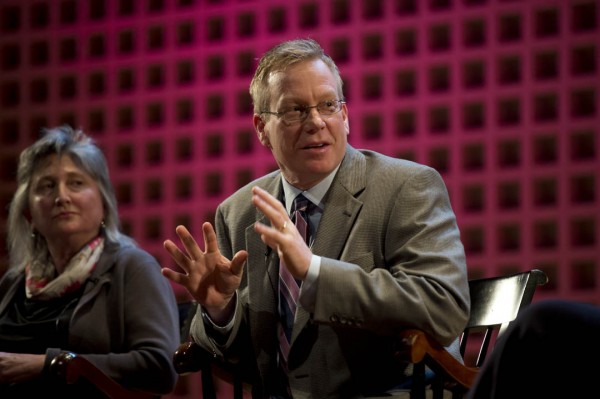 He explained the difference by contrasting two marketing strategies, one employed by a company he worked for 20 years ago and the other by the firm he now leads, Cubist Pharmaceuticals. In marketing a new drug, the first company attacked its drugmaking competition, focusing on the competitor’s weaknesses.

But Cubist, he said, goes after a different foe: human pain and suffering. Alleviating what ails us “is a much more enduring framework for defining success,” said Bonney, and one that’s much more motivating to Cubist employees.

An example of a “good fight” in the sense that World War II was a good war, Bonney’s story was a high point for many listeners during a panel discussion of the roles of competition and collaboration. That morning panel in the Olin Arts Center Concert Hall was one of two, jointly presented as The Engaged Liberal Arts: The World of Ideas | Ideas in the World, designed to provide a conceptual complement to this afternoon’s inauguration of Bates’ eighth president, A. Clayton Spencer.

Bonney took part in the Ideas in the World segment, moderated by Harward Center Director Darby Ray. The other panelists were Andrew Byrnes ’05, Olympic gold and silver medalist with the Canadian men’s eight rowing team; and Francesco Duina, professor of sociology at Bates and author of the provocative study Winning: Reflections on an American Obsession.

That panel was preceded by the discussion The World of Ideas, moderated by Valerie Smith ’75, author, professor and dean of the college at Princeton. The panelists were Lillian Nayder, chair of the Bates English department and author of a pioneering biography of Charles Dickens’ wife, Catherine Hogarth; William Carlezon ’86, Harvard professor of psychiatry and director of McLean Hospital’s Behavioral Genetics Laboratory; and President Spencer’s former boss, historian and Harvard president Drew Gilpin Faust.

If the themes for the two panels are complementary, the discussions themselves played out in distinctive ways. Smith would ask a specific question of each of her panelists in turn: What led you to the scholarly life? Where do your ideas come from? How does contemplation figure in your intellectual work?

That last question prompted one of the panel’s most interesting responses, shared by Faust and Nayder. Faust — whose Civil War history This Republic of Suffering was adapted for a recently aired public television series — revealed that she writes original drafts in longhand. “Writing is a way of learning and a haven of contemplation” for her, as the action of moving a pen over paper “sparks the process” of intellectual discovery.

Ideas in the World took a slightly different form and mood, as Ray began by asking Duina to lay our the premise of Winning — a book that argues that the American emphasis on winning and competition, as opposed to what the real stakes of the competition may be, may be inimical to real happiness.

His explanation kicked a lively, often laugh-filled volley of ideas and counter-ideas that ultimately concluded with the proposition that collaboration and competition aren’t mutually antagonistic nor even opposite. As Byrnes suggested, as he described how rowers compete when they train, then collaborate when they perform together in the greater competition, those two processes are just two related ways of reaching a goal.