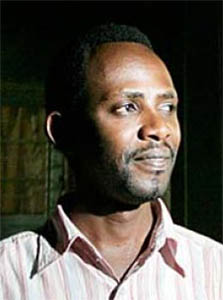 The event is open to the public at no cost. For more information, please contact adaugero@bates.edu.

The Rwandan Night is the sequel to Ndahayo’s autobiographical piece about the murder of his family, 2012’s Rwanda: Beyond The Deadly Pit, and is the second film in a planned trilogy about the tragic events of 1994.

This 70-minute ethnographic documentary explores the world of the oldest survivor of the genocide against the Tutsis in Rwanda. One night in 2006, the 51-year-old Sakindi bears witness to the genocide. Instead of living alone with the sorrow of losing his parents and other family members, he decides to speak for the first time before a large audience during a commemoration at Mumena Stadium in the capital city of Rwanda.

Ndahayo lost his parents and 52 other family members in the genocide. Today he is a candidate for a master’s degree in fine arts at Columbia University. His films as writer and director include the award-winning Scars of My Days (2007) and Behind This Convent (2008).