As President Clayton Spencer kicked off Mount David Summit in Pettengill Hall’s poster-filled Perry Atrium, she described the day of student presentations as an “academic Olympics.”

Flash forward to later in the afternoon, when ancient languages filled a Pettengill classroom for a session featuring works by Greek and Latin students of Laurie O’Higgins, the college’s Euterpe B. Dukakis Professor of Classical and Medieval Studies, including a student video that transported the audience to ancient Thebes. 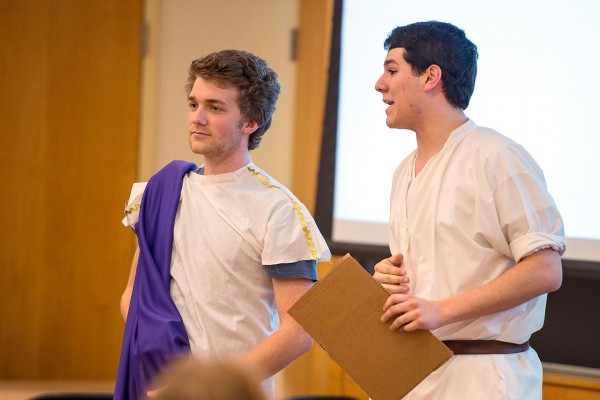 First up were Latin poetry students, with Michael Creedon ’15 of Medfield, Mass., giving an English introduction of the prologue to Plautus’ comedy Captivi.

Plautus was a Jon Stewart of his day.

Creedon explained how one could almost see the Roman playwright as a Jon Stewart of his day, offering ironic political commentary and incisive inquiry into familial love and loyalty among masters and slaves.

Creedon then joined fellow students to execute the prologue in costume, shackles and graceful Latin. Behind them, student-prepared subtitles appeared on a projection screen.

In one scene, the storm rages poetically outside an Olin Arts Center studio as Dionysus contemplates his options with Pentheus, the arrogant King of Thebes.

In the second scene, the Gomes Chapel offers a dramatic, ominous setting for an encounter between the disguised young god Dionysus and Pentheus, who ignorantly refuses to accept the whippersnapper and his mysterious Bacchic cult.

The English subtitles were prepared by Fleming and Spinosa, with assistance from O’Higgins.