Stonyfield chair to Bates Class of 2013: Push back 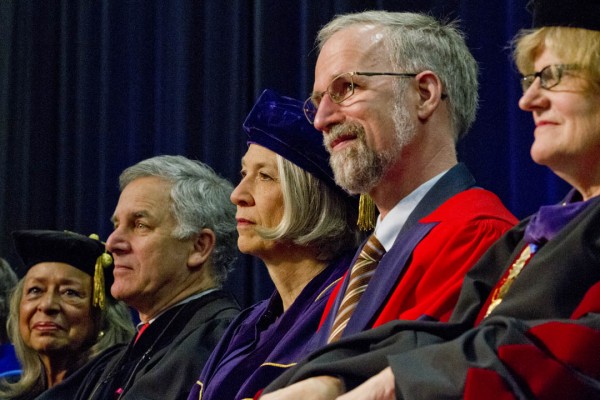 In business, the environment and government, “the bottom line is that many of the so-called experts have been wrong and now need to be second-guessed,” the co-founder and chairman of organic yogurt maker Stonyfield Farm told the Bates College Class of 2013.

“And that’s actually your job.”

Gary Hirshberg was the featured speaker at the May 26 ceremony, held in Merrill Gymnasium,  that started a new chapter in the lives of 436 Bates seniors. He also received an honorary degree, along with environmental historian William Cronon, Bates President Emerita Elaine Tuttle Hansen and Dr. Vivian Pinn, inaugural director of the Office of Research on Women’s Health at the National Institutes of Health. 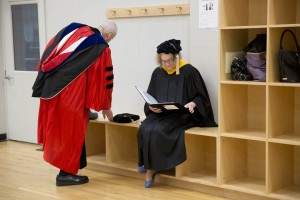 The event was a milestone for at least three people besides the graduates and their families. It was Clayton Spencer’s first graduation as sitting president of the college. But it was the final commencement for Pamela Baker ’69, vice president for academic affairs and dean of the faculty, and Multifaith Chaplain Bill Blaine-Wallace, both of whom are retiring from Bates.

The Sunday morning ceremony also presented a milestone in giving to the college. As reported to the gathering by Senior Gift chairs Nancy Weidner and Hank Geng, the Class of 2013 hit a new Bates record for participation in the senior class gift, as 400 seniors, or 92 percent of the class, donated nearly $18,000.

If the weather fell short of ideal, warm feelings abounded within Merrill. Spencer’s welcoming remarks spread the good feelings around, drawing warm applause with a request that the graduates show some love for the people who supported them in all ways through their Bates years — families and professors, for sure, but also members of the Lewiston-Auburn community, and the college staff “whose work on campus makes our lives possible, and whose work made this ceremony possible” (a reference to the need to move the ceremony indoors).

In still another milestone, a graduating senior spoke at Commencement for the first time in at least half a century. Tommy Holmberg, a history major and Bates actor-director from Winnetka, Ill., was selected by a Commencement committee from a field of three finalists nominated by classmates. 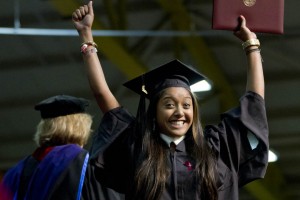 Holmberg offered a love letter to the college that celebrated, among other cherished aspects of the Bates experience, the passing of knowledge and lore from one class to the next, and from the college to the world. “You see, it’s a beautiful cycle we’ve got here,” he said. “The goodness of Bates is passed on out of admiration and gratitude for what was, and excitement and pride for what will be.”

After today, he said, “We will be intelligent, because of the ardor and devotion of the good people of this institution. We will be passionate, because Bates allowed us to follow our passions and realize our dreams. We will be fun, because we’ve had fun here.

“We will be loving, because the Bates community showed us so much love.”

Baker and Spencer presented the honorary degree recipients. Cronon, father of Jeremy Cronon ’13 and recipient of a Doctor of Letters degree, is an environmental historian whose “rigorous scholarship, imaginative arguments and elegant prose,” Baker said, “break new ground in our understanding of nature, wilderness and the American West.”

President of Bates from 2002 to 2011 and now executive director of the Johns Hopkins Center for Talented Youth, Hansen also received an honorary Doctor of Letters degree. As Bates president, she “helped us to dream well and take action on our good ideas,” Spencer said.

Another Bates parent, the father of Ethan Hirshberg ’13 was honored with a Doctor of Humane Letters degree. Gary Hirshberg’s achievement with Stonyfield, Baker said, is “considered one of the great stories in the realm of sustainable and organic agribusiness.” 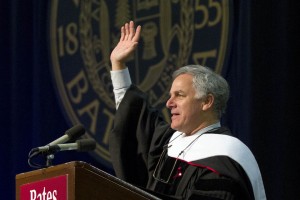 Recipient of a Doctor of Science degree, Pinn “has worked her entire life to open medicine’s portal to women and people of color,” said Baker, who quoted Pinn’s remark that, “I don’t think you’re truly a good doctor or a good researcher if you don’t reach back to help others coming along.”

Drawing lessons for the graduates from his experiences getting Stonyfield off the ground, Hirshberg’s address was funny, folksy and plainspoken. But if the tone was light (speaking of milestones, this may have been the first-ever mention of camel dung in a Bates Commencement address), the thrust of his message was anything but.

The world’s in trouble — social, medical, economic, environmental. “It is clear that we have brought the same short-sighted, greed-driven [sense of] entitlement that we’ve used to guide our economy,” he said, “to how we manage our planet and even our health.”

He said, “Simply put, the meltdown of traditional ground rules and a tough, albeit improving, jobs picture mean you have to think differently. There is a saying that the best way to predict the future is to invent it. And now the only person who can invent your future is you.” 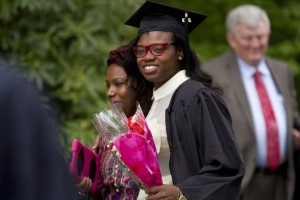 Basia Braboy ’13 and a family member walk toward Alumni Gymnasium for a post-Commencement luncheon. Photograph by Phyllis Graber Jensen/Bates College.

Hirshberg held out four pieces of advice, illustrated with tales from the precarious early days of Stonyfield Farm — now a business topping $350 million in annual sales.

“The good news is that by attending to our social and environmental problems, there are endless opportunities. If you are creative, determined and opportunistic in putting your amazing Bates experience to work, you and the world will benefit. Those who question conventional thinking will be in the best positions to seize the next wave of jobs and economic opportunities.”

He added, “I do know Gandhi was right when he said that anyone who feels they are too small to make a difference has never been in bed with a mosquito.”

In his closing benediction, Blaine-Wallace urged the graduates to shun complacency and stay in touch with the inner voices that urge something better. Quoting John Donohue’s Benedictus: A Book of Blessings, he said:

“May you have the courage to listen to the voice of desire / That disturbs you when you have settled for something safe.

“May you have the wisdom to enter generously into your own unease / To discover the new direction your longing wants you to take.”