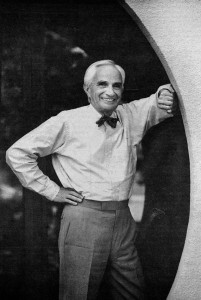 Philip Isaacson ’47, photographed outside his Lewiston law office in 1993 by Phyllis Graber Jensen.

The Portland Press Herald and Lewiston Sun Journal each report and comment on the death of lawyer, art critic and author Phillip Isaacson ’47.

From Portland Press Herald art critic Daniel Kany: “Phil loved culture. But to him, culture was people and not just the fancy frosting on some uninteresting cake. He was a worldly man who never forgot where his home was.”

From the Sun Journal‘s Mark Laflamme: “The easy thing to do would be to remark that a local lawyer has passed away, yet Isaacson was so much more than a partner at Isaacson & Raymond. He was a prolific photographer, an author, a supporter of the arts and a newspaper columnist. He was named Maine’s Most Cultured Man by Maine Times.”

Much of the praise in a Portland Press Herald story by longtime arts reporter Bob Keyes is for Isaacson’s spare, direct writing style, both in his art reviews for the Press Herald over nearly 50 years and in his books, including his introduction to architecture for children, Round Buildings, Square Buildings, & Buildings That Wiggle Like a Fish.

Here’s a sample from Isaacson’s final review for the Press Herald, on May 12, of an exhibition by artist Jim Marshall, whose works of sculpture are derived from simple paper bags:

“A good building can serve the world in diverse ways and, as James Marshall advises, so can a paper bag. I cannot speak on the aesthetics of paper bags other than to say that the pleasure of the certainty of its form and its functional assurance make disposing of one a reflective experience. I hate to throw one away. In their best iterations, paper bags are among the most perfectly considered objects that commerce offers us…. Paper allows us to select almost any level of utility we wish it to have. It is the most compliant of materials and does not resist intelligent modification. It has a private language as does, say, the Brooklyn Bridge or the Western Wall of the Temple in Jerusalem or the Pyramids at Giza. Each speaks of strength and I easily include paper among them. Like them it is a material for the ages.”

Below is an audio slide show featuring Isaacson talking about Hathorn Hall during a Reunion walking tour of campus in 2011: