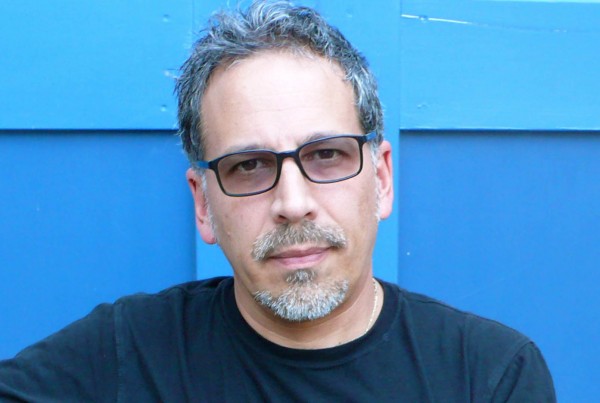 Rubén Martínez is the 2013 Otis Lecturer at Bates. (© Angela Garcia)

Titled Desert America: Politics and Contemplation on the Mythic American Landscape, Martínez’s presentation is free, but tickets are required and are available at bit.ly/bates-otis13. A reception and book signing take place in the Olin Arts Center lobby immediately following the lecture.

“Searing, erudite, evocative, gritty and funny are not adjectives I often apply to a single book, but there are few writers as singular as Martínez,” historian Richard White wrote about Desert America: Boom and Bust in the New Old West.

Published in 2012 by Metropolitan Books, Desert America weaves Martínez’s own experiences and careful reporting together into stories that evoke a new world of extremes: outrageous wealth and devastating poverty, sublime beauty and ecological ruin.

Martínez was inspired to start Desert America in the late 1990s as personal problems drove him to seek a kind of refuge in California’s Joshua Tree Desert. Past deadline on a book project, “I was broke and doing a lot of drugs,” he told the Santa Fe newspaper.

“I began a period of 10 years living in the borderlands,” from California to New Mexico to Texas, and elsewhere. “The book begins with me trying to get my life back together and trying to live in these other settings, and noticing I wasn’t the only one in trouble in that landscape.”

Martínez’s work broadly explores the lives of immigrants and the impacts of globalization, and his narratives emphasize human relationships. A native of Los Angeles and the scion of immigrants from Mexico and El Salvador, Martínez holds the Fletcher Jones Chair in Literature and Writing at Loyola Marymount University, and is an artist in residence at Stanford University’s Institute for Diversity in the Arts.

His other books include Crossing Over: A Mexican Family on the Migrant Trail (Paw Prints, 2008) and The Other Side: Notes from the New L.A., Mexico City and Beyond (San Val, 1993).

He is an Emmy-award winning journalist with two decades of experience in print, broadcast and online media. He hosted and co-wrote the feature-length documentary film, When Worlds Collide: The Untold Story of the Americas After Columbus (2010), shot on location throughout Latin American and Spain, for PBS.

As a musician, he has collaborated with the likes of The Roches, Los Illegals and Concrete Blonde. A veteran of the spoken-word and performance art scenes, he is the host of the Variedades performance salon in Los Angeles, featuring interdisciplinary shows that focus on topical themes.