After a decade of service as dean of students at Bates, Tedd R. Goundie has announced that he will step down at the end of this academic year. 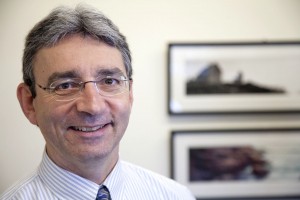 Bates Dean of Students Tedd R. Goundie has announced that he will step down at the end of the 2013-14 academic year.

In sharing the news with the college community, President Clayton Spencer said, “I am deeply grateful to Tedd for leading our student life program with exceptional thoughtfulness and a steady hand during a time of transformational change in the residential dimension of the liberal arts experience.”

Spencer said that Goundie, who spent 23 years in teaching and in student life at Swarthmore College before coming to Bates in 2004, “has been a wonderful partner to me during my first year on campus under sometimes very challenging circumstances. I have been extremely impressed by his depth of concern for our students, his nuanced judgment in every situation, and his impeccable integrity in all that he undertakes. I have learned a great deal from Tedd, and I am very pleased that he will remain in his role through this academic year.”

In 2004, Goundie said that the goal of his work as dean was to help “ensure the development of the whole individual, equipping graduates with critical intellectual skills to pursue their passions with joy and commitment.”

Under Goundie’s leadership, the college addressed a range of residential life issues and created proactive ways for students to play a larger role in improving residential life.

The Code of Student Conduct was revised and a bystander intervention program was initiated to moderate risky student behavior. Students have taken on more of the planning and execution for orientation programming, and AESOP — the student-led orientation program that brings first-year students together in small groups for off-campus experiences at the start of the year — has been expanded, with 70 percent of first-year students now participating.

At a time of heightened awareness of the importance of the residential experience in a liberal arts education, Goundie played a major role in the successful planning of the 152-bed residence hall at 280 College St., which opened in fall 2007.

Goundie sought to keep the enterprise of learning at the forefront of the building program and design. As he told Bates Magazine in 2005, at Bates “your living space is also where serious academic work happens. I don’t think you can underestimate the effect this [new residence] can have on student life at Bates.”

Included in 280 College are two study rooms for individual or small group study, as well as a multipurpose room that can be used for review sessions or small lectures or seminars. With a central, open lounge with a fireplace, a well-planned kitchen and combined study and social spaces, 280 College is a popular campus residence. 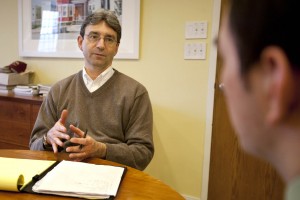 Under Goundie’s leadership, the college addressed a range of residential life issues and created proactive ways for students to play a larger role in improving residential life.

Goundie’s other accomplishments in the academic sphere include the development of advising for the new general education curriculum, regularization of services for students with learning disabilities and improvements in the system for early warnings about academic performance.

Associate Professor of Art and Visual Culture Ned Harwood has served with Goundie on the college’s Committee on Academic Standing. Harwood said, “I am often struck by the complexities and difficulties of Tedd’s demanding job as dean of students. It is a job in which, I imagine, one can go from exhilaration and satisfaction to frustration and heartbreak in the space of a couple of hours.”

Harwood added that the position “requires someone who is generous and patient, clear-eyed and resilient, responsible and good-humored. It also requires unimpeachable integrity. Tedd brings all of those skills to bear as we navigate through the petitions in our meetings, and in doing so he has made those meetings a high point of my week.”

Reflecting on his 10 years at Bates, Goundie said, “Much of our most meaningful work in student life happens when students run into trouble. While those metrics have moved in the right direction over the last decade, some dramatically, I measure success one student at a time.

“Most students don’t ever need to see me, but I think of those who faced serious problems, who sat on the couch in my office, talking it through. I feel both great satisfaction watching these students walk across the stage a year or so later to accept their Bates diploma, and truthfully, admiration for the resilience of these students in the face of the obstacles they overcame so they could succeed.”

A 26-year veteran of student life in small residential liberal arts colleges, Goundie will share plans for the next phase in his career in the months to come.