On weekends throughout the fall, the Brooks Quimby Debate Council has sent teams across the Northeast to compete against the country’s — and in many cases the world’s — best debaters. The results? Judge for yourself: 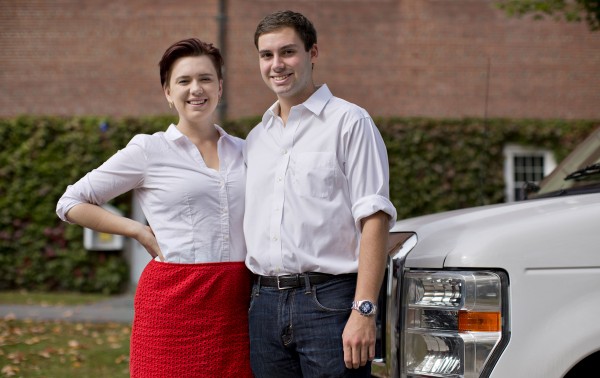 Next to a familiar rental van, Taylor Blackburn ’15 and Matt Summers ’15 get ready to drive the Bates team to Harvard for a recent tournament, where they finished fifth out of more than 100 teams. (Phyllis Graber Jensen/Bates College)

At the Yale tournament, Bates outperformed teams from Harvard, Stanford, Brandeis, Brown and Princeton in a tournament that’s considered a key prep for the Worlds Universities Debating Championship, this year to be held in Chennai, India, from Dec. 28 to Jan. 3.

Summers will be one of the Bates debaters heading to Worlds, paired with Stephanie Wesson ’14 of Mont Vernon, N.H., along with Blackburn and Stewart.

Summers says that the chance to travel abroad and debate drew him to Bates. 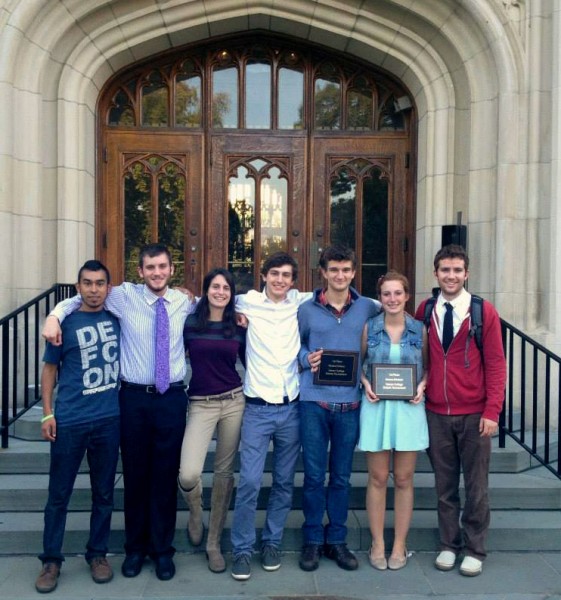 “One reason I ended up at Bates was because I heard there was this wonderful debate team where you could travel the world,” he said. “I’m now living that experience, going to India over winter break and then traveling to China.”

Hovden has announced that Summers will team with Stephanie Wesson ’14 of Mont Vernon, N.H., at Worlds, while Blackburn teams with Stewart.

Unlike other colleges and universities that perform at this elite level, BQDC, acting in the spirit of Bates as a whole, requires no tryouts and makes no cuts.

The team likes to boast that rookies can come to their very first practice on Monday not even knowing to take notes during rounds (let alone how to debate), and be off to a tournament by Friday, ready to engage in five rounds of persuasion and argumentation on topics for which they often haven’t prepared. 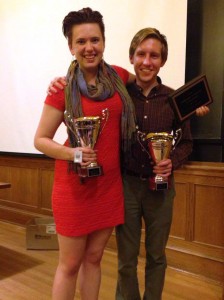 “Bates debate is this wonderful balance between being really open and friendly — a community of friends — while having a competitive edge,” Blackburn says.

For first-years especially, debate provides both a new activity and a community of supportive students interested in unearthing the logic in everyday life and current events.

“The Bates team was incredibly welcoming and were ridiculously supportive,” says Seaman-Grant.

Perhaps more tangibly, debaters say they often see a direct correlation between what they learn in debate and how they succeed in the classroom. Debate hones skills not only in public speaking but also in organization and analysis in papers and research.

On Halloween, BQDC heads into America’s past. Costumed in Colonial-style outfits, they’ll debate the motion, “This house believes that the 13 colonies should declare independence.” The debate takes place in the Edmund S. Muskie Archives at 7:30 p.m. Thursday, Oct. 31.

For alumni interested in catching up with debaters during Homecoming Weekend, the BQDC will hold a reception from 4 p.m. to 5:30 p.m., Nov. 2, at the Edmund S. Muskie Archives.