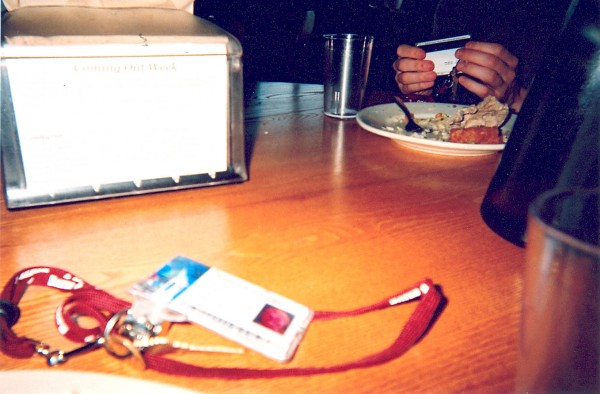 A “Traveling Disposables Project” image for the Red theme. (Courtesy of the Bates Photo Club)

Something fitting that description took shape stealthily on campus in recent weeks, and was at last unveiled at The Ronj on Saturday afternoon, Nov. 9.

The proper name for the hidden wild red space is the Traveling Disposables Project, undertaken by the Bates Photo Club. Intrigued by art that is traveling, collaborative and anonymously produced, the club purchased Fuji disposable film cameras and turned them loose on the mighty Bates campus, inviting anyone who laid hands on one to take a shot and then pass the camera along.

Photo Club members assigned a theme to each camera as a way of providing photographers a framework to work from. The themes were intended to leave room for personal interpretation, thus the vague and random words: Hidden, Red, Wild, Space. (A fifth camera had the theme of Faces, but the pictures didn’t come out.)

Sounds like a thriller novel title, but these themes were carefully thought out and discussed by the club.

Photo Club spokesperson Sophie Pellegrini explained that the aim of the project was to get the word out about the club and engage different people in a social art experiment. Some of the images, she added, may become part of a permanent collection at The Ronj.

The people who explored Hidden captured places that were remote, secluded and unrecognizable. Images included structures that seemed abandoned in the middle of nowhere, and a nude model. 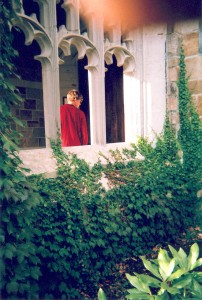 Another Red image from the “Traveling Disposables Project.” (Courtesy of the Bates Photo Club)

Garnet being Bates’ official color, Reds are ubiquitous on campus, making this one of the more varied themes. Photographs showcased familiar spots including the logo at the entrance to the Bobcat Den from the Library Quad, bright red fall leaves, a Coca Cola logo and an exit sign.

The Space theme attracted pictures of the open expanses of the Alumni Walk and enclosed areas in the library. A photograph of man dragging a mattress into a residence turned up under the theme as well.

And Wild showed natural settings, many with fall leaves on the ground.

Prints were displayed in the second-floor gallery space of The Ronj, the college’s student-run coffeehouse, and the exhibition opening took place Saturday.

The opening for the weeklong exhibition created a festive atmosphere complete with cupcakes, chips and music, such as Grace Glasson, from the Crosstones, doing a remix of T-Pain’s “Buy U a Drank (Shawty Snappin’).”

The crowd of approximately 20 danced to the music and chatted about soon-to-be-due papers, the upcoming big party “GLOW” and other concerns. A Colby student on the scene called The Ronj a “cool space to hang out with friends.”

Well, we knew that already, but it was nice to hear it from a visitor.