The next time defensive back Luke Combs ’15 takes to Garcelon Field, he’ll see a lot more than 100 yards of FieldTurf in front of him.

Combs was among a couple dozen students in Geology 103, “Earth Surface Environments and Environmental Change,” who tromped over to Garcelon Field on Monday to get their minds blown, geology-wise.

They executed a simple but effective time-space drill, using the length of Garcelon Field to illustrate the span of Earth’s history. 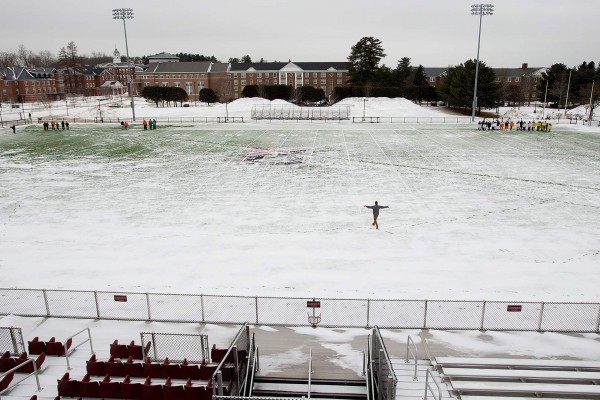 Each student standing on Garcelon Field shows an event in Earth’s history. The depth of geologic history is evident: a few students at the beginning of Earth’s history (far left), then a long time before the emergence of life, indicated by students at far right. (Phyllis Graber Jensen/Bates College)

Their professor, Mike Retelle, explained the project by saying that people have a short attention span, in more ways than one.

If the Earth’s been around for 4.6 billion years, simple math says that each yard of a 100-yard football field equals 46 million years.

On Monday, Retelle’s students placed themselves at various yard lines. Each group held a poster noting a key event and how many years ago it happened.

The first group stood near one end zone with a sign noting that the Earth’s crust was formed just after the planet’s formation. A few yards later, at about the 15-yard line, was a poster stating that the oldest rocks were formed 3.93 billion years ago. 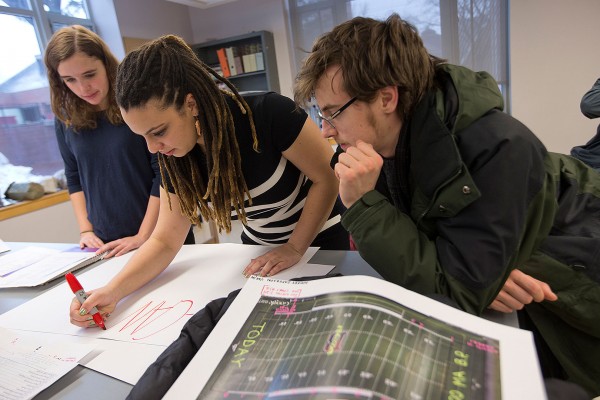 After that, it was yards and yards of nothing. Like a runner scampering free down the sideline, the planet Earth was all alone for another 70 yards, or 3.3 billion years.

In football, inside the 20-yard line is called the red zone, where scoring action is expected. You could say that there’s a planetary red zone, too.

“Everything happens inside the 15-yard line,” explains Combs, an economics major and Asian studies. “There’s a huge gap from when the Earth was formed to when animals start to appear,” about 600 million years ago.

“It’s crazy to see,” he said, reviewing the snow-dusted field, dotted with students. “You have a few students on one end of the field, a huge distance, then everyone crowded inside the 15.” 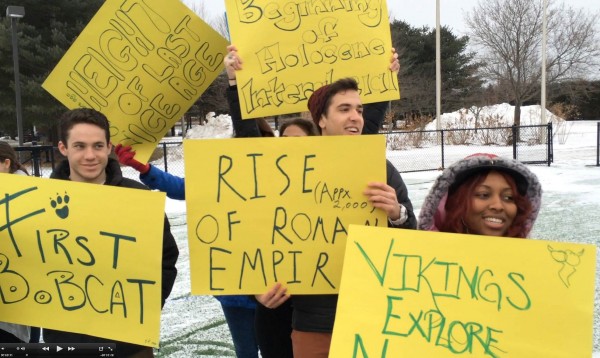 When Earth events are plotted on Garcelon Field, most of the action (including crucial events like the first bobcat) takes place near the goal line.

The first bobcat, 2.5 million years ago, was noted on one poster, though it was hard for that student to stand the required 2 inches from the goal line without getting pushed into the future, err, the end zone.

Another tight fit was the student hoisting a poster noting the rise of the Roman Empire some 2,000 years ago: That needed to be a thousandth of an inch from the goal line.

The final student held a poster noting the founding of Bates in 1855.

From my calculations, that moment, 159 years ago, needed to be spotted one ten-thousandth of an inch from the goal line. Or should we ask the refs for a measurement?