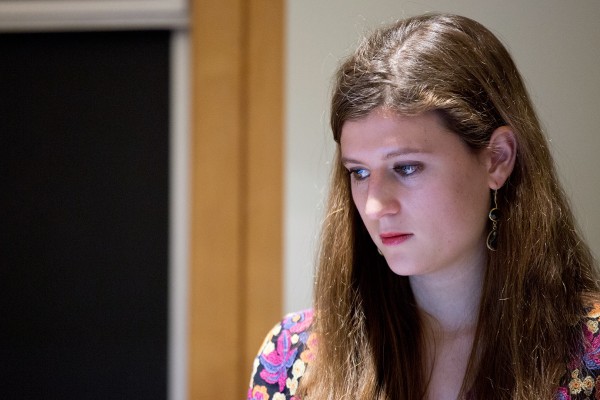 When Rachel Baumann was in sixth grade, her older sister was occupied on a project for long hours at a time.

Naturally, Rachel wanted to know what her sibling Sarah was up to. It turned out to be a scrapbook about their maternal grandparents, Max Segall and Frieda Lopatka Segall. They had died when the sisters were much younger, and Rachel didn’t know much about them.

“My sister’s very artistic and I’m very curious,” Baumann says, “so I just kept asking questions and looking at the photos. And then we started talking about the Holocaust, and that’s where my interest began.”

Baumann’s interest in her grandparents gained a whole new intensity when, supported by a Phillips Fellowship from Bates, she spent summer 2013 in Germany and Poland researching the Segalls’ story of courage, audacity and survival as Jews in Nazi-controlled Europe.

And what a story it is — a chronicle of deportations, confinements, escapes and evasions whose resolution seems almost too good to be true.

Frieda and Max grew up in the same neighborhood in Berlin, and started dating in their teens. Born to a Jewish father and Gentile mother, Frieda defiantly made a formal conversion to Judaism in 1936, even as the Nazis were escalating their oppression of the Jews. 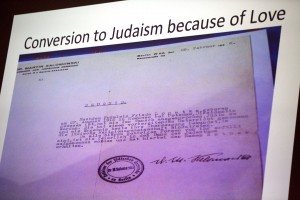 An image from Baumann’s presentation showing a document certifying her grandmother’s conversion to Judaism during the ascent of Nazi anti-Semitism. (Phyllis Graber Jensen/Bates College)

The pair were separately deported from Berlin to the Warsaw Ghetto, somehow managed to find each other there, were secretly married there — and escaped twice, the second time for good.

Late in the war, they made their way back to Berlin, where they hid out in a suburb until the end of hostilities a year later. That was Max’s idea: Counterintuitive as it seems, he rightly suspected that, two years after the Final Solution went into high gear, few Nazis would be hunting Jews in Berlin.

Last year, Baumann spent her summer tracing the Segalls’ footsteps and trying to fill gaps in their narrative. She dug into the records of the Jewish Museum Berlin, the Jewish Historical Institute in Warsaw and other research institutions in the two countries. She conducted more than 30 interviews. And she visited places her grandparents had been.

“I can’t experience what they went through. But 75 years later, at the same age that they were, I wanted to see where they lived,” Baumann says. “They were just human beings in love when they were my age, just living where they were living.”

Her research project had a second dimension as well. Even as she sought to understand her grandparents’ experiences under the Nazis, she researched German attitudes today toward Jews and the war. She came away impressed by German efforts to take responsibility for the Holocaust.

In a campus presentation last semester, Baumann — wearing a dress of Frieda’s — showed images from two modern projects commemorating the fate of Berlin’s Jews and other victims of the Nazis. In one district, the “Places of Remembrance” initiative comprises 80 eye-catching street signs that chronicle the escalating restrictions imposed on Jews under Nazi law.

And embedded in sidewalks throughout the city are Stolpersteine (literally, “stumbling blocks”), memorial paving stones that name victims of the Nazis, mark their last chosen places of residence and explain, with poignant brevity, what happened to them.

If we don’t examine the past in light of the present, says Baumann, “What will we have learned?”

Advised by Thomas Tracy, Phillips Professor of Religious Studies (both Baumann’s fellowship and Tracy’s chair are supported by a bequest from former Bates President Charles Phillips), she is pursuing an interdisciplinary major investigating comparative literatures of justice.

“I’m comparing literature written during the Holocaust,” she says — “poems, songs written by people in concentration camps. And I’m comparing them to memoirs written after, because I’m trying to argue that both are examples of resistance.

“The victims had everything taken away from them, except for their imaginations.”

The Segalls had always been reluctant to talk about the war. But Baumann’s parents, journalists Vivian Segall and Paul Baumann, eventually persuaded them to be interviewed. They compiled a basic timeline of the Segalls’ story.

Through her research, Baumann has added much to her family’s understanding of that story. But a central character remains elusive: Josef Glinski, the German soldier who helped the Segalls escape from Warsaw.

While discovering little else about him, Baumann tracked down his daughter-in-law in the city of Detmold, where the Segalls also lived until they came to the U.S., in 1949. But the daughter-in-law didn’t want to talk.

For Baumann, the mysterious Glinski remains tantalizing. He’s a ghost — someone known of, but not knowable. “There are so many gray areas, and the family doesn’t really know, or doesn’t want to talk about it. I feel an obligation to tell his story in relation to my family’s.”

As essential as their bravery and persistence were to the Segalls’ survival, Baumann is acutely aware that sheer luck and basic human kindness were also definitive. They wouldn’t have made it without help from others, such as Glinski. “You met the good Germans or you met the bad Germans,” Baumann says, “and my grandparents happened to meet a lot of good Germans.”

This investigation, Baumann adds, “is a lifelong process for me. When I got home, there wasn’t a sense of, ‘This is done.’ This is something that I will always be doing now.”

Stella James Sims was Bates’ first female Black graduate, but there’s so much more to her story