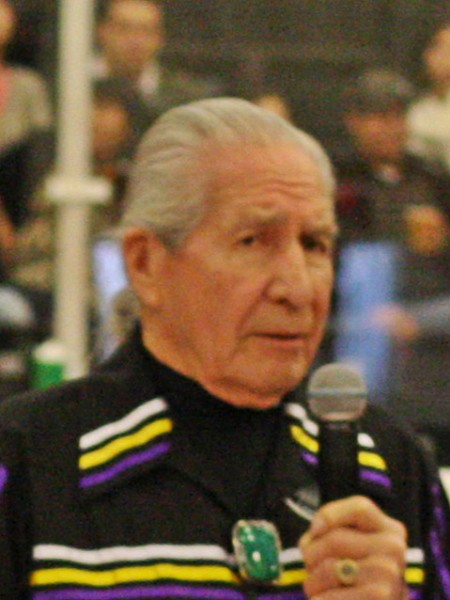 Presented by the Office of Equity and Diversity in cooperation with other offices at Bates, the event is open to the public at no cost. For more information, please call 207-786-6031.

Lyons, a member of the Onondaga and Seneca nations, is a Faithkeeper of the Turtle Clan and a chief of the Onondaga Nation Council of Chiefs of the Six Nations of the Iroquois Confederacy, the Haudenosaunee (“People of the Longhouse”).

Lyons attended Syracuse University on an athletic scholarship. A lifelong lacrosse player, he was a standout in the sport at Syracuse, was later elected to the Lacrosse Hall of Fame and today is honorary chairman of the Iroquois Nationals Lacrosse Team.

Graduating Syracuse with a degree in fine arts, Lyons became a successful commercial artist. He later taught at the University of Buffalo, and was named a SUNY Distinguished Service Professor and Professor Emeritus of American Indian Studies.

In 1977, Lyons was a founding member of the Traditional Circle of Elders and Youth, a council that seeks to infuse Native American culture into contemporary cultural and political discourse.

He serves on the Executive Committee of the Global Forum of Spiritual and Parliamentary Leaders on Human Survival. Among many other honors, he is a recipient of Sweden’s prestigious Friends of the Children Award, along with his colleague, the late Nelson Mandela.

Lyons was the subject of Oren Lyons the Faithkeeper, a 1991 PBS documentary by Bill Moyers, and appeared in the 2007 documentary The 11th Hour, a documentary on the state of the natural world and climate change, produced by Leonardo DiCaprio.

He is the author, co-author or editor of several books and has illustrated a number of children’s books.

Here’s a list of the Bates and related offices and programs making Lyons’ visit possible:

The departments of history and athletics; the environmental studies program; the Harward Center for Community Partnerships; the offices of Intercultural Education and of Sustainability; the Learning Associates Program; the Multifaith Chaplaincy; and the Bates Group of the Wabanaki-Bates-Bowdoin-Colby Collaborative.