Professor of Geology Dyk Eusden ’80 has a key role in the new film documentary Beyond Granite: The Geology of Adventure.

Featuring gorgeous vistas in and around the White Mountain National Forest, the film takes viewers up, down and around various peaks, valleys, cliffs, riverbeds and ravine — visual evidence of the crushing geological natural forces that made what we see today. 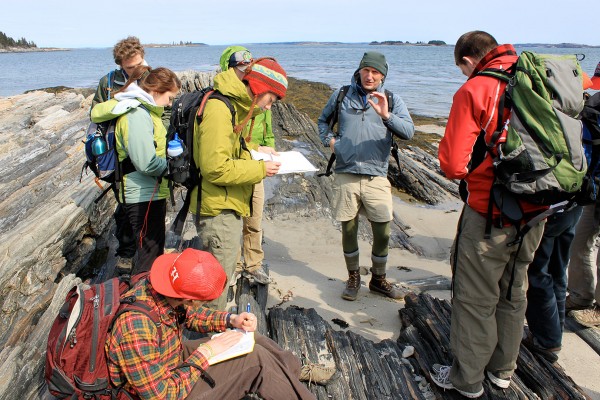 During a field trip to Cliff Island, Professor of Geology Dyk Eusden ’80 teaches students how to identify and measure different rock formations in order to create a map in ArcGIS, a mapping and spacial analysis tool. (Judson Peck ’11)

The film also shows people connecting with the mountains, whether by paddling, biking, hiking, skiing, or climbing.

“But what is it we are connecting to?” asks narrator Sarah Garlick, who is curating an exhibition of the same name opening March 25 at the Museum of the White Mountains of Plymouth State University.

“That’s the reason I became a geologist.”

This is where Eusden enters the film, as an expert who links the experiential with the geological. “Hiking and knowing the landscape, understanding how it formed — that’s the reason I became a geologist,” he says.

Eusden, co-author of The Geology of New Hampshire’s White Mountains, offers the viewer some nugget-sized insights into the region’s geologic history. He calls it a “four-part puzzle.”

Tectonic collisions, occurring about 400 million years ago, are the first part of the puzzle, Eusden says. As continental plates collided, the peaks of the Presidential Range rose high into the sky.

Beyond Granite: The Geology of Adventure

Then came the volcanic era, 180 to 200 million years ago, that led to volcanic features and igneous rocks like granite and syenite, great for rock climbing.

Dyk Eusden ’80 is co-author of The Geology of New Hampshire’s White Mountains.

Wild climate variations about a million years ago, including repeated periods of glaciation, created distinctive features like the Huntington and Tuckerman ravines.

And the present era is the fourth piece, where the focus is on climate change and the potential for more frequent and intense storm events, like Tropical Storm Irene, that will continue to change the terrain.

By the way, Eusden is not the only Bates connection to the exhibition: seniors Josh Sturtevant of Freeport, Maine, and Cam Held of Honeoye Falls, N.Y., collected and provided rock samples for the exhibition. Both are honors thesis candidates whose projects involve geologic mapping of areas within the White Mountain National Forest.