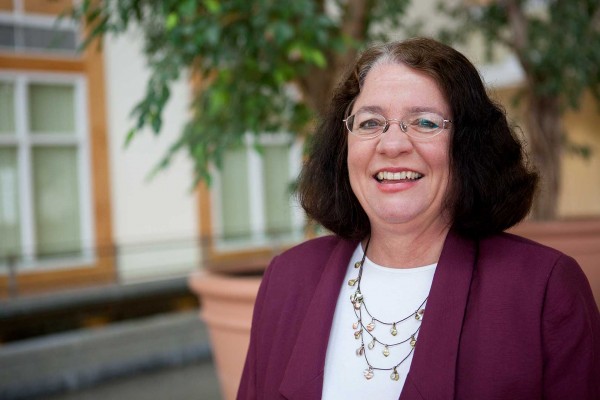 Community engagement makes Bates distinctive — and the Department of French and Francophone Studies has, in turn, found distinctive ways to put that ethos into practice.

“We have a particular opportunity because Bates is in a French-speaking community,” says Mary Rice-DeFosse, professor of French and Francophone studies.

Since arriving at Bates 30 years ago, Rice-DeFosse has often aligned her curriculum with the interests of that community, one first defined by its French Canadian origins and now influenced by French-speakers from such African nations as Djibouti, Chad and Congo.

Rice-DeFosse’s achievements in community-engaged teaching have been, you might say, formidable. The Maine Legislature recently honored that track record by inducting her into the Maine Franco-American Hall of Fame, where she joins such notables as the late Lewiston politician Georgette Berubé, sociologist Madeleine Giguère and Yvon Labbé, a champion of Maine’s Franco culture.

Rice-DeFosse was inducted in a March 19 ceremony at the State House. She was nominated for the Hall of Fame by state Rep. Margaret Rotundo, director of policy and strategic initiatives for Bates’ Harward Center for Community Partnerships, and chosen by the state’s Franco-American legislators.

“I was very moved,” says Rice-DeFosse. “There are so many people in the community who are deserving of that kind of an award, and it’s unusual for people who are not of French heritage.” (Her husband, the late John DeFosse, was of French descent.)

One of Rice-DeFosse’s best-known community projects is a video documentary depicting women who wove an early and important social safety net in the Twin Cities. Les Soeurs Grises / The Grey Nuns: Elles sont venues, elles ont servi / They Came, They Served was completed in 2012, and is part of a permanent exhibition at the Franco-American Heritage Center in Lewiston (now known as the Franco Center).

A branch of the Sisters of Charity of St. Hyacinthe, the Grey Nuns came to Lewiston in 1878 on the heels of French Canadian immigrants drawn by the thousands to work in Twin City mills. The nuns established the city’s first hospital (today’s St. Mary’s Regional Health Center) along with a nursing home, two orphanages and a school for nurses, all just blocks from Bates.

The Grey Nuns draws heavily on interviews, several conducted by Bates students, with former residents of the orphanages and other community members, as well as footage of members of the order provided by St. Mary’s. Rice-DeFosse researched, wrote, narrated and co-produced the film, created at the behest of the Franco Center and in collaboration with St. Mary’s Health System, the contemporary descendant of the nuns’ good works.

“I learned an enormous amount about what these women had done,” she says. “How incredibly innovative they were, in terms of delivering health care services, care for the elderly and care for children without parents and or whose parents were working.”

Rice-DeFosse’s department, in recent years and with funding from the Harward Center and the Maine Campus Compact, has restructured its curriculum to incorporate community-engaged learning at every course level.

“In the early levels, it’s just an introduction to the local community, and the fact that there are French speakers here,” she explains. More advanced students have done translations for community-related websites and museum exhibitions, and have conducted oral histories with local residents for an ongoing project related to Rice-DeFosse’s course “French in Maine.”

“I think that introduction to the notion that there are different communities within this community is important,” Rice-DeFosse says. “And we’ve found that students, having been introduced to community-engaged learning here, are able to take that experience abroad.” Students frequently design and conduct community research projects while studying abroad, often in Africa.

Community engagement has its impact on campus as well as in the community. “I like to develop in students the appreciation that there are many ways of thinking,” says Rice-DeFosse, “and the ability to think critically inside of the French language, because it immediately draws students outside of themselves.”

For students undertaking community-engaged learning in the context of French and francophone studies, the language “is no longer kind of a classroom game, about memorizing words and parroting,” as it might be at the high school level.

“Because we live in Lewiston-Auburn, there is something about the language and the cultural differences that make what we are teaching real,” says Rice-DeFosse. “So that connection is, I think, truly vital.”