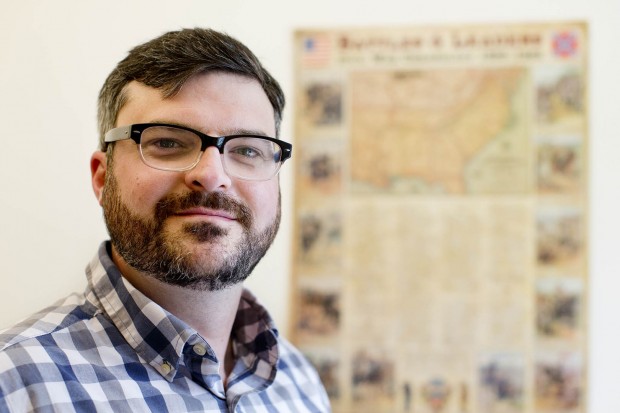 “It’s hard to think of anything more interesting than why people commit crimes,” says Michael Rocque, a criminologist who joined Bates this summer as an assistant professor of sociology.

Rocque brings a distinctive perspective to Bates sociology: He previously served as director of research for the Maine Department of Corrections. An important part of his DOC work was evaluating the department’s tools and programs — for instance, Maine’s new, nationally unique approach to the incarceration of first offenders aged 18 to 25.

The program is designed around the fact that our brains typically aren’t fully mature until our mid-20s, says Rocque, who still serves as an unpaid adviser to the DOC. In the new program, these young offenders are “actually housed in a juvenile facility and given access to a lot of programming not present in the adult system. The program is getting a lot of attention.” (Read Rocque’s column about the program in the Bangor Daily News.)

Read more profiles of tenure-track faculty new at Bates in 2014:

Intellectual interest drives Rocque’s criminology career, but so does a sense of mission. “Something that appealed to me about working at Bates was that the department was looking for someone interested in race, crime and justice,” says Rocque.

How those themes intersect is a compelling focus for him, especially the inequalities in law enforcement and the criminal justice system. “I’m driven by a desire to assist in the quest for social justice,” he says. For instance, Rocque is part of a research team that just finished an analysis of racial bias in the application of the death penalty.

“We live in the United States — it’s supposed to be a democracy, equal rights for all,” he says. “You hope that it’s not just, ‘Oh, that’s interesting, blacks who kill whites are much more likely to be given the death penalty,’ and the research just gets put away.

“You hope that your research is used to make the world a better place.”

Along those same lines, Rocque wants to help build bridges between scholars and the people on the front lines of the criminal justice system.

Criminologists believe they could make a difference — but, as Rocque says, “not a lot of practitioners have the time to look through the journals, nor are they necessarily well-versed in the language and analyses used.

“There needs to be an intermediary,” and that’s a role he strives to fill. In his time on staff at DOC, for instance, Rocque produced a departmental newsletter that included digests of new research pertinent to the work of the department.

A Maine native, Rocque studied at the University of Maine and the University of Maryland, and earned a doctorate at Northeastern University. In his dissertation, he took several theoretical explanations of “desistance” — the tendency of criminals to commit fewer crimes and eventually stop as they age — and argued that each, in its own way, represents the process of maturation.

For instance, so-called social-control theorists point to common life transitions as the moderating factor, he explains. “Men will be hell-raisers, and then getting jobs or getting married will turn them around.”

Another theory, which subsequent research showed to be the most compelling, explains desistance as a product of internal factors, rather than external.

“Over time, people start to think of themselves in a different way,” Rocque explains. An offender’s self-image might transition from being a badass “to someone who wants to contribute to society or to a family man. That identity shift changes their behavior.”

Rocque’s own identity as a person dealing with crime from the right side of the law emerged early, in the form of a fascination with the novels starring teen detective “Brains” Benton. Later, he says, “I did look into becoming a detective. But when I was an undergrad, I learned of the criminology concentration in the sociology department.

“And I fell in love with how this type of field works.”