Slideshow: 24 moments as the Class of 2018 gets to know Bates and vice-versa

Bates photographers Sarah Crosby and Phyllis Graber Jensen followed the Class of 2018 from its arrival on Aug. 25 through the first week of classes.

The markers on the road to becoming an official Bates student include getting accepted (of course), making your deposit and showing up on campus. For Andrew Freeman ’18 of Newton, Mass., the key moment came as he got his Bates ID picture taken in Chase Hall Lounge. “Now it’s official!” he declared. Andrew’s parents are Scott ’85 and Kristine Falvey Freeman ’86. (Phyllis Graber Jensen/Bates College) 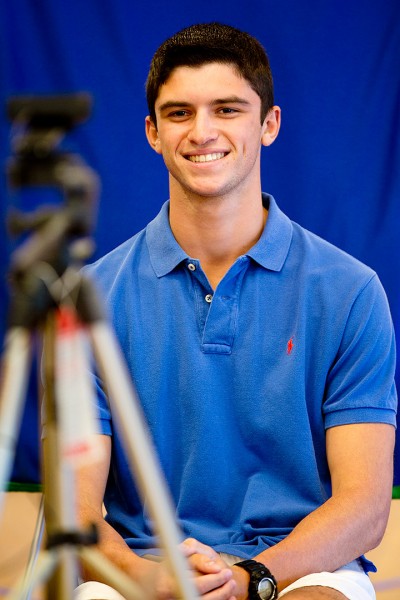 Jennifer Pardo displays two boxes of “mom-approved Twinkies” as her son James ’18 registers complete approval of the gift from an aunt. “I might wait until graduation to eat them,” says James, referring to the pastry’s reputed endless shelf life. Fun fact: The shelf life of a Twinkie is 45 days. The Pardo family is from South Salem, N.Y. (Phyllis Graber Jensen/Bates College) 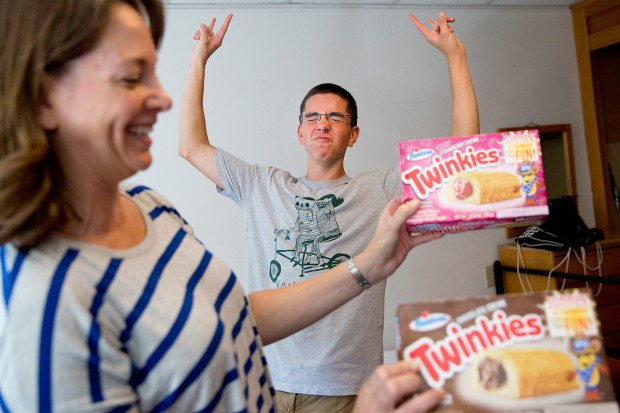 In 1986, Miss Manners observed that as fewer people made their beds each morning, we’ve lost “pleasant, orderly, civilized living.” Here, Mark Blau strikes a blow for civilization (and helps his son Adam ’18 feel loved and comforted) by making Adam’s bed in his 280 College Street room. While these two Blaus were at Bates, Adam’s mom and brother were moving in at the University of Wisconsin at Madison. The family is from Pacific Palisades, Calif. (Phyllis Graber Jensen/Bates College) 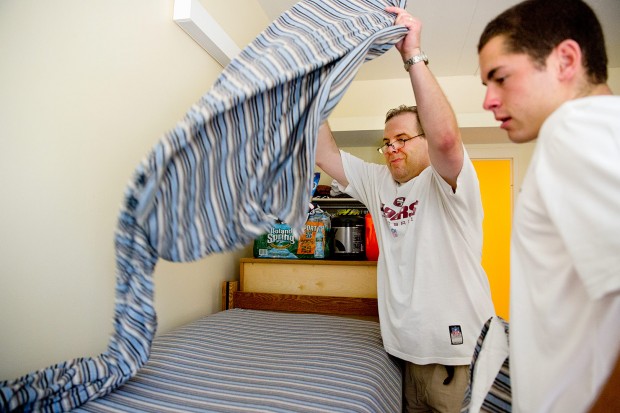 Joakim Cohen ’18 of San Francisco arrives on campus with his mom and dad, Herve Cohen and Guetty Felin. His dad said the day was about seeing Joakim “not only discovering his new environment with excitement but at the same time meeting new, friendly students and engaging with them…and, with some, thinking about creating a band together — all in one day. That was really awesome to see and to feel!” (Sarah Crosby/Bates College) 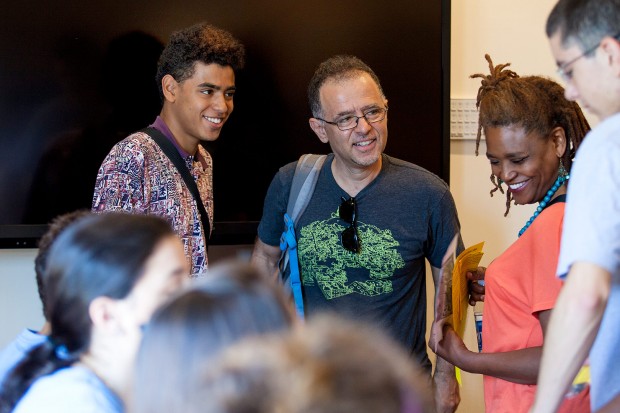 Alex Brown ’17 of Hanover, N.H., takes the high end as he helps James Laughlin ’18 of Steamboat Springs, Colo., carry a couch into Smith Hall. So how much did it cost to haul a couch from Colorado to Maine? Nada, explains James’ mom, Linda Laughlin, because “we found it on the side of the road in Freeport, and I said ‘dorm couch!'” (Sarah Crosby/Bates College) 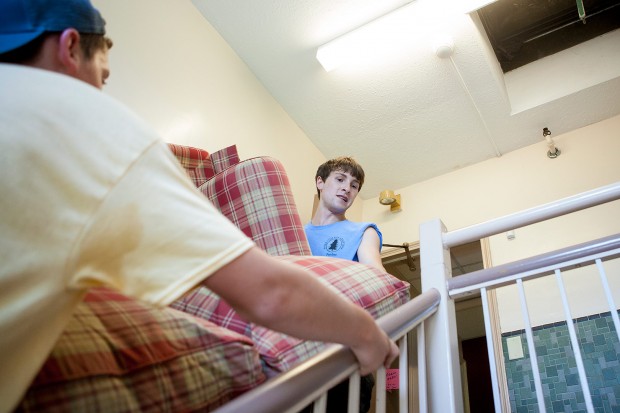 Outside their Smith Hall residence, roomies Katherine Hartnett ’18 (left) of St. Paul, Minn., and Amelia Wilhelm ’18 of Charlotte, N.C., meet face to face for the first time. “I knew what she looked like from Facebook,” Hartnett says, “but here she is, finally, which is cool!” (Sarah Crosby/Bates College) 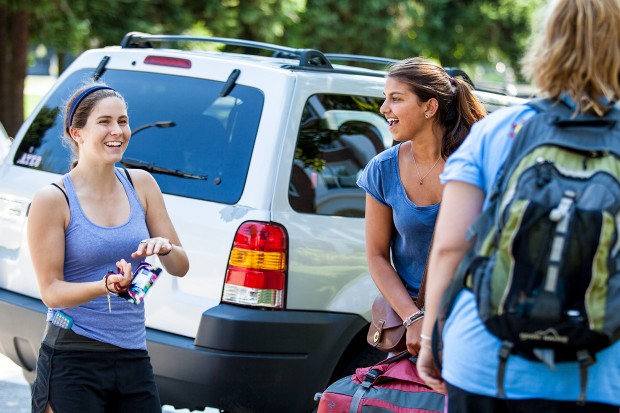 Keep this photo in mind as you scroll through the next few. This is a group of first-years departing Chase Hall for their AESOP preorientation trip. They look tentative? You bet. (Phyllis Graber Jensen/Bates College) 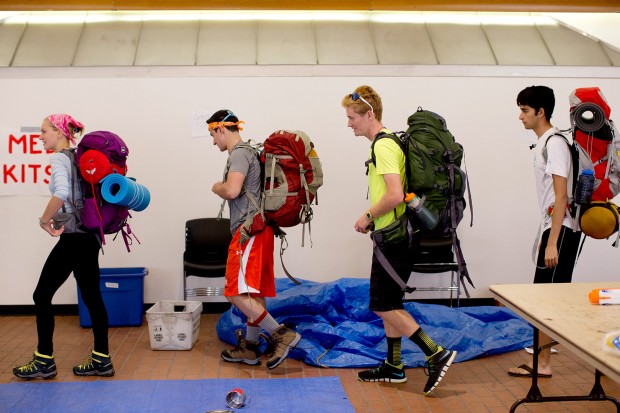 You know that old parenting tip that says car rides are perfect for connecting with your kid because eye contact is limited and a destination is in sight? Maybe the same goes for canoe trips. Here, Laura Rand ’18 of Barrington, R.I., and Christopher Koziel ’18 of Newton, Mass., float under Westons Bridge in Fryeburg, Maine, during their AESOP canoe trip. As another first-year noted as she chatted with her own boat-mate, “there’s bonding happening here.” (Sarah Crosby/Bates College) 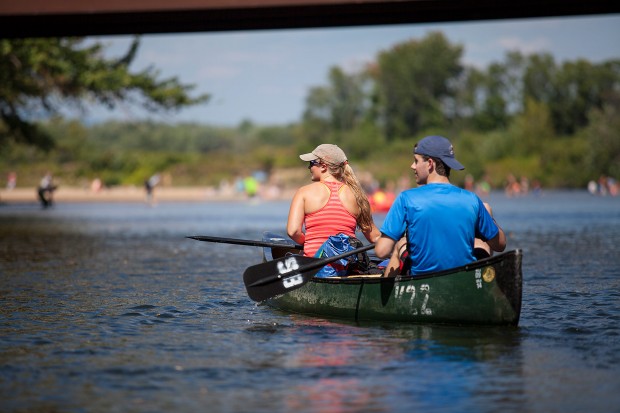 Meanwhile, back on campus, Frank Williams ’18 of Brookline, Mass., goes through a speed test on the opening day of football training. The drills help coaches know their players’ speed and strength benchmarks, but head coach Mark Harriman says he’d do the drills regardless of the data. “Football teams have a lot of moving parts,” he says. During most practices, the receivers, defensive backs, running backs, etc., work out separately from one another. “This brings us all together. It’s a rare time, outside game day, when we’re focused on the same thing as a team.” (Phyllis Graber Jensen/Bates College) 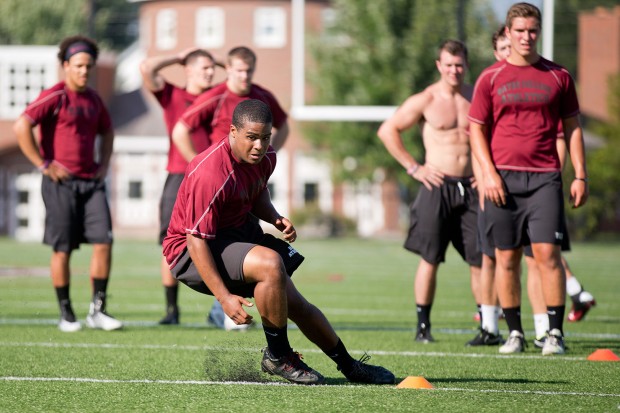 It’s Day 2 of the preorientation trips, and we’re at Popham Beach in Phippsburg, Maine. “If you’re going to take anything seriously, it might as well be your own happiness.” So said Joseph Marques ’15 of Lexington, Mass., one of the leaders of the AESOP yoga and meditation trip to Popham. Marques, wearing the blue shorts in the photograph, is president of the Bates Dharma Society. (Phyllis Graber Jensen/Bates College) 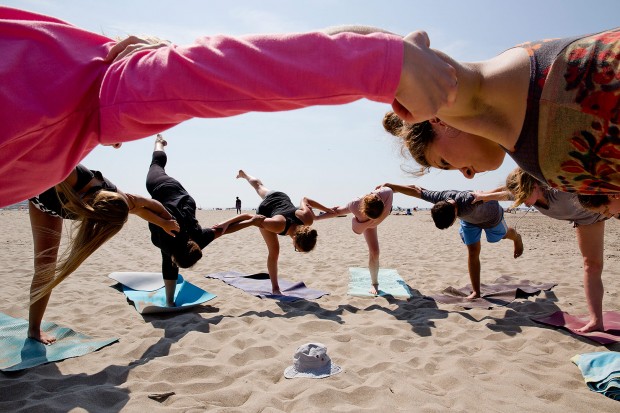 On Day 3 of the outdoor trips, co-leader Kai Payne ’15 (left) of Jamaica, N.Y., and Rob Flynn ’18 of Bedford, N.H., work on a home-building project in Sedgwick, Maine, in partnership with the Hancock County Habitat for Humanity. Making personal connections while contributing to a community is “priceless,” said Payne, “not only to me but to these new students.” (Phyllis Graber Jensen/Bates College) 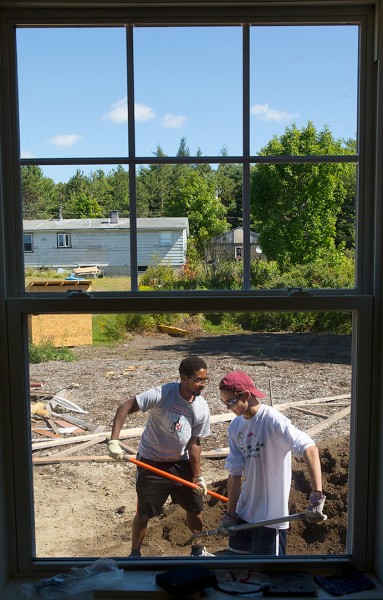 We like photos of climbing because they free us from having to invent tortured metaphors for how first-years feel during their first days on campus when nothing feels natural or easy. In other words, they might feel like Fredrick Cheng ’18 of San Leandro, Calif., as he climbs a cliff face during the AESOP trip to Rumney Rocks Climbing Area. (Sarah Crosby/Bates College) 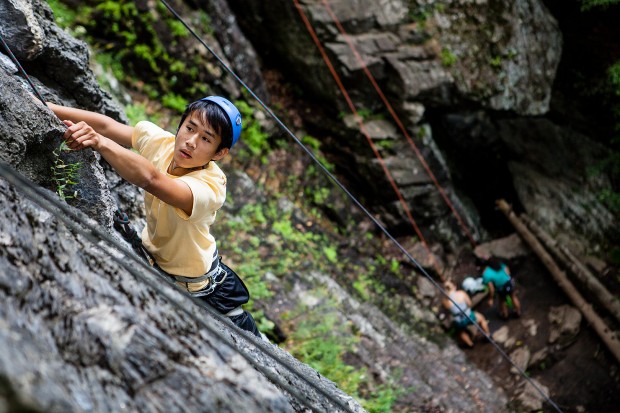 Remember that photo from before, of the first-years leaving for their outdoor trip somewhat gloomily and all in single file? Well, here’s what an AESOP group looks like upon returning to campus. Vive la différence! (Phyllis Graber Jensen/Bates College) 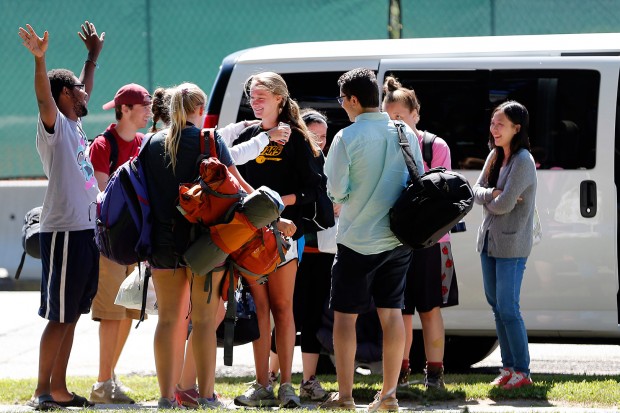 Back on campus for student and parent Orientation, parents get a final chance to check in, check on and check up on their children. Here, Georganne Greene (left) and Andrea Kandel talk with their daughter, Annie Kandel ’18, of Amherst, Mass. “From the first minute Annie got to campus, everything felt right for her. After her admission tour, she was dancing across the Quad,” said Greene. (Phyllis Graber Jensen/Bates College) 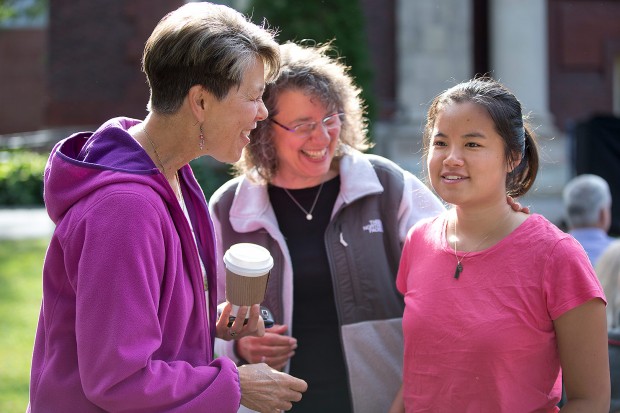 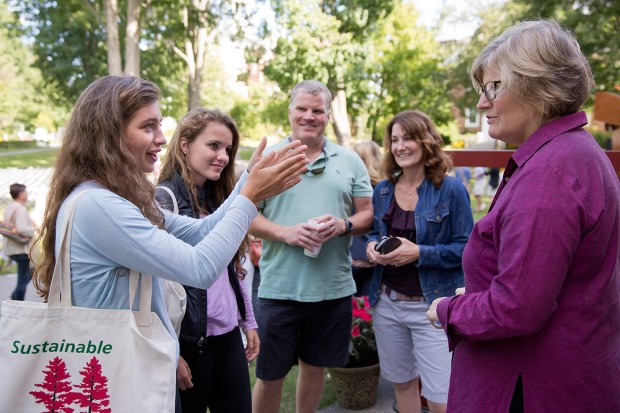 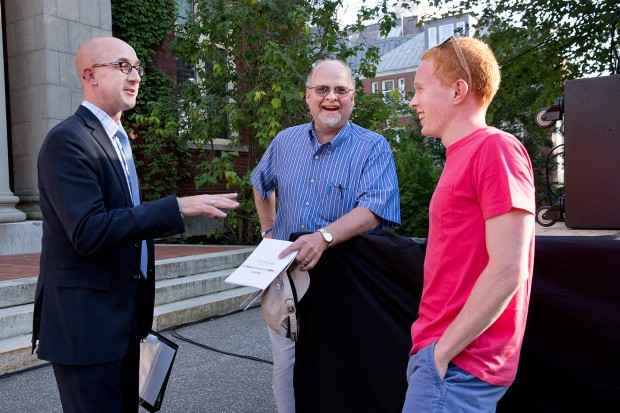 James Reese, associate dean of students, poses with a few of the Willseys who have trodden the Bates earth. At far right is Daniel ’18, and he’s joined by dad David ’81, younger brother Mitchell and mom Lisa. Daniel’s uncles are Robert Willsey ’79 and Jim Willsey ’89, and his grandparents are Lynn Willsey ’54 and Beverly Hayne Willsey ’55. Reese’s friendship with the Willsey brothers goes back to their student days. (Phyllis Graber Jensen/Bates College) 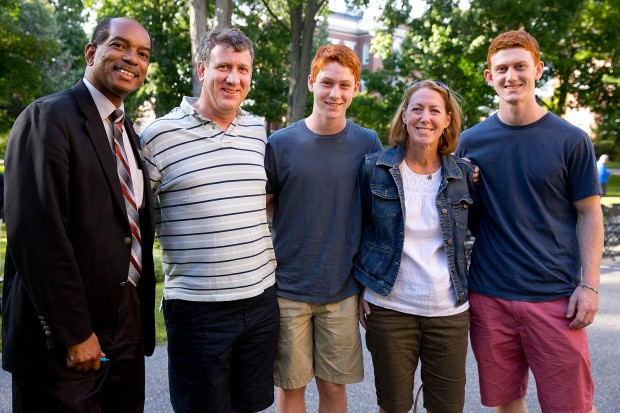 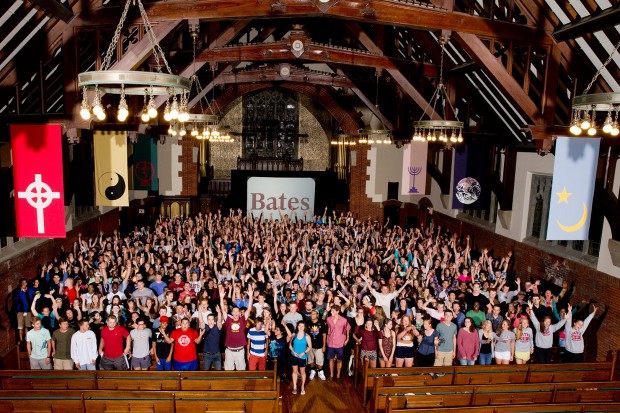 First-year students in Parker Hall meet with their junior adviser, Robert Ibarra ’17, left, of Los Angeles. After a week of wall-to-wall training sessions with other JAs and residence coordinators, learning best practices for supporting students in their residences, it was time to put it all into action. Here, Ibarra follows up with his students about the class-wide gathering they just attended on alcohol awareness, drawing them out while also giving practical information, including emergency phone numbers to enter on their cell phones. (Phyllis Graber Jensen/Bates College) 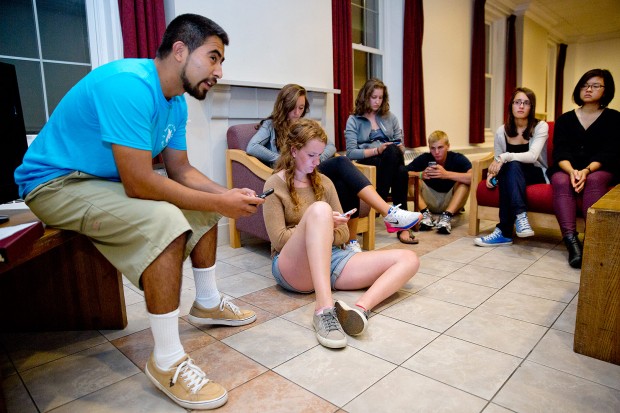 Yes, the Class of 1931 Clock is giving the correct time to members of the Class of 2018 as they march to Convocation for the opening of the new academic year. This year, the event was in the morning instead of late afternoon. (Phyllis Graber Jensen/Bates College) 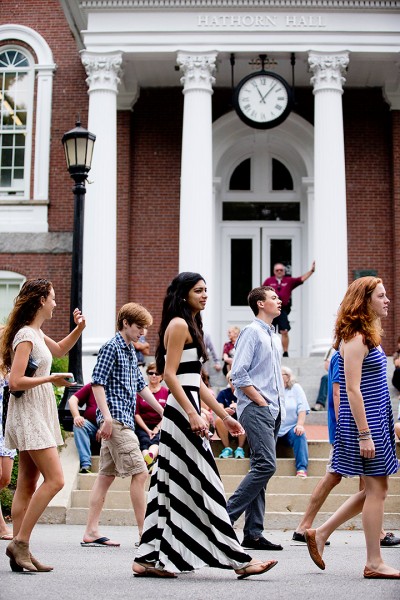 We featured a similar photo last year, of a student taking notes during the Convocation address, so it’s not unusual that first-years are game to engage. She’s taking notes on Dean of the Faculty Matt Auer’s address. “If you value discovery,” he said and she noted, “it’s a great time to be at Bates, or as we say, ‘It’s a great day to be a Bobcat,’ because your own Age of Discovery is likely to be more consequential and fulfilling than the typical collegiate experience of just a few decades ago.” (Phyllis Graber Jensen/Bates College) 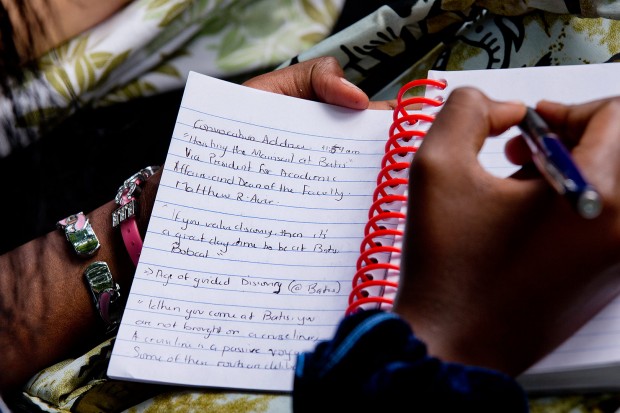 Pride in his eye, Professor Emeritus of History Jim Leamon ’55 greets his grandson Nathaniel Stephenson ’18 of Ellsworth, Maine, during the Convocation recessional. “How do I feel about my new identity as a Bates grandparent?” Leamon asks rhetorically. “I have a deep sense of pleasure and pride in Nate as a student at Bates. His presence at Bates also creates in me a renewed sense of identity with the college…and of growing older.” Nathaniel’s maternal grandmother is Silver Moore-Leamon ’55. (Sarah Crosby/Bates College) 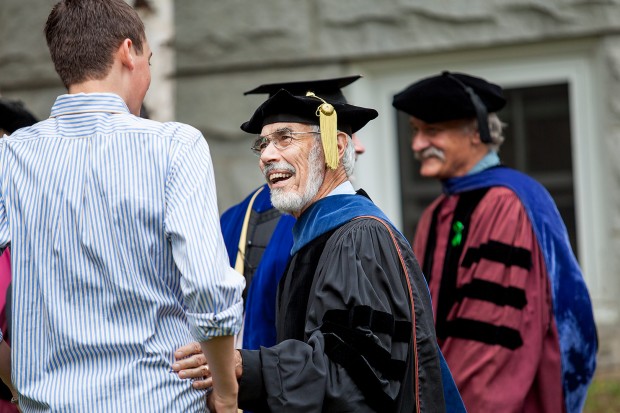 New to Orientation in 2014 was an ambitious program giving every first-year student a walking tour of downtown Lewiston. Led by Darby Ray and colleagues from the Harward Center for Community Partnerships, each walkabout took about 90 minutes and included just a few dozen students. Over two days, Ray and colleagues led 24 tours. “The walkabouts introduced first-years to their new home, what it has to offer and how they can involve themselves in the community,” said Ray, the center’s director. “The tours let them create their own, first-hand impressions of the places, spaces and opportunities in Lewiston.” (Sarah Crosby/Bates College) 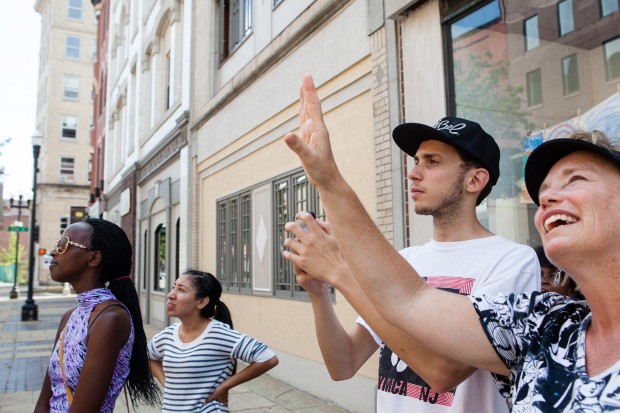 They might not tangle with man-eating Laestrygonians or strung-out Lotus-eaters, but students embarking on a college education are starting a kind of odyssey, so let’s end with this photograph. Building classroom camaraderie by donning laurel wreaths, students in the First-Year Seminar “Classical Myths and Contemporary Art” talk about Homer’s Odyssey with their professor, Lisa Maurizio, associate professor of classical and medieval studies. (Sarah Crosby/Bates College) 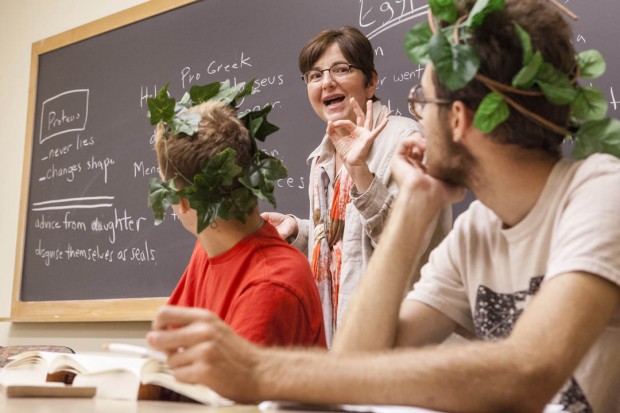 Slideshow: Hour by hour with the Class of 2023 on Opening Day