Bates alumni and parents give $260,000 for ‘game-changer’ squash court

By Victoria Stanton. Published on September 22, 2014 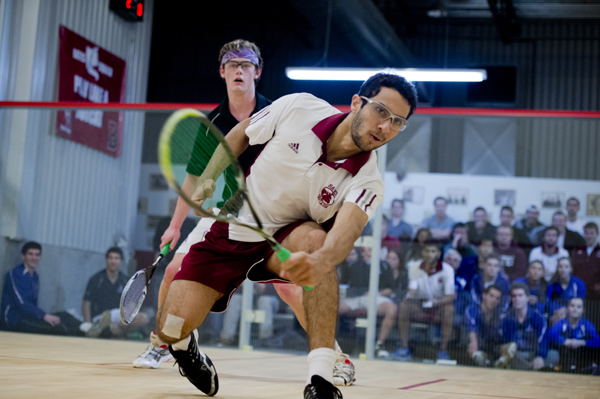 “Our squash program is among the most competitive in the country, and support from our alumni and parents will enhance the experience for our players while contributing to that excellent reputation,” said McHugh.

The squash center upgrades will be completely donor-funded, with Bates families contributing all of the $260,000 needed for the project, scheduled for completion in late October.

The addition of the sixth court, a refurbished U.S. Open Championship court from McWIL Courts whose glass walls give spectators a 360-degree view, will greatly improve the college’s ability to host tournaments, McHugh said. This significant gift will also fund a new team room and renovations to existing locker room facilities and spectator seating.

Avery and Allison Bourke, the parents of a senior squash player and lead donors to the project, emphasized the relationship between excellence in campus facilities and excellence in student performance.

Trustee and fellow lead donor Christopher Gorayeb ’80 put it simply. “As alumni, we should recognize an obligation to assist Bates wherever there is a need. I am happy to do so with this project.”

Also making a significant philanthropic contribution to the project are the families of Walter and Kim Cabot P’11, P’13, P’17 and Marty and Nancy Cannon P’15.

For a program that already competes at an elite level — the women’s team was ranked 12th in the nation in 2014 and the men’s, 13th — “this gift is a game-changer,” said head coach Pat Cosquer ’97.

Cosquer said that the new court will improve tournament play at Bates considerably. Most of today’s college squash matches use a three-court system, where the No. 7, 8 and 9 matches are played on one court; 4, 5, 6 matches on a second court; and 1, 2, 3 matches on a third court. So host colleges with six courts can offer men’s and women’s matches simultaneously on three courts each.

Bates’ five-court setup, however, did not allow this efficient style of play, said Cosquer. By adding a sixth court, the squash program shortens match play by 90 minutes, giving students more time for other commitments.

“Our athletes train at a high level, but they are students first,” he said. “We’re always mindful of how much time we ask them to spend away from academics.”

Cosquer, who currently conducts squash camps in Connecticut, Massachusetts and New Jersey, says that the new court will make it possible to host on-campus youth tournaments and camps, programs that can make valuable connections with potential Bates students.