A few months ago, Annakay Wright ’17 was touring a Chase Hall space that was dingy and unremarkable — except for the fact that it was going to be the Office of Intercultural Education’s new campus home.

“I walked around this space, and, well, it was kind of horrible,” she recalls with a laugh. “I thought, ‘How are we going to fit the OIE in here?'” 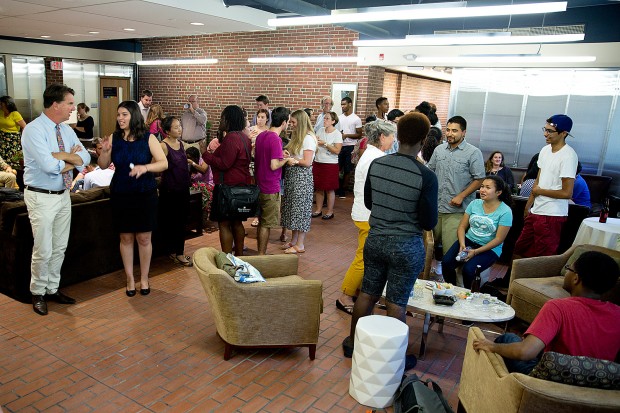 Guests attends the Sept. 3 reception for the opening of newly renovated space in Chase Hall for the college’s Office of Intercultural Education. Down the corridor seen at top right is another set of spaces. (Phyllis Graber Jensen/Bates College)

Once part of dining Commons, the 4,300-square-foot space had been left fallow when the dining operation left Chase for new Commons in 2008.

As Wright, who’s from Brooklyn, N.Y., walked through the raw space with a group of students, staff and architects, she came to a row of windows overlooking a busy patch of Bates earth.

“I looked through these dusty windows and saw the Library Quad,” she recalls.

Suddenly, imagination took over, as Wright saw her future self in the space, hanging out with friends while looking out the windows. 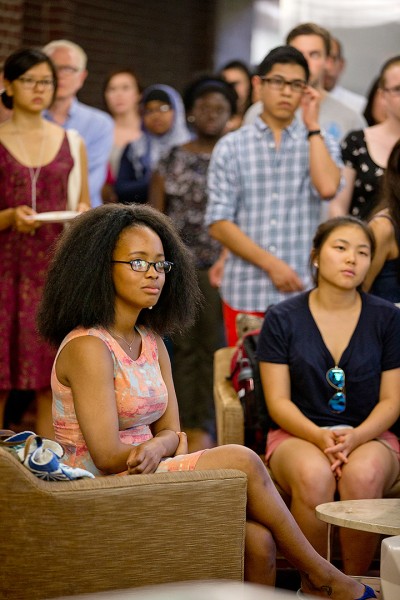 Nolwazi Ngwenyama ’16 of Mbabane, Swaziland, listens to a speaker at the reception for the opening of the Office of Intercultural Education’s new home in Chase Hall. She’s an OIE Fellow for 2014-15. (Phyllis Graber Jensen/Bates College)

Since then, a complete makeover has transformed the once-humble Chase space. What Wright and others imagined that day — a neighborly, see-and-be-seen aesthetic — was on full display at a gala reception last month to celebrate the Office of Intercultural Education’s new digs.

At that reception, the rhetoric, both from college leaders like President Clayton Spencer and Chief Diversity Officer Crystal Williams as well as from students, spoke of a new resolve for the college’s work on diversity and inclusion.

To President Clayton Spencer, the new space feels hip and fizzy like the offices of a Silicon Valley startup. (With all that exposed Lewiston brick, we prefer “East Coast startup.”)

“And what is that kind of space about?” she asked the reception crowd rhetorically. “Creativity. It’s about energy, it’s about who happens by and throws their energy and ideas into the mix. It’s about being welcoming and porous. It’s a quintessentially active, flexible space.”

Sleek yet inviting, the new space was designed by Canal 5, the firm that reworked the Bobcat Den a couple years ago. At Bates, project manager Paul Farnsworth oversaw the undertaking.

Depending on your Bates era, you may recall the old space as the low-ceiling or small room in Commons. Or, the space — part of a 1978 addition to the building — may predate you altogether.

Mostly facing the Gray Athletic Building, it runs nearly the length of Chase’s east side. Some of it, as Wright noticed, overlooks the Library Quad. 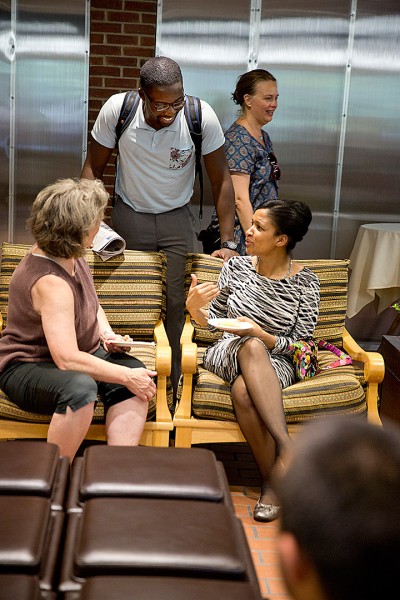 The new layout features four offices for the professional staff and three meeting rooms, two small and one large. There are two large social spaces connected by a wide hallway, one being the “study bar” that Wright envisioned overlooking the Library Quad, and the other a family-style social space. This being food-crazed Bates, there’s a kitchen. And along a new access corridor into the office are three new prayer rooms.

Several students, including Teddy Poneman ’15 of Larchmont, N.Y., past co-coordinator of OUTFront, spoke at the reception.

At Bates, Ponemon says he’s been “surrounded by amazing people who have transformed me. This space will continue that across the campus in macro ways: to engage the entire community to take action around our mission statement — ‘the transformative power of our differences.’”

Charged with supporting and strengthening diversity and inclusion efforts, the OIE’s success, as you can imagine, might depend as much on having the right space as the right programming and staff.

“Catalyze areas and people on the campus.”

Regarding the latter, the office is headed by Crystal Williams, the college’s chief diversity officer as well as an associate vice president and professor of English. She’s been joined by a professional staff of four.

Williams told the gathering that with the opening of its headquarters, the OIE is ready to do some hard work. Specifically, her team will set out to “catalyze areas and people on the campus who have not felt that the work [of diversity and inclusion] is their work.

“Our intention is to help build a culture at Bates that suggests that not only is the work of ensuring that everyone feels included, valued and served being done here, but that this is an institutional norm. It is the standard, and that anything outside of that is the exception. That is the work that we are setting for ourselves.”

Josh McIntosh is the college’s dean of students and vice president for student affairs, and after Williams gave him a tour of the new space, he saw how architecture could “facilitate progress” in diversity and inclusion.

Bates need spaces, he says, to foster community for “students who have been on the margin of nearly every educational system in this country.” Bates needs to support student success, especially for first-generation and low-income students. And then there’s the imperative to “educate the community about why diversity and inclusion matters.”

In the new OIE spaces, he saw a spectrum of potential student experiences, from “study, focus, academics, don’t do Facebook” and family-room living to “reflection, deep-thought and learning work.”

“I’ve never seen it, and that’s not an overstatement or hyperbole.”

The OIE’s prior home was a wood-frame building on Campus Avenue that was razed over the summer, along with several other buildings, to make way for two new student residence halls.

The coming infusion of student life right across the street from OIE headquarters makes its location even more student-friendly. 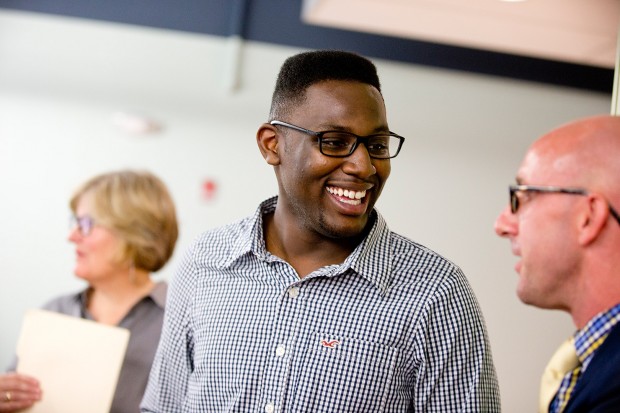 Jalen Baker ’16 of Lancaster, Texas, talks with Dean of Students Josh McIntosh during the reception celebrating the new home of the Office of Intercultural Education. President Spencer is in the background. (Phyllis Graber Jensen/Bates College)

For Williams’ part, she says she’s “never in all my travels seen an intercultural center in the middle of campus, one with study space, social space, learning and office space, and open space. I’ve never seen it, and that’s not an overstatement or hyperbole.”

The singular nature of the space, she said, indicates Spencer’s “commitment to Bates values and principles with regard to inclusion and diversity.”

The event’s final insight was lofty, and it came from Jalen Baker ’16 of Lancaster, Texas, a member of the OIE’s student staff and officer in the Bates Christian Fellowship.

The OIE’s work, he said, helps “students to leave Bates not only with world-class talents, but also as world-class people who contribute to the betterment of their communities so we can all live in a better world.” 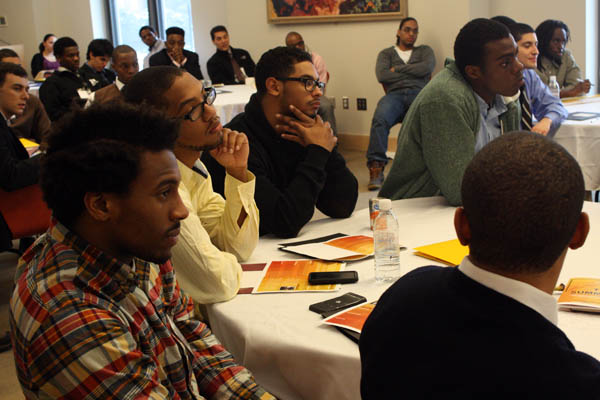