Multimedia: Featuring detritus that delights us, the Trashion Show is a model of recycling

The lure of high-end trashion and delightful desserts is irresistible to many, as evidenced by the energetic crowds that gathered in the Gray Athletic Building on Nov. 19 for the ninth annual Trashion Show — an event that raises awareness about sustainability through a fashion show featuring outfits made from recycled materials. 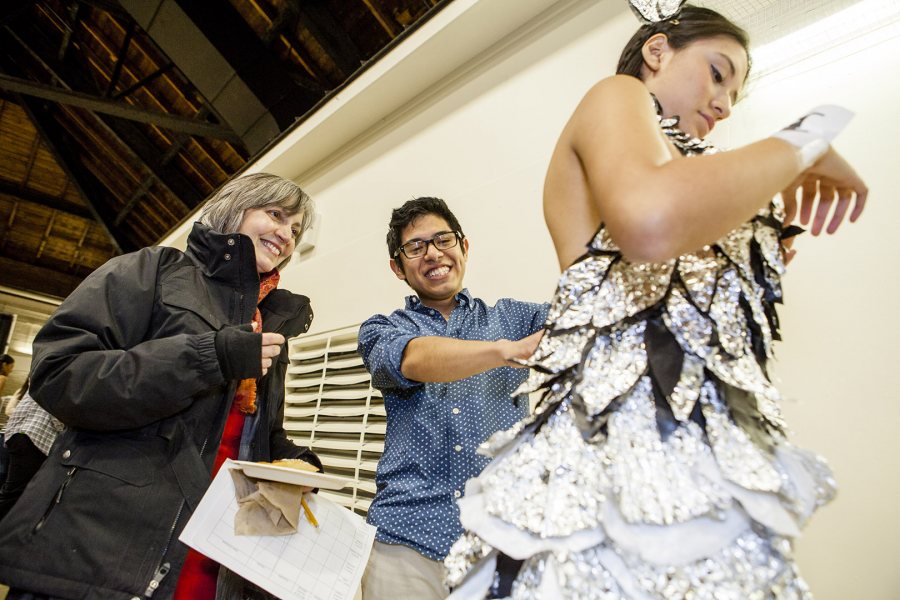 Contestants vied for awards in four categories: Most Creative, Fabulosity, Most Glamorous and Thanks for Participating.

With electronic music blasting in the background, students, faculty, staff and community members walked around with desserts in hand awaiting the announcement that would kick-start the show.

Megumi Milla ’16 of Roslindale, Mass., was the first to walk the runway, adorned in an elegant dress with a flowing tail made out of aluminum foil that reflected the throbbing, colorful stage lights. Milla’s foil dress was designed by Kevin Tejada ’17 of Mount Kisco, N.Y., returning from last year’s Trashion Show.

Tejada’s creation was named Most Glamorous. The foil dress idea, he said, came to him from observing how much aluminum foil was thrown out each time his mother baked something.

Even more daring was an outfit created by the Environmental Coalition and modeled by Madeleine Lachevre ’18 of Milton, Mass., a spherical skirt made from used paper cups. The model sipped pointedly from one of the old recyclable Bates mugs, a sustainability program abandoned because the community was not returning the mugs.

Despite the awkward walking imposed by the spherical skirt, Madeleine’s outfit was named Most Creative.

Maitri Chittidi ’17 of Nashua, N.H., modeled for the Bates Democrats, a group that one might not associate with fashion. Her outfit, made from campaign material from the recent election, featured Michael Michaud and Shenna Bellows posters.

The Bates Democrats shared the Fabulosity award with Elena Ray Clothier, Bridget Kahan and Raines Seeley, daughters of Bates faculty and staff. Their harmonious outfits were created from bright blue and yellow plastics, candy wrappers, Boston Globe newspapers and a year’s worth of Chobani yogurt lids.

The Bates EcoReps, students charged with raising sustainability awareness and implementing green campus projects, demonstrated how to drain the dregs from recyclable plastic cups as part of a semester-long campaign intended to reduce the number of cups that can’t be recycled because there’s still liquid in them.

In attendance at the show, President Clayton Spencer commented that the event was “brilliant and creative,” and engaged with a “serious subject in a lighthearted way.”

Julia Riback ’16 of Albany, N.Y., and Becky Culp ’15 of Norwalk, Conn., EcoReps who organized the Trashion Show, characterized it as a “fun and creative way to raise awareness about sustainability at Bates.”

An enthusiastic Julie Rosenbach, manager of sustainability initiatives at Bates, added that the show is effective because it “engages different people from different perspectives” and allows participants to “have fun with trash.”