When it comes to the Trashion Show, it’s better to ask “what you can make with the trash, rather than what the trash can make for you,” says Danielle Meng ’20 of Beijing.

That approach paid off for Meng. The outfit she designed for model Claire Deplanck ’20 of Kuala Lumpur won first prize in the annual show, in which students make runway-ready outfits out of campus trash.

The Trashion Show, organized by student EcoReps and held in the Gray Athletic Building on Nov. 20 during the pre-Thanksgiving Harvest Dinner, highlights the amount and variety of waste the campus produces.

Not that you can necessarily tell that the outfits are trash-couture. Before and after the show, models and designers happily posed for portraits by Bates photographer Theophil Syslo and shared the creativity and philosophy behind their creations. 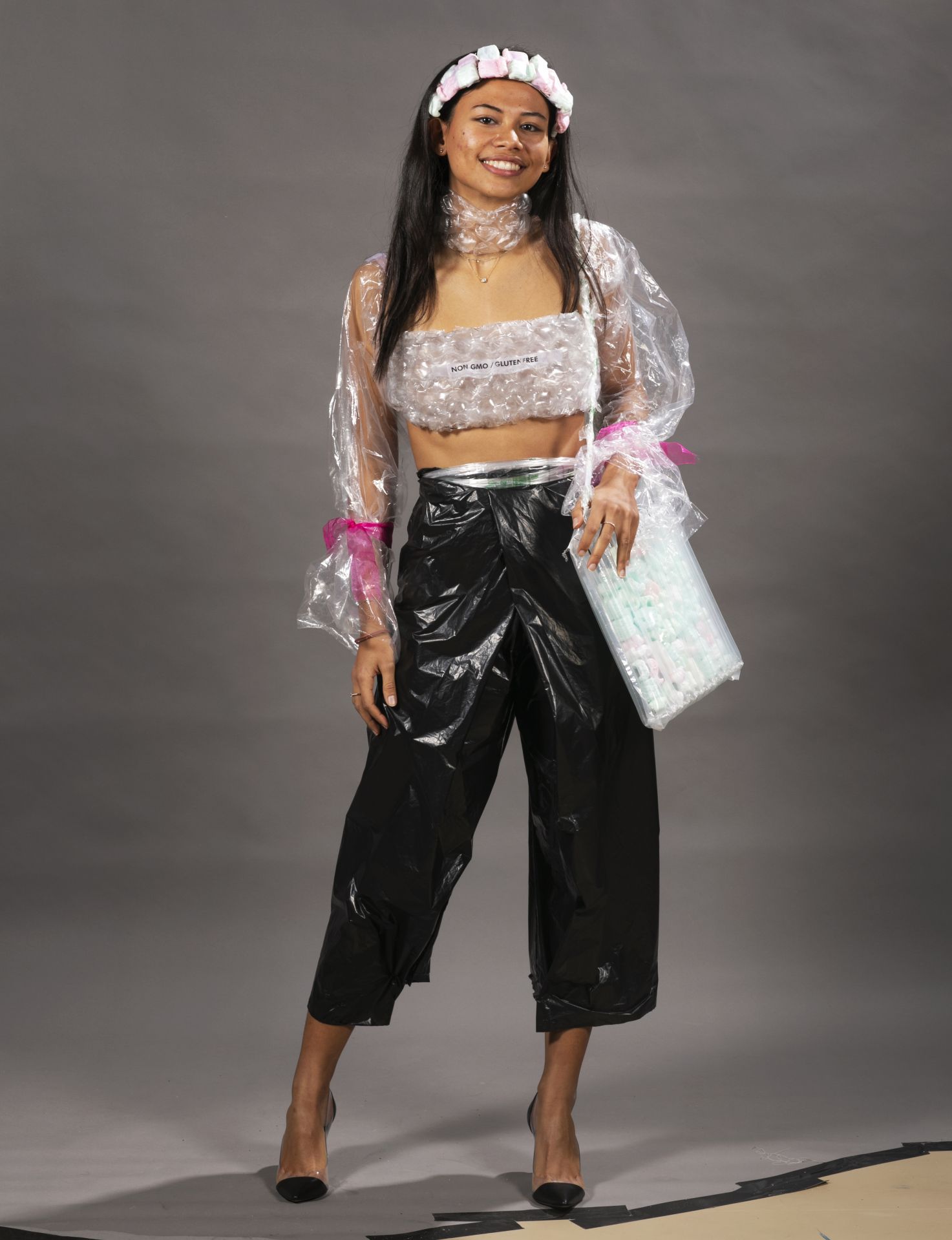 Creative Use of Trash: Tiara made from packing peanuts

The Designer Says: “I personally do a lot of online shopping and buy a lot of stuff, and I feel bad about the packaging and the cardboard and the tape and everything I waste. I feel like that definitely could be improved.” 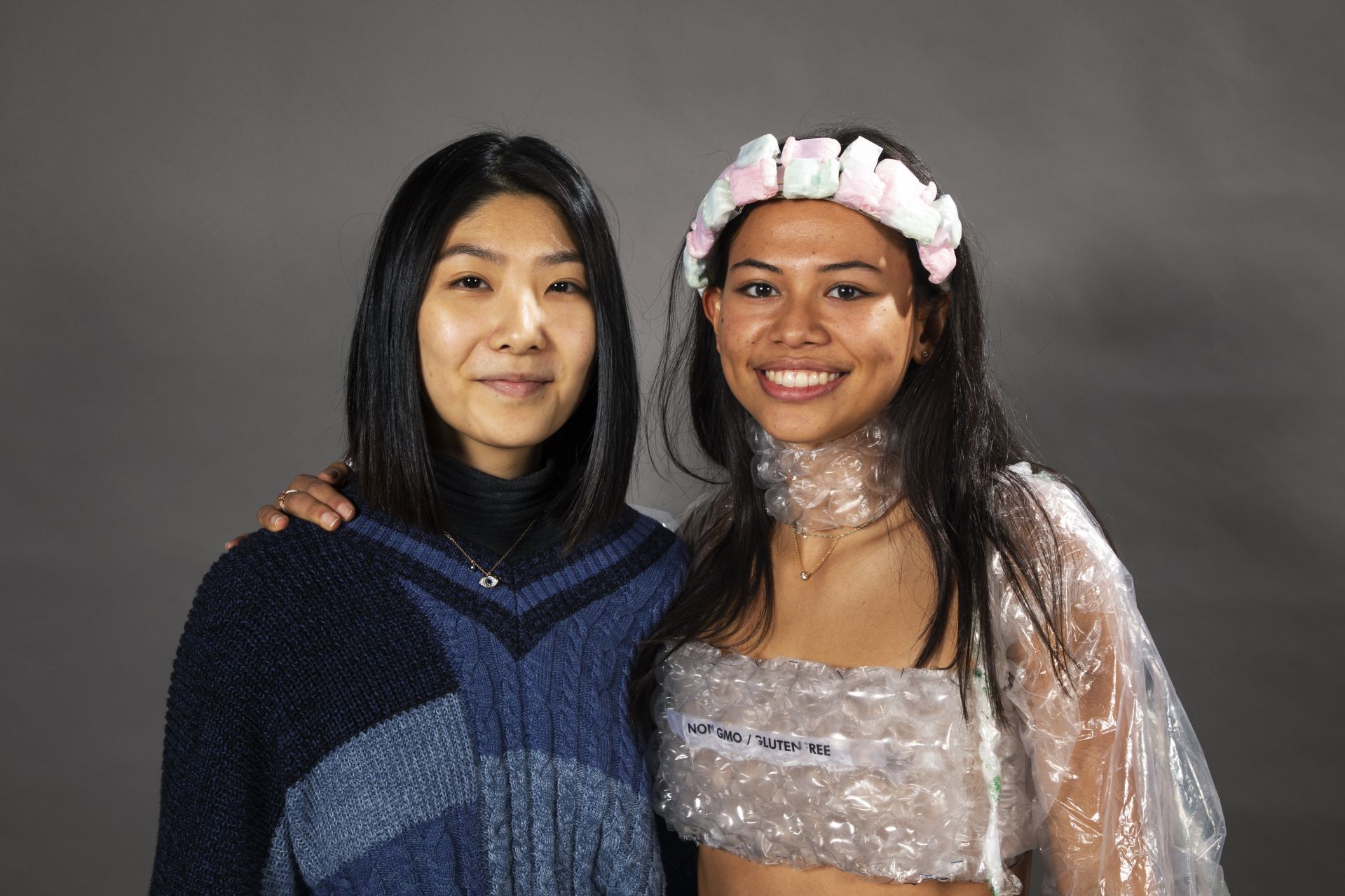 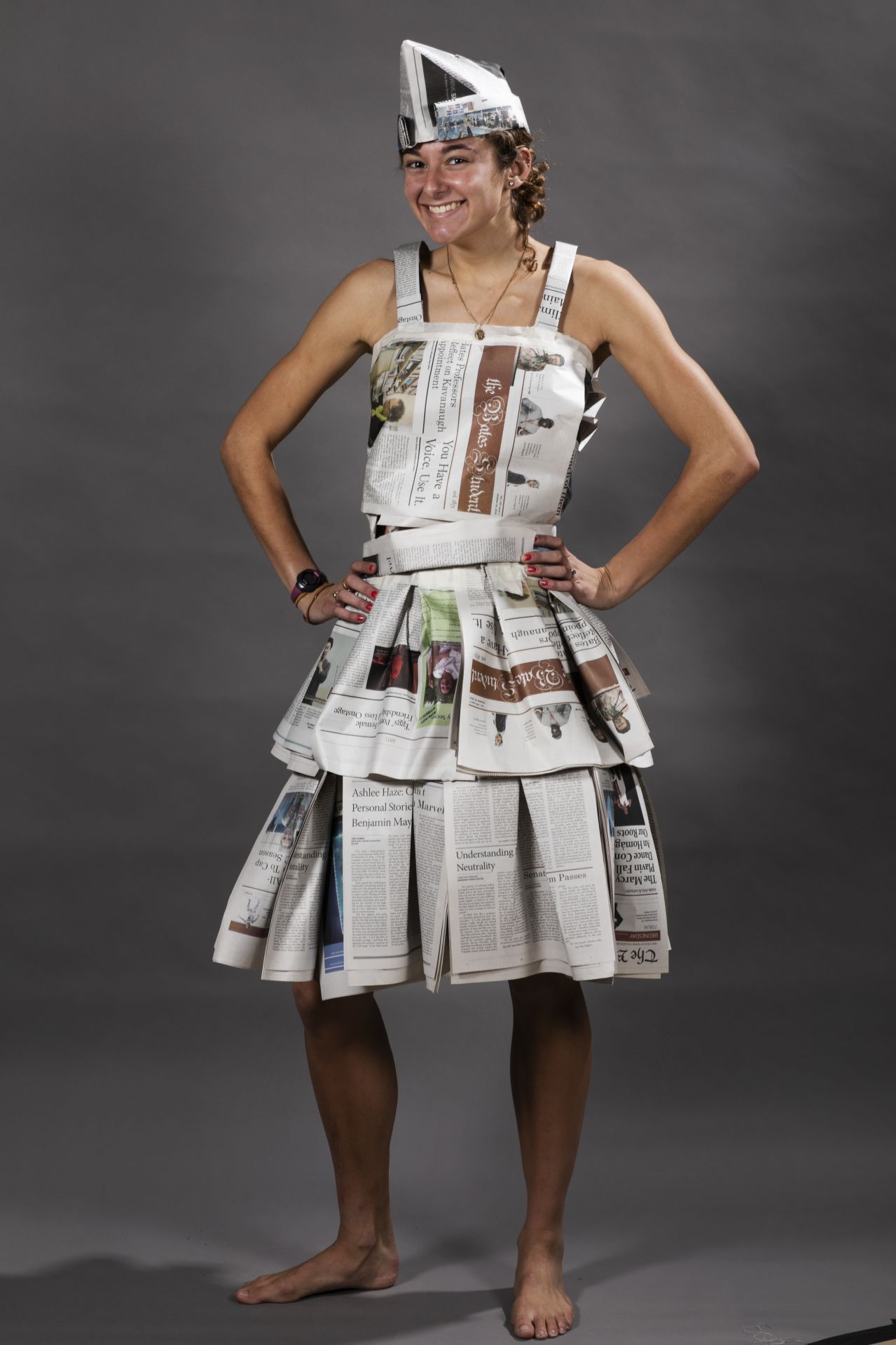 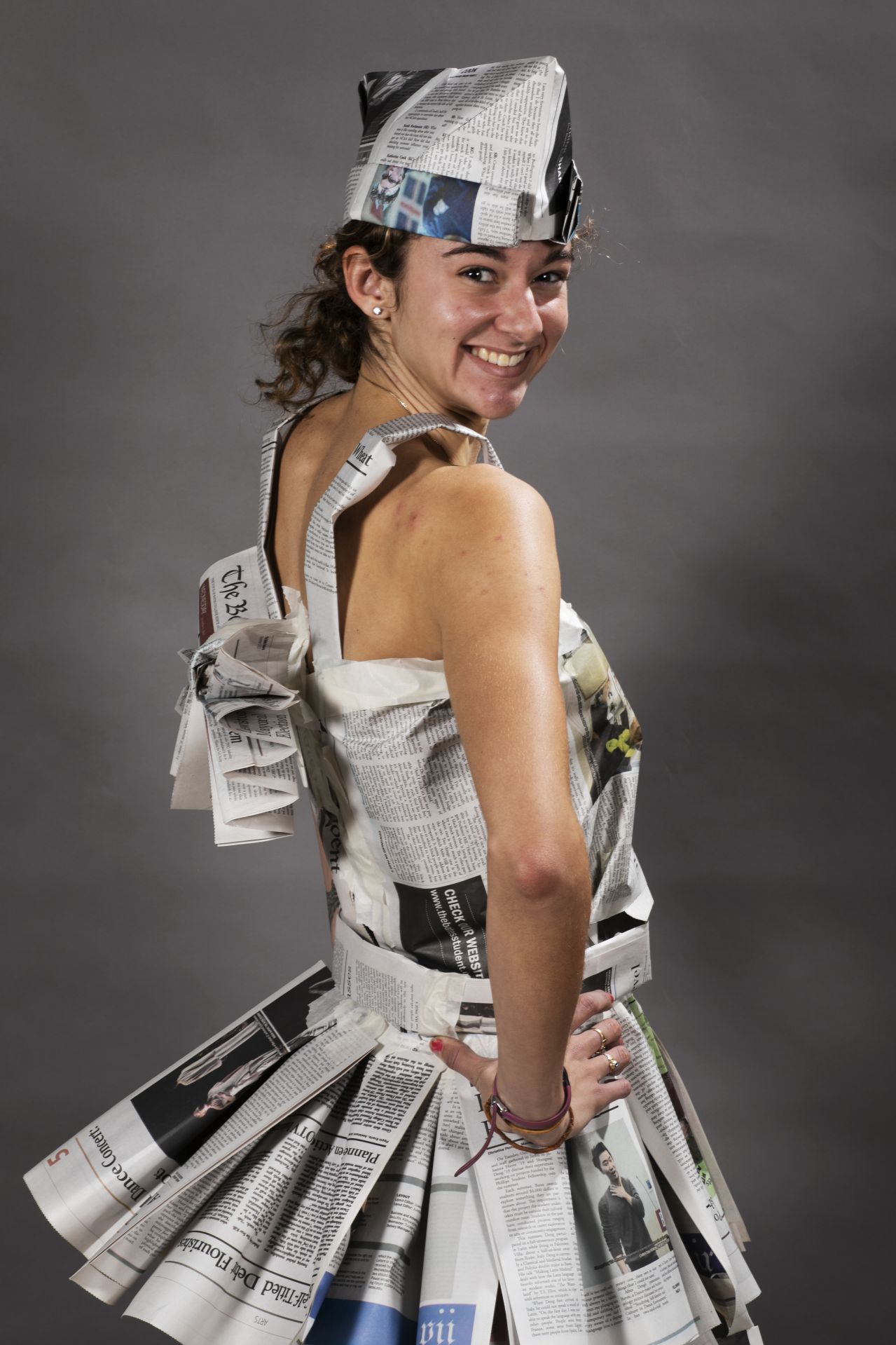 Signature Trash: Back issues of The Bates Student, and tape

Assembly Time: About 10 minutes, on the day of the show

The Designer Says: ”Anything can be repurposed,” says co-designer Olivia LaMarche ’20 of Lynnfield, Mass. “Sometimes it’s worth saving things.” 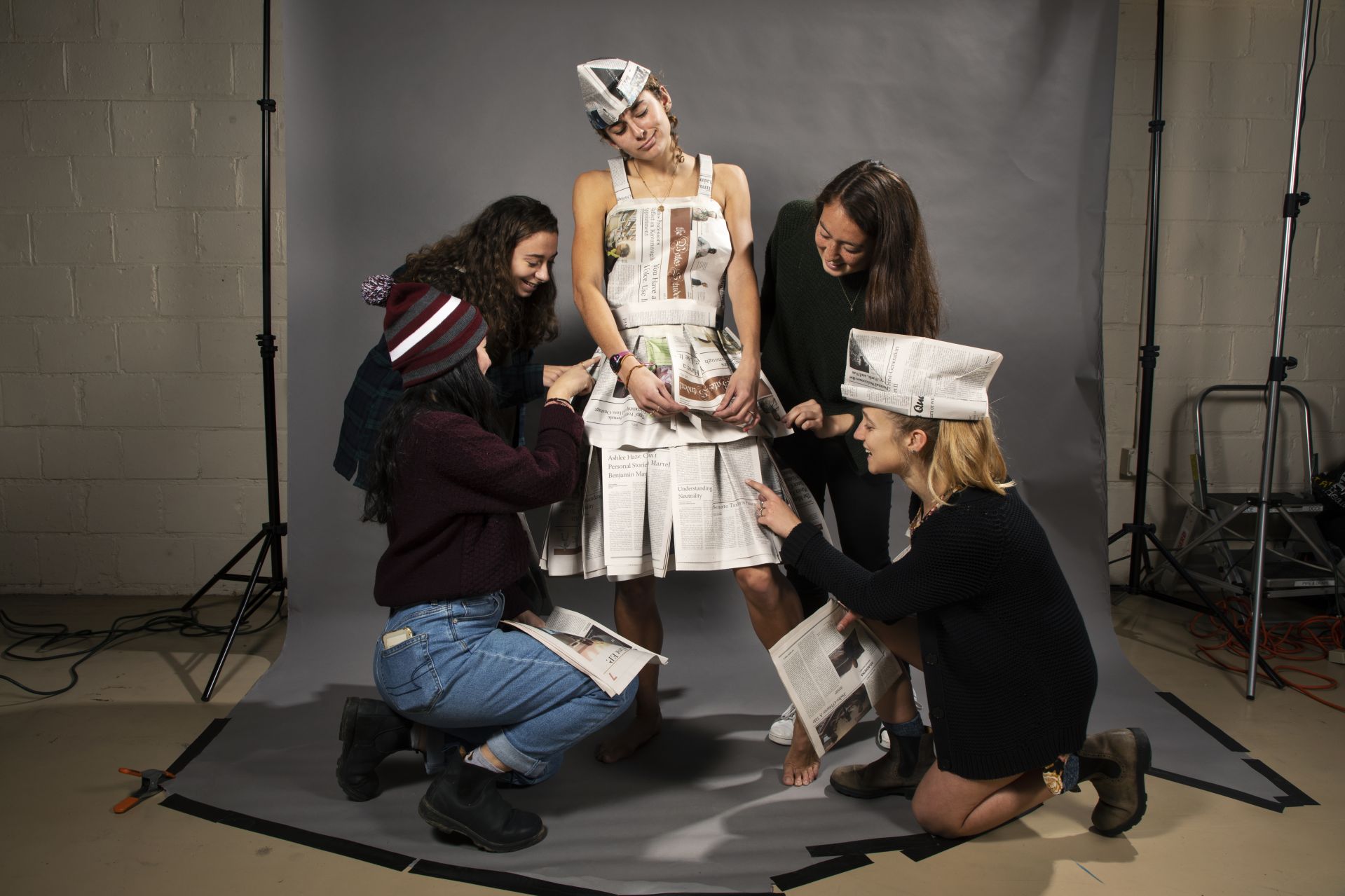 Elise Lambert ’22 gets “read” by teammates on the women’s track and field team, who designed the outfit.

Suited to a Tea 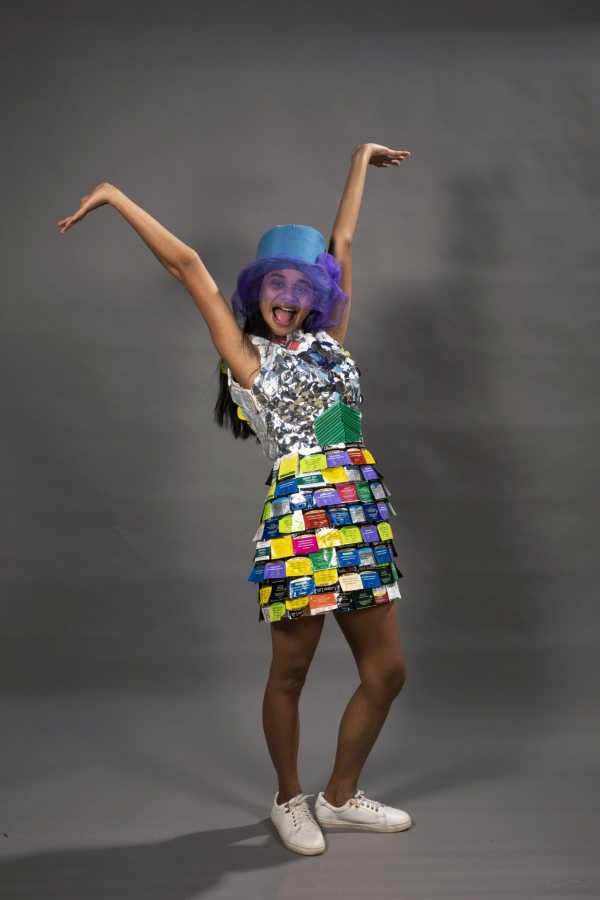 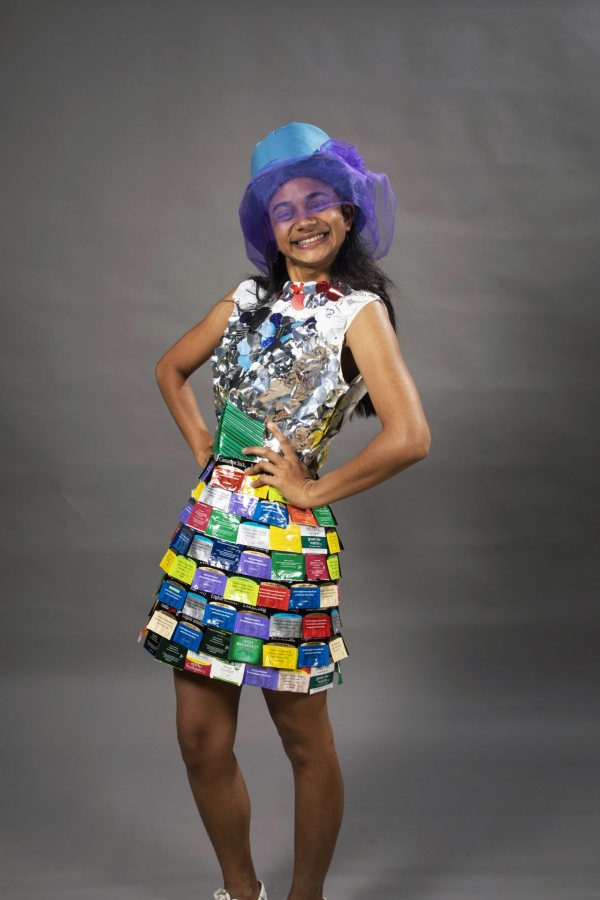 Creative Use of Trash: Skirt made of teabag envelopes, partly from Commons and partly from the Olin Arts Center costume shop’s 2:30 p.m. tea-times. 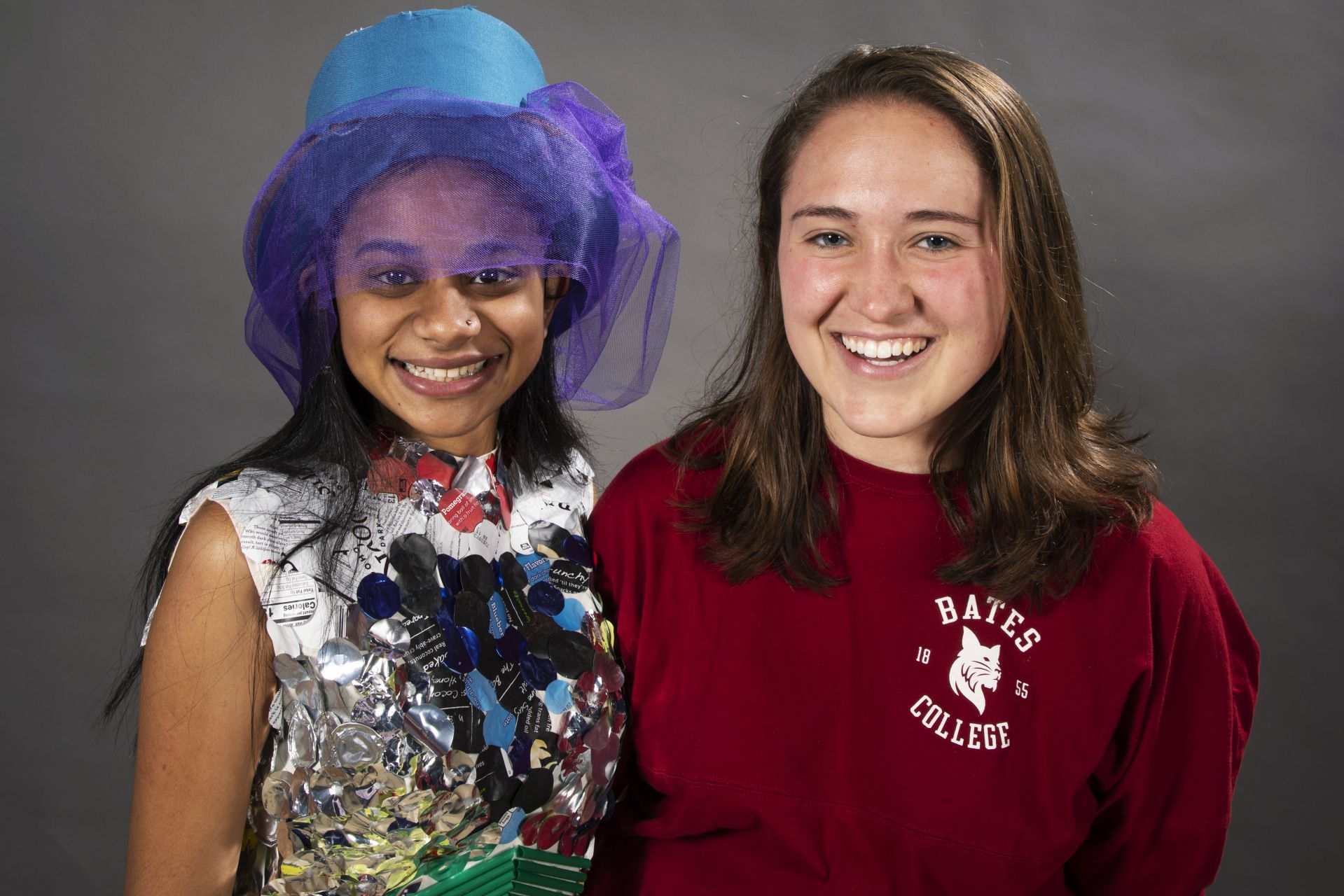 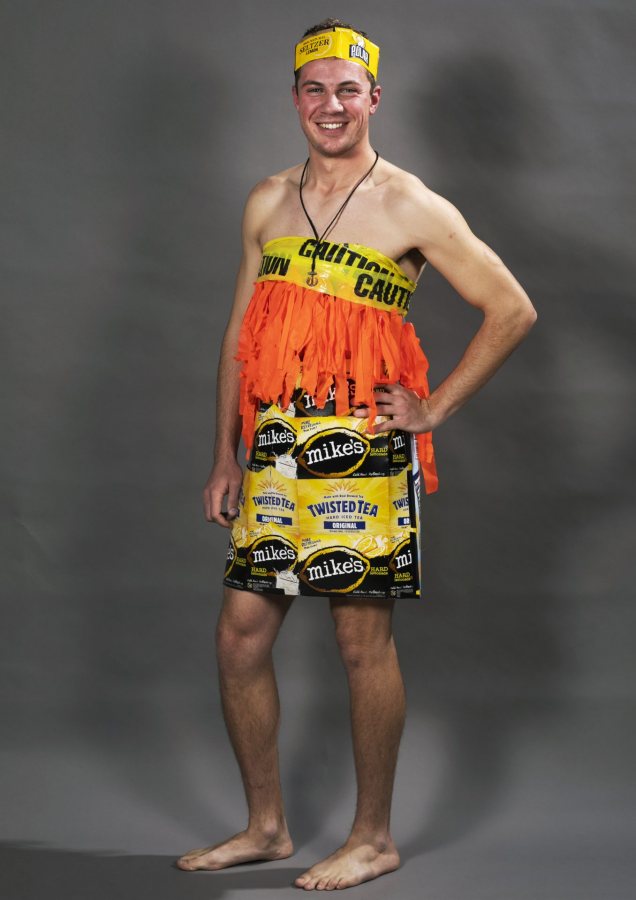 Creative Use of Trash: Yellow caution tape collected after Back to Bates Weekend

The Designer Says: “Sort your recyclables and your trash!” 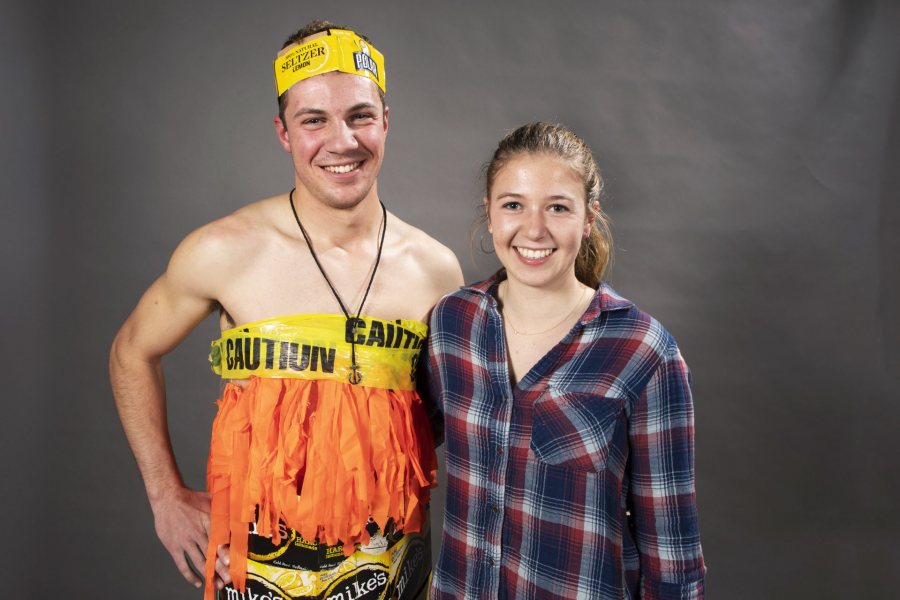 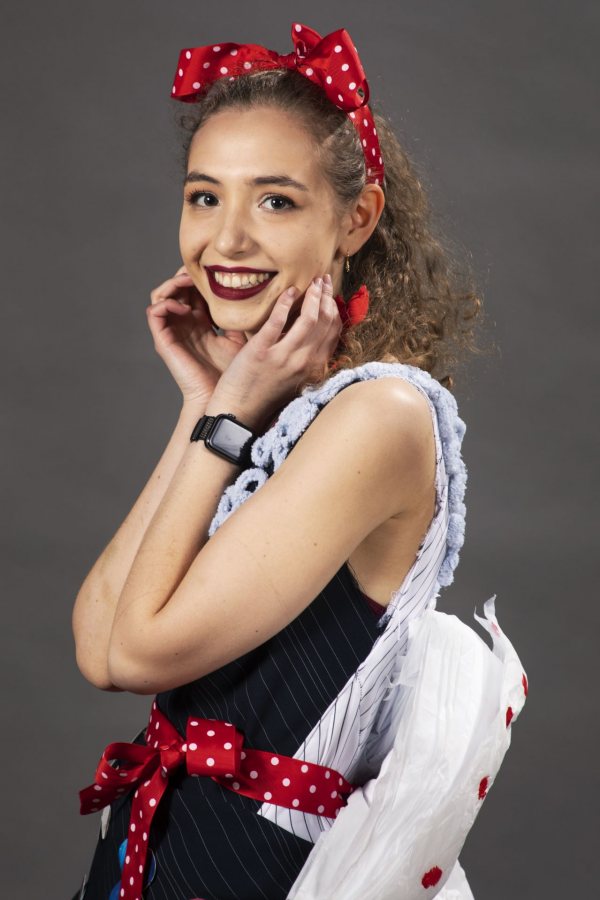 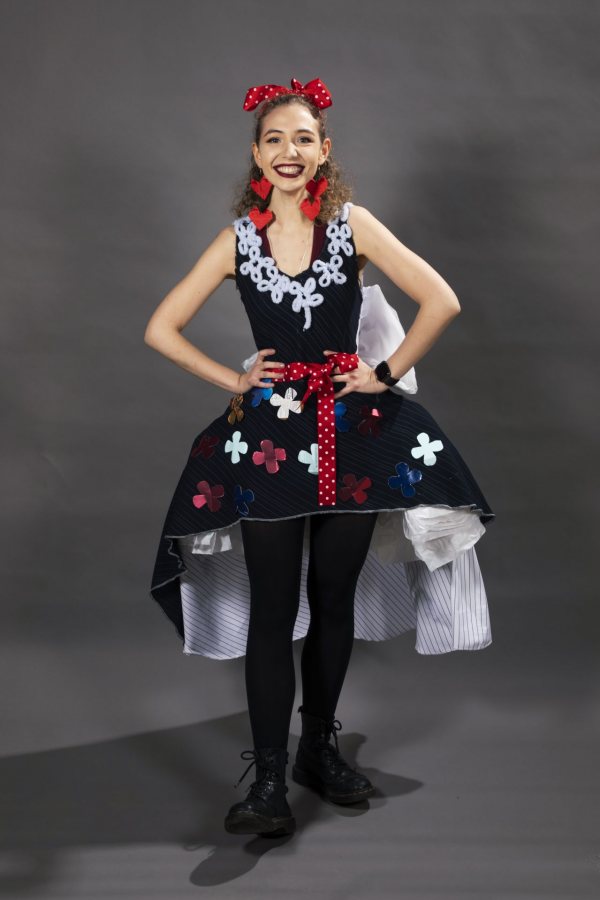 Creative Use of Trash: Layers of tissue paper in the skirt, collected from packaging over the course of a month

The Designer Says: “Tissue paper is super wasteful. If you buy two items, they give you so many of those tissue papers. It’s not necessary.” 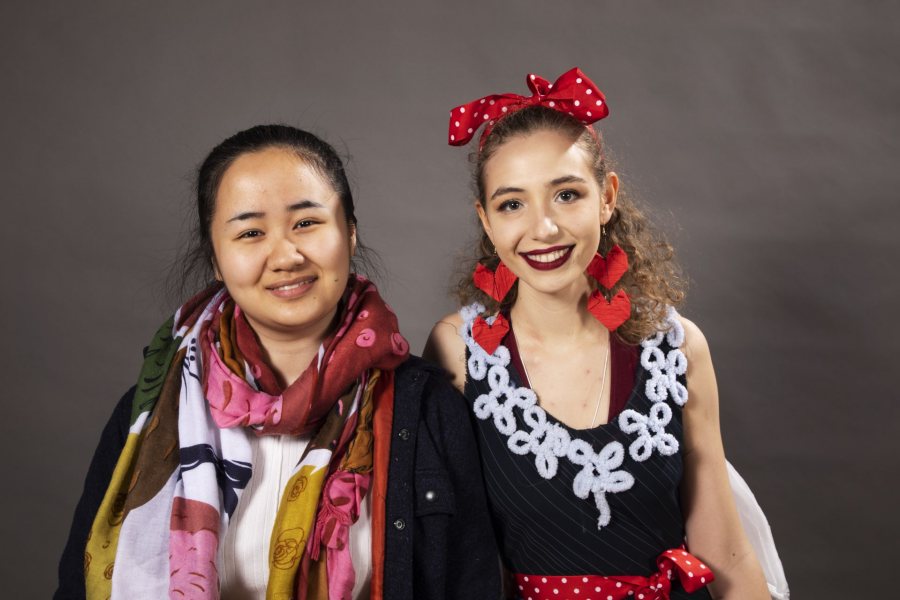 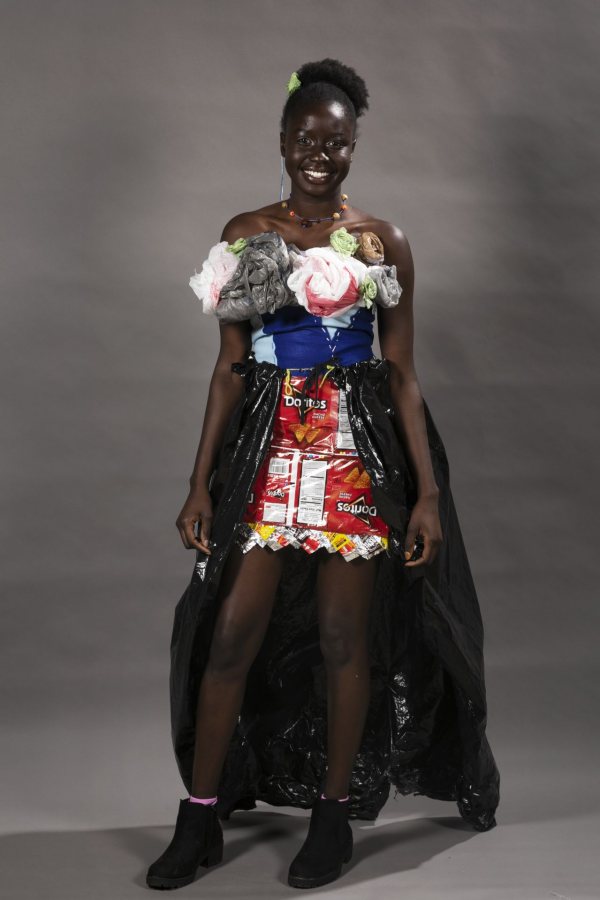 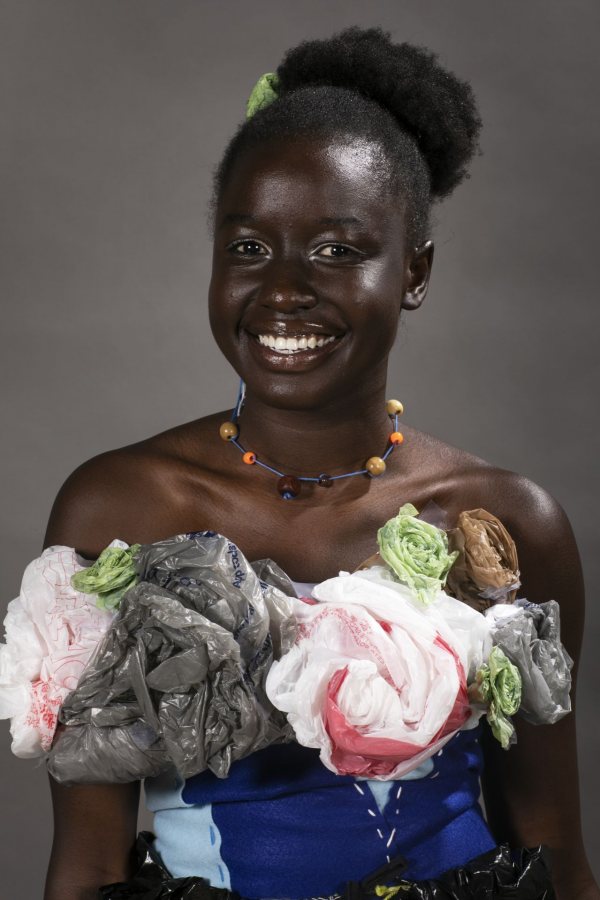 Creative Use of Trash: Flowers made of plastic bags from Wal-Mart

The Designer Says: “Bring reusable bags for shopping,” says Chuah. ”A lot of plastic bags are being shipped to other countries — cough cough, Malaysia, cough cough.” 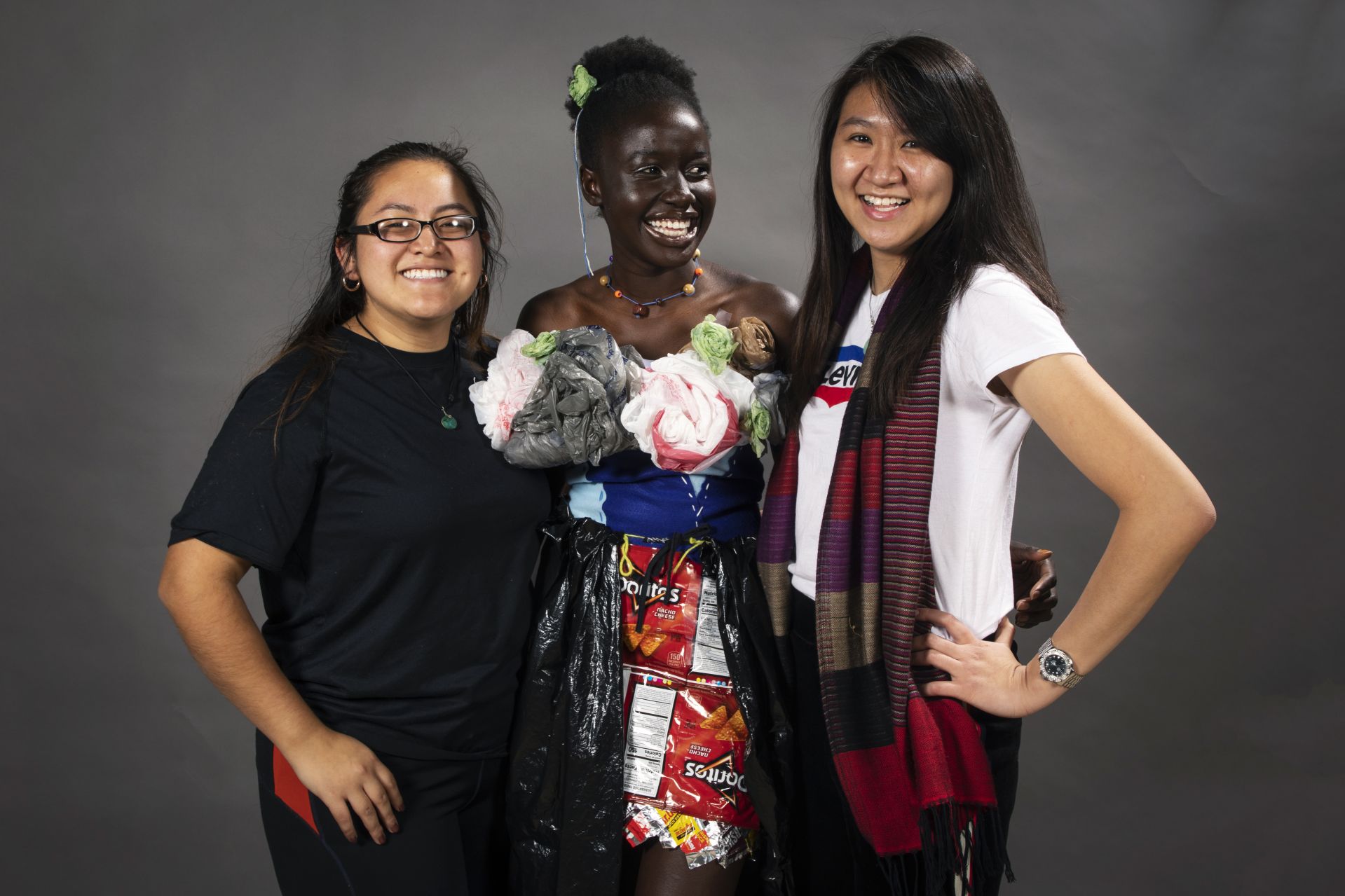 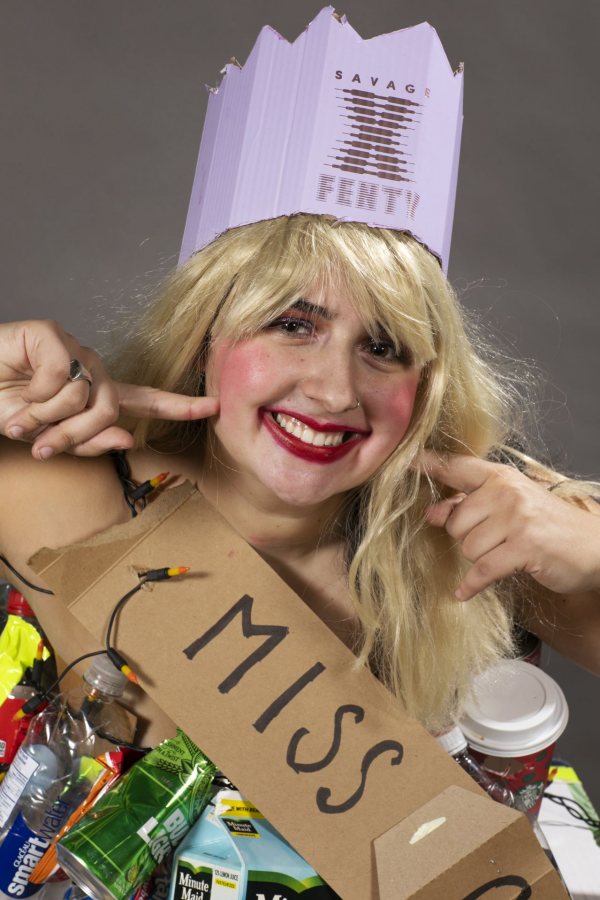 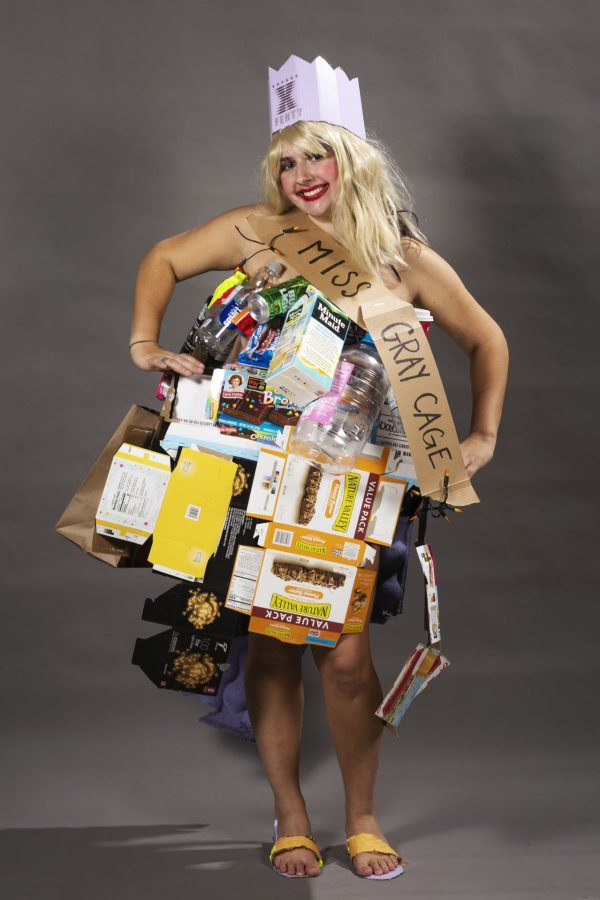 Creative Use of Trash: A wig that was thrown out after Halloween

The Designer Says: ”Anybody can be Miss Universe if they try hard enough — or Miss Gray Cage.” 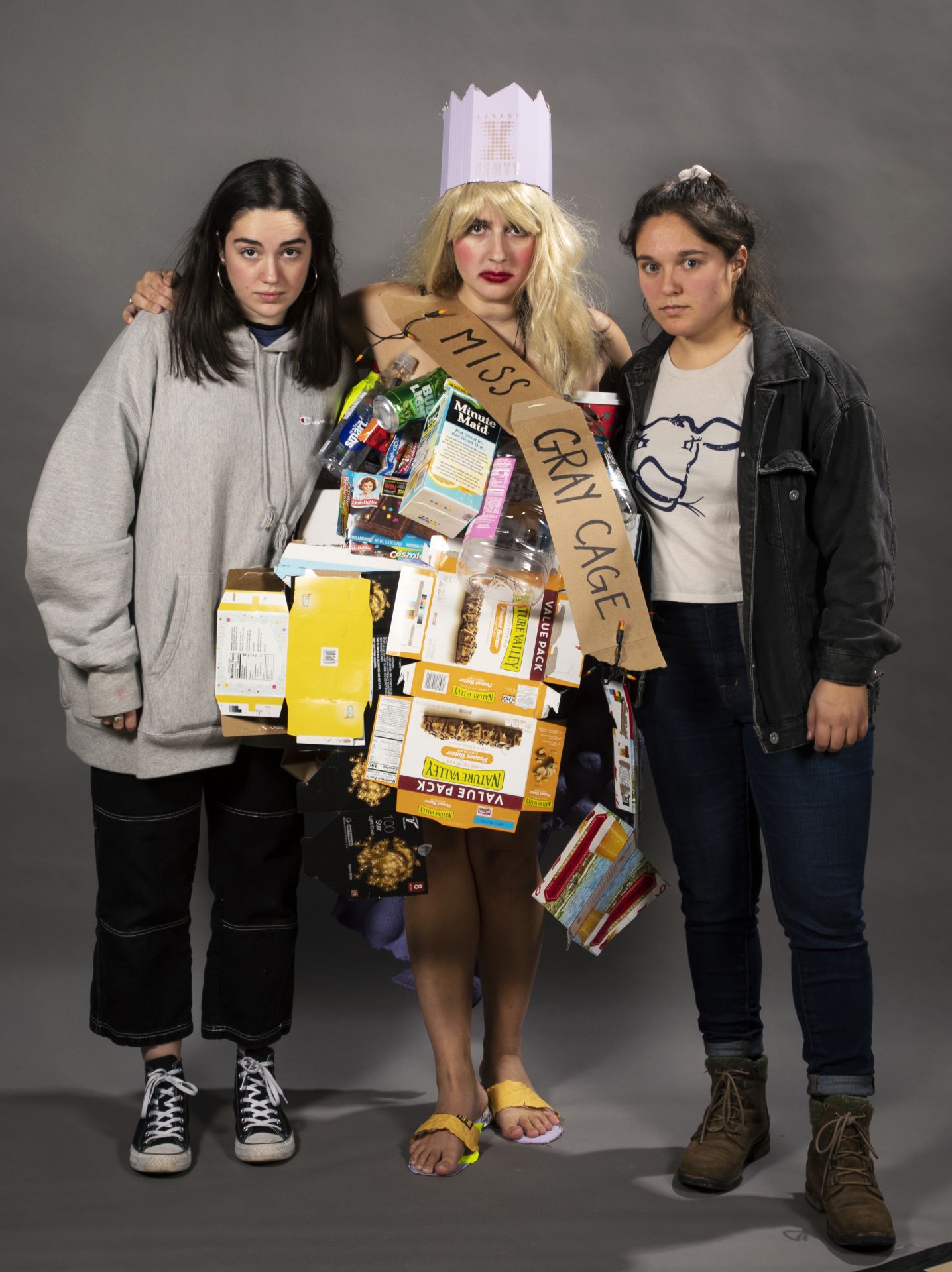 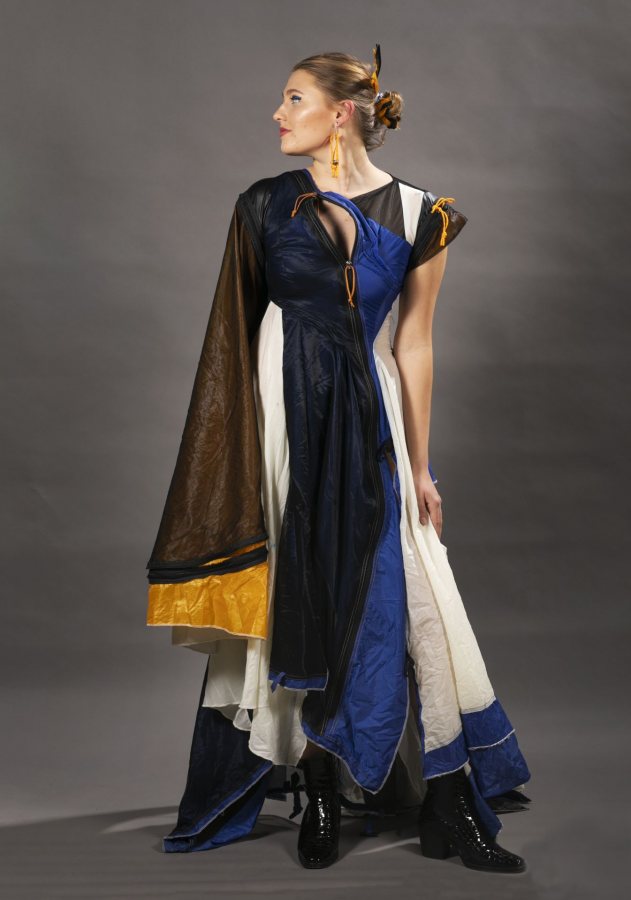 Talia Sperduto ’21 of Canterbury, N.H., models her own design.

The Designer Says: “We talk about trash as the plastic bottles that we use and the plastic that we get in Commons, but we forget about textile waste.” 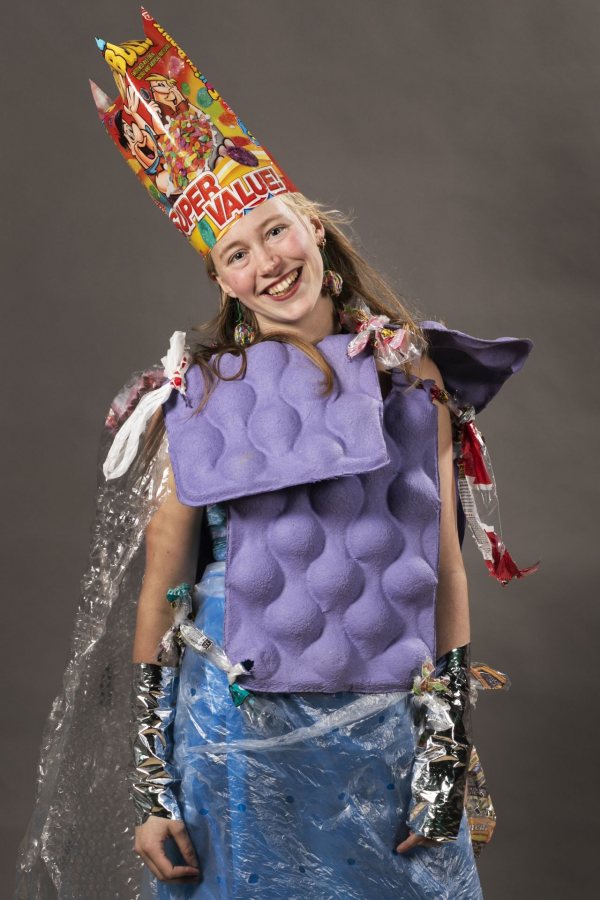 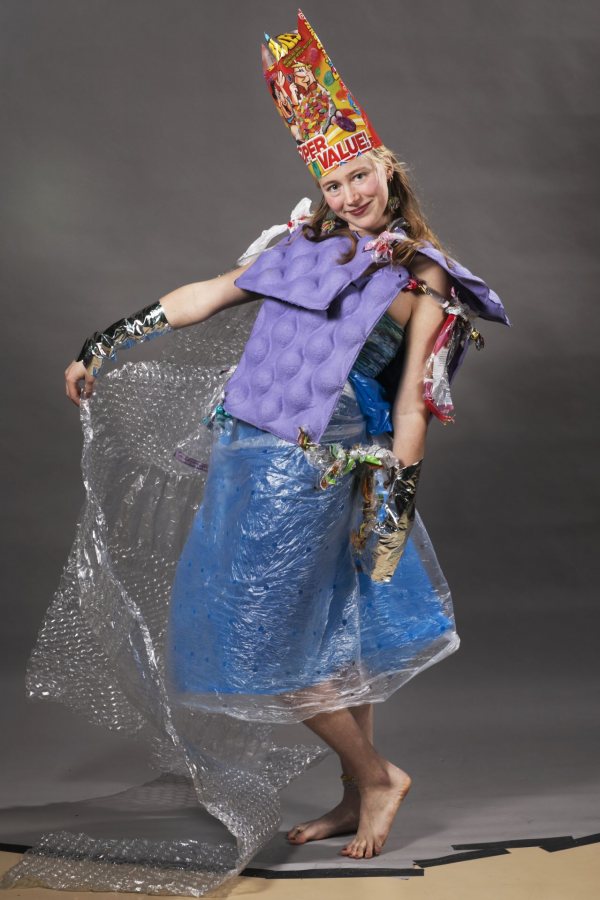 Creative Use of Trash: Bubble-wrap cape

The Designer Says: ”The amount of trash that Commons goes through in order to feed all of us is tremendous, and the amount of waste that we produce on top of that is a lot,” says co-designer Elly Beckerman ’22 of Washington, D.C. 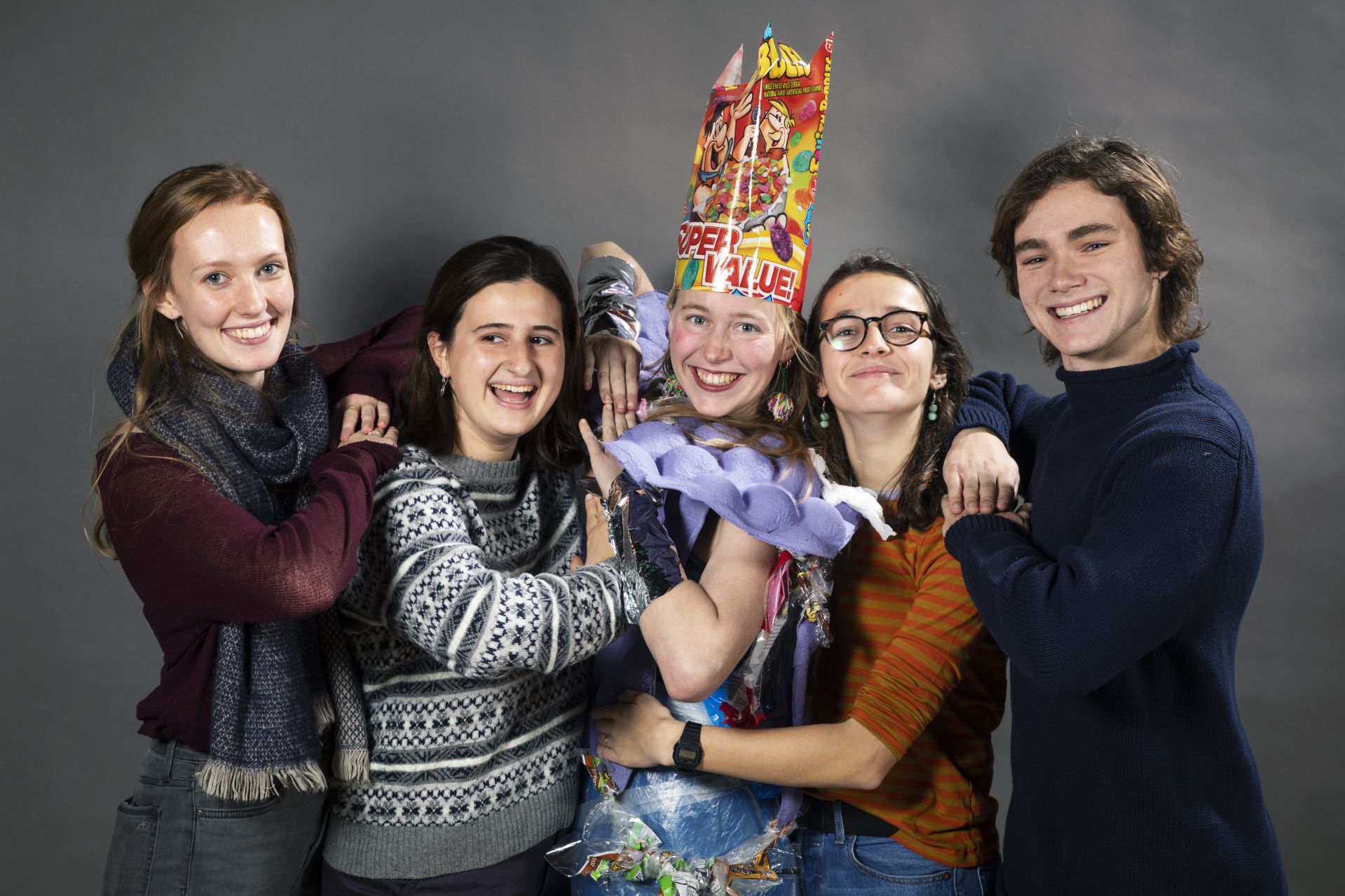