Photographing MLK in 1964, George Conklin ’53 focused on the final frames

This black-and-white photograph shows Martin Luther King Jr. speaking at an interfaith rally at San Francisco’s Cow Palace in May 1964.

A beam of light illuminates King at the podium, as if conferring a celestial blessing. George Conklin ’53 remembers the scene well. He took the photo. 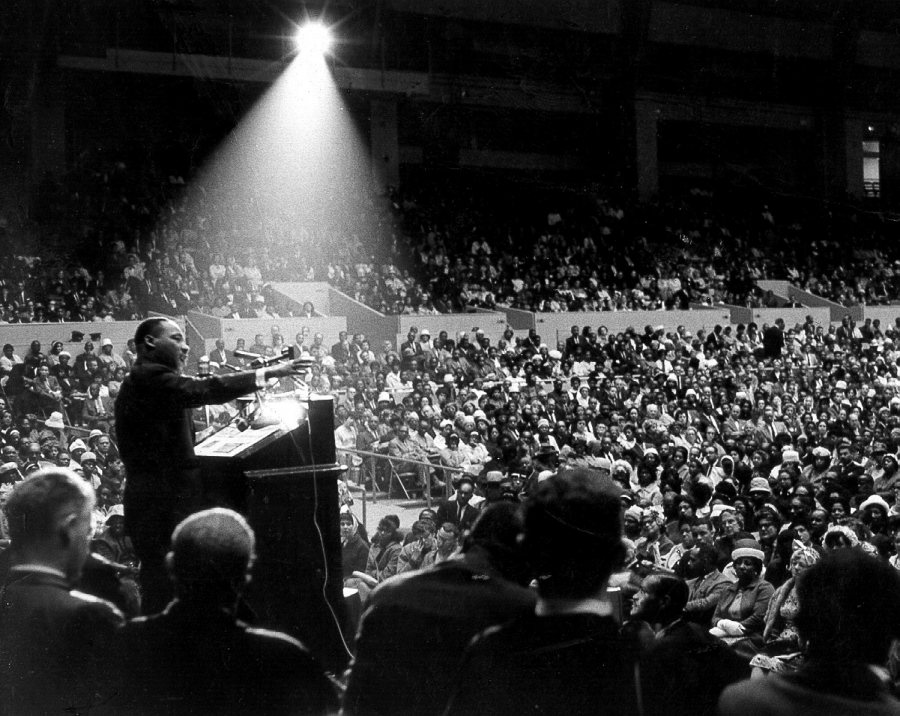 The Rev. Martin Luther King Jr. speaks at an interfaith rally at the Cow Palace in San Francisco on June 30, 1964. (Photograph by George Conklin ’53)

In 2013, Conklin and his photograph received a DeRose-Hinkhouse Memorial Award from the Religion Communicators Council, a national interfaith association.

The award recognizes the photo’s installation at San Francisco’s McLaren Park, overlooking the Cow Palace. Engraved on a stone, the photo is part of a “musing station” on the park’s new Philosopher’s Way.

In 1964, Conklin, an ordained United Church of Christ minister, was communications director for the Northern California Council of Churches.

He was photographing King’s appearance using Kodak Tri-X, the go-to film of the day for photojournalists who prized its high speed — meaning they could shoot in difficult, low-light conditions without a flash.

And that’s what Conklin was doing on the night of May 30, 1964. “The long evening wore on, the humidity in the vast hall increased and I could see the beam appearing. I got up and took the last frames of a 36-frame roll.”

“I often say, ‘Join the church and see the world.’”

In a sense, Conklin’s photography is part of his ministry. “I have expressed the ideas of action for justice and social change through my avocation of photography.”