Today,  Jan. 23, hundreds of Bates students will take turns making a quick dash onto and into Lake Andrews.

Yep, the Puddle Jump is upon us.

And while the origins of many student traditions are murky, the only thing unclear about the genesis of the Puddle Jump tradition, 40 years old this year, might be the famously turbid water of Lake Andrews. 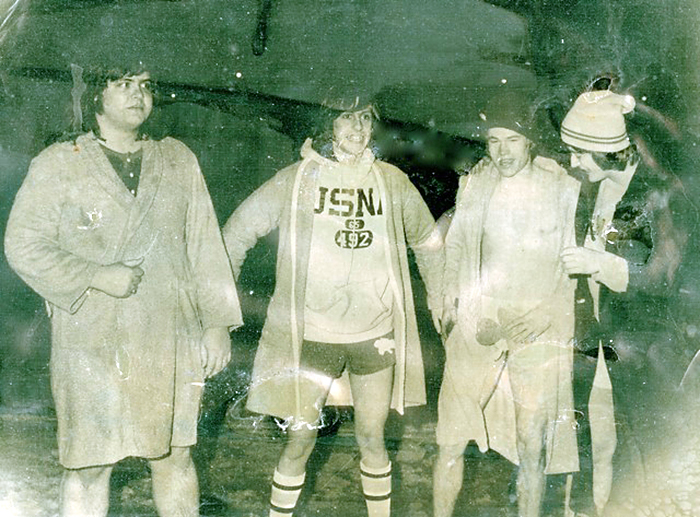 A story about the first Puddle Jump appeared in the March 27, 1975, issue of The Bates Student. That’s Mark Stevens ’77 in the photo.

The tradition has a crystal-clear provenance thanks to its attentive founders, Christopher Callahan ’78, Scott Copeland ’78, Lars Llorente ’78 and Mark Stevens ’77.

It all began in 1975, when the four cut a hole in the ice on Lake Andrews, donned bathing suits (a few, at least), and took a bracing St. Patrick’s Day dip.

It was all about “exuberance at the end of a hard winter,” according to Callahan.

Callahan was also influenced by the famous New Year’s Day swim by the L Street Brownies, they of South Boston’s Irish-Catholic community.

Like all impeccable logic of one’s college days, “somehow that inspired us to cut a hole in the ice and dip” on St. Patrick’s Day in 1975.

In a letter to Bates Magazine in 2010, Gary Grieve-Carlson ’77 recalls “watching those four lunatics laboriously chip away at that thick ice with a small hatchet and a large metal rod, long after the sun had set, from my room in Smith South.”

The Puddle Jump was a longtime mainstay of St. Patrick’s Day. There was a period of time when two dips took place, one in March and one during Winter Carnival week in January. In recent years, the January jump has taken over in a big way.

An article in The Bates Student of March 27, 1975, was prophetic: “This St. Patty’s Day dip will hopefully become an annual tradition, with more participants each year.”

A place in Bates’ “history of fun.”

How true. From four pioneers the jump will attracts hundreds tomorrow.

The annual jump is run by the leaders of the Bates Outing Club.

They use a gas-powered auger, pickaxes and a two-man saw that might be a relic from Bates’ early 20th-century forestry program to hack out a hole with great vigor, if not precision.

Callahan says that while co-founding the Puddle Jump can’t be confused with anything terribly “useful or important,” it’s a pretty good feeling knowing that “Lake Andrews has its place in the history of fun.” 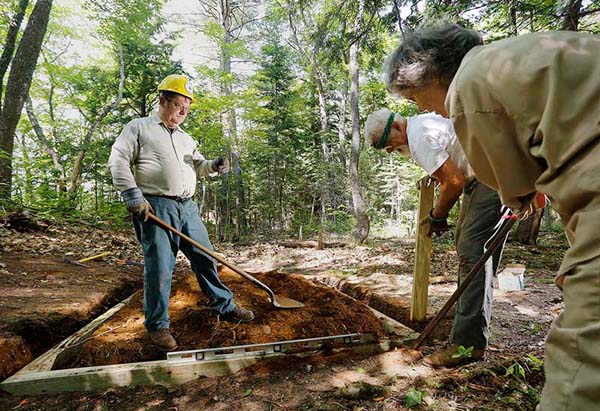 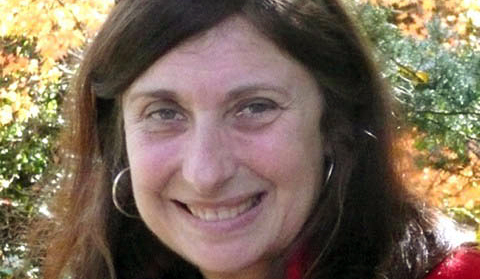