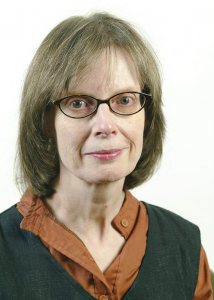 Professor Emerita of English Carole Anne Taylor, a scholar, teacher and champion of social justice, died March 11 at the Gosnell Memorial Hospice House in Scarborough. She was 71.

Taylor joined the faculty in 1978 and was one of the first women to receive tenure at Bates, in 1985. Promoted to full professor of English in 1993, she was a founding member of the college’s interdisciplinary programs in African American Studies and American Cultural Studies, and she played a crucial role in the college’s development of its first affirmative action policy in the 1980s.

Her colleague Charles Carnegie, professor of anthropology and past chair of the Program in African American Studies, called her “a champion of justice both on campus and in the wider community who encouraged students to bridge the divide between theory and practice.”

Those students, he said, are her legacy: “a pioneering cohort of alumni that she helped to cultivate and who have stayed on beyond graduation and contributed to significant change in the local region.”

Long involved in Maine social justice issues, Taylor was an adviser to the Maine Rural Workers Coalition in the early 2000s, with the goal of helping rural migrant agricultural workers develop leadership skills, and she involved Bates students in the work.

“The best thing about it,” she once said, “is that it gives students a sense of what it’s like to do social justice work that really is worker-centered — it’s not about themselves. It’s not charity work.”

Carole was the author of The Tragedy and Comedy of Resistance: Reading Modernity through Black Women’s Fiction (1999) and A Poetics of Seeing: The Implications of Visual Form in Modern Poetry (1985). 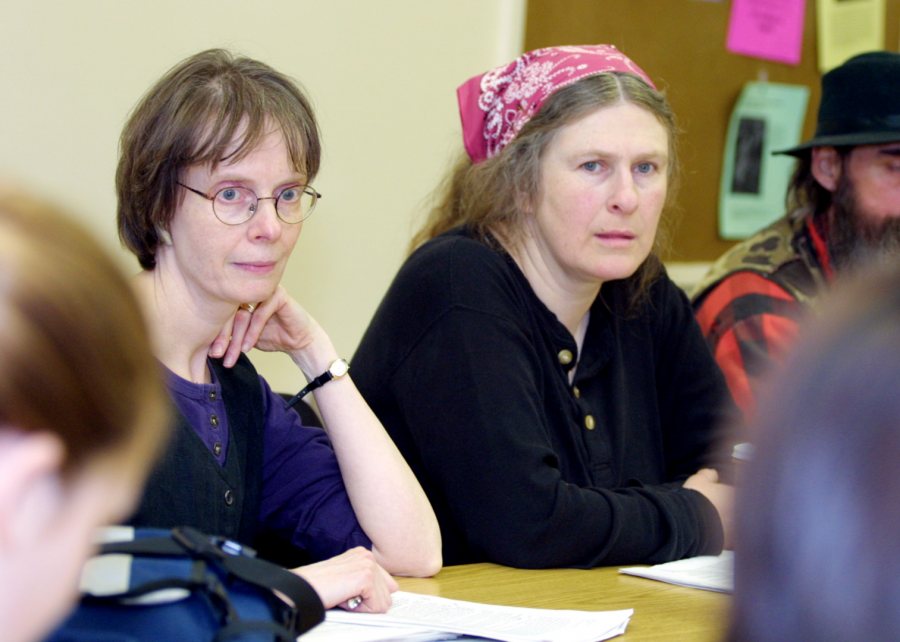 At the final faculty meeting of the 2011 academic year, Professor of English Lillian Nayder delivered the traditional tribute upon Taylor’s retirement from the faculty. Below is the text of that tribute:

2011 tribute to Carole Anne Taylor by her colleague Lillian Nayder

When we think about Carole Ann Taylor and what she means to Bates College and to the English department, a number of words spring to mind: among them, “politico,” “mentor,” “matriarch,” “activist,” “raconteur,” “warrior” and “theorist.” She is a woman who is Brave (with a capital “B”). If you don’t yet know why these terms describe Carole so aptly, a sketch of her contributions to Bates should help.

Carole received her bachelor’s degree from Reed College and her Ph.D. in comparative literature from Harvard University.

Carole came to Bates in 1978, when the school was a very different place than it is now. Indeed, Carole has played a crucial role in transforming the college from what it was then into the Bates of 2011: a liberal arts institution still, but one in which gender, class and race are significant categories of critical analysis — in which the study of African American and ethnic American literatures redefines the ways we think about and teach the English and American canons — and in which middle-class values are more easily recognized for what they are: middle class.

Her hallmark courses are those that take students outside the mainstream.

Our newly revised mission statement recognizes that we teach and learn through the “transformative power of our differences.” The courses that Carole has brought to the Bates curriculum speak to such values and aims. She has taught the “European Tradition from Homer to Cervantes” and “Major American Writers,” but her hallmark courses are those that take students outside the mainstream.

She taught courses like “The Dissenting Tradition of American Literature,” for example, which addresses issues of poverty, class, ethnicity and sexual orientation, and focuses on works “by or about those who have felt themselves [on the outskirts] of American culture”; “Storytelling,” which draws on diverse traditions and introduces students to cross-cultural forms and ways of telling; and “Literature and Cultural Critique,” which uses theoretical ideas about cultural difference and power to inform interpretation and enable students to rethink their conceptions of the literary.

For years, Carole taught “Writer’s Workshop,” once the sole creative writing class at Bates; with Carole’s help, that course has developed into the four poetry and prose writing classes that now make up the concentration in creative writing within the English major. Carole’s demanding encouragement of so many fiction writers and poets who have passed through our department — and her unflagging generosity to them — have been gifts beyond reckoning.

Her support, her insight, her advice and her humor have meant the world to those who found themselves embattled on various grounds.

Carole was one of the first women to receive tenure at Bates, preceded only by three or four other women on the faculty. With Anne Thompson, she was one of the two matriarchs of the English department when I arrived in 1989. Carole has been a steadfast mentor to many a junior faculty member. Her support, her insight her advice, and her humor have meant the world to those who found themselves embattled on various grounds.

From 1989 onward, Carole served on the Affirmative Action Committee at Bates, and for much of the 1980s, she worked toward that end as a member of the subcommittee that drafted an Affirmative Action Plan for the college. “What will Bates be,” one colleague asks, “without Carole’s unerring instinct for justice?”

While Carole’s institutional legacy may be the presence of affirmative action at Bates, her curricular legacy lies in our attention to interdisciplinarity. These two commitments were effectively combined in the early 1990s, when Carole became the driving force behind the Mellon symposium for first-year students entitled “Constructions of Racial and Ethnic Identity.”

Designed to counter the received cultural knowledge students brought with them to college, the symposium was taught by a team that comprised Bob Branham, Marcus Bruce, Elizabeth Eames, Leslie Hill and, of course, Carole; it served as a living and breathing argument for the importance and potential of African American studies on this campus.

Not surprisingly, her works and experience as an activist energize her teaching.

In both 1990 and 1991, the Filene Room was filled to capacity with more than 100 students each term, enthralled by Carole’s analysis of Toni Morrison’s The Bluest Eye and Sula. As one of the students in the class put it only last month, “that symposium changed my life.” Those who taught the symposium worked to create what became our programs in African American Studies and American Cultural Studies. A founding member these two interdisciplinary programs, Carole served as chair of ACS in its earliest years.

An architect of that program, Carole also served for more than a decade as an adviser to what is now OUTfront at the college. Her fight for social justice at Bates and beyond has been tireless. Not surprisingly, her works and experience as an activist energize her teaching. A participant in the Freedom Summer of the mid-1960s, she sees each class meeting as a vital chance to challenge entrenched views and provoke new possibilities of thought.

For some students, this challenge can be unsettling; after sometimes-difficult class meetings, Carole meditates on the best ways to address the issues at hand, often designing innovative group work and pertinent readings to move the class forward. Eager to provide fresh ways to learn, she has been rewarded with students inspired by the challenges she offers. Many of them have received scholarships, fellowships and entrance into excellent graduate programs, and some have dedicated their lives to social change.

Carole has twice won the Kroepsch teaching award at Bates and she is deservedly famous as a mentor of our students, with a line reaching down the hall from her Pettigrew office. Although she is a sophisticated theorist, her advice to students can be very down-to-earth — as one recalls, Carole sometimes remarks that a point or a statement is “as clear as mud.”

Carole teaches her students to… recognize the sometimes “subtle [differences between] how things seem [and] what they really are.”

Carole’s students speak of her kindness as well as her brilliance, a combination especially valued by those writing their honors theses under her direction. One advisee describes Carole’s crucial encouragement during what proved to be a very difficult time: “Carole urged me to continue. She coached me through the entire thesis writing process… [and] allowed me to see the more interesting parts of what I was writing… I was having trouble writing down all of the brilliant ideas that came out of Carole’s mouth… [this was before laptops in class were widespread!], so I asked if I could bring a tape recorder… Each evening I would painstakingly write down everything she said, and read and reread her encouragement and suggestions. Regrettably, I have not had the pleasure of working on such a challenging project since my senior honors thesis.”

Another advisee notes that Carole teaches her students to “examine cultural and personal biases” and to recognize the sometimes “subtle [differences between] how things seem [and] what they really are.” Yet another credits Carole with “forever changing the way that [she] thinks”: “Professor Taylor… open[ed] my eyes to a new way of thinking about [literature] as well as [about] people in the world around me. I feel so thankful for having studied under her.”

While colleagues aided or mentored by Carole may not have recorded her words on tape, they remember and value them as fully as many a struggling thesis advisee. Carole has taught and inspired her colleagues; she has fought many good fights on their behalf. Sometimes she has acted as a shield, putting herself between an unseasoned or vulnerable faculty member and an antagonistic superior or an insolent student.

She has been alert to circumstances in which she could explain how privilege might be skewing important decisions, and has used her standing to protect those marginalized by “business as usual.” She has been an affirmative action activist and a presidential search committee member.

Have I mentioned that she is a mother and grandmother? A musician, an artist, a gardener and a cook? That she is spirited, generous and funny? That she has worked in construction and that she has been hijacked (I mean literally, on an airplane)? While we hope she can avoid some of these pastimes, we hope she will have more time for most in the intervals of her social activism. Carol, thank you for all you have done for your students, for the college and its faculty. We are most deeply indebted to you.