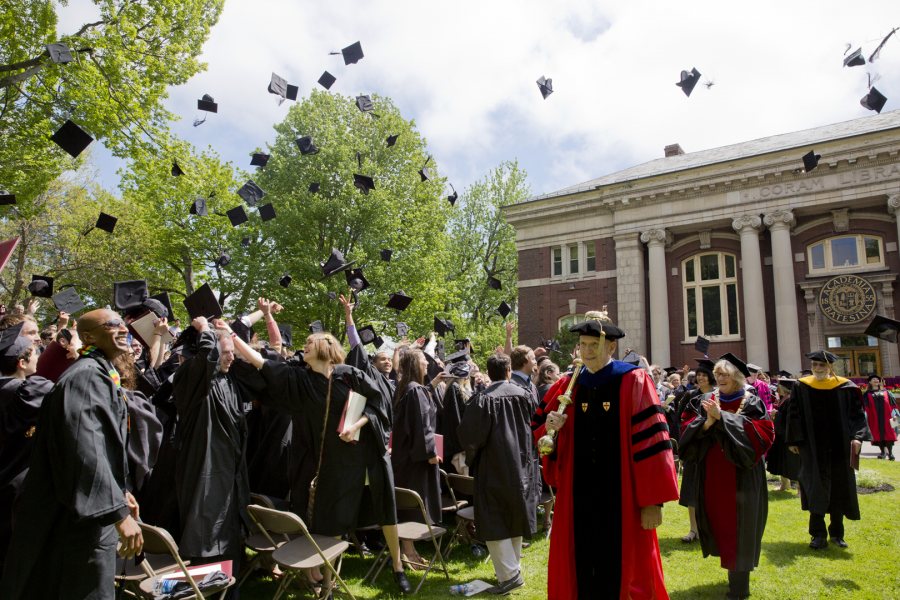 Bates will confer honorary degrees on four leaders in medicine, mathematics, American furniture design and athletics during the college’s 149th Commencement ceremonies on Sunday, May 31.

Manjul Bhargava, winner of the 2014 Fields Medal for mathematics and a professor at Princeton University, will deliver the Commencement address.

During Commencement, which begins at 10 a.m. in Merrill Gymnasium (due to inclement weather) and will be livestreamed at bates.edu/live, the college will also confer honorary degrees on:

“These four individuals approach their work with passion, creativity and extraordinary dedication,” Spencer said. “In so doing, they have become leaders in their fields and models of the values we seek to instill in our students and embody in all aspects of the Bates experience.”

Commencement concludes the undergraduate careers of the 484 members of the Bates Class of 2015, representing 32 U.S. states and 31 countries.

More about the 2015 honorands 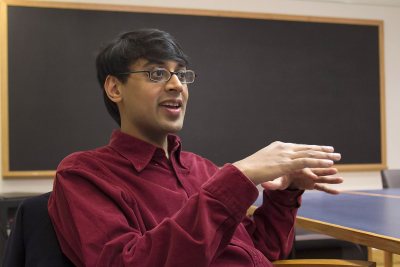 Manjul Bhargava is celebrated for his achievements in mathematical research, achievements that last year earned him the Fields Medal, a coveted honor for mathematics that goes to three or four under-40 mathematicians every four years.

“Bhargava’s work in number theory has had a profound influence on the field,” the International Mathematical Union stated in announcing Bhargava’s award. “A mathematician of extraordinary creativity, he has a taste for simple problems of timeless beauty, which he has solved by developing elegant and powerful new methods that offer deep insights.”

Bhargava’s breakthroughs in number theory are the products of an intellect that perceives math’s intricate complexities in the context of a greater whole.

“Bhargava’s mathematical tastes, formed in his earliest days, are infused with music and poetry,” Erica Klarreich wrote in Quanta Magazine. “He approaches all three realms with the same goal, he says: ‘to express truths about ourselves and the world around us.’”

For Bhargava, wrote Klarreich, “the counting numbers don’t simply line themselves up in a demure row. Instead, they take up positions in space. … And they move through time, in the rhythms of a Sanskrit poem or a tabla drumming sequence.”

Manjul Bhargava uses math ‘to express truths about ourselves and the world around us.’

Number theory is the study of the properties of whole numbers. Bhargava has made important contributions to the field in such areas as composition laws pertaining to binary quadratic forms, which were the topic of his dissertation at Princeton University, and in the field known as the geometry of numbers, where his contributions merited the Fields Medal.

Born in Canada in 1974 to parents of Indian origin, Bhargava grew up primarily in the United States. When he was a young child, his mother, Hofstra University mathematics professor Mira Bhargava, found that she could keep him occupied by asking him to add or multiply large numbers. He also spent time with his family in India, where through his grandfather he discovered ancient Sanskrit poetry, whose mathematical qualities captivated him — and provided early insights into number theory.

Mira Bhargava also introduced her son to the Indian hand drums known as tabla, and today he is a dedicated and highly accomplished player with a sideline as a concert performer. He also plays guitar, violin and sitar.

Manjul Bhargava graduated from Harvard University in 1996 and received his doctorate from Princeton in 2001. He became a professor at Princeton two years later, and today is the R. Brandon Fradd Professor of Mathematics there. He is also the Stieltjes Professor of Number Theory at Leiden University in the Netherlands.

In addition to the 2014 Fields Medal, his other honors include the Merten M. Hasse Prize of the Mathematical Association of America (2003), the Blumenthal Award for the Advancement of Research in Pure Mathematics (2005), the SASTRA Ramanujan Prize (2005), the Cole Prize in Number Theory of the American Mathematical Society (2008), the Fermat Prize (2011) and the Infosys Prize (2012). He was elected to the U.S. National Academy of Sciences in 2013. 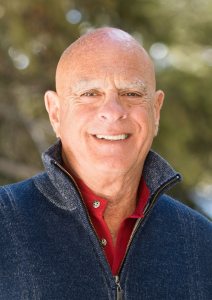 If you have ever been prescribed an eye medication or treatment for an external eye disease, it’s likely that you have benefited from the lifelong work of Dr. Mark Abelson, one of the world’s leading eye doctors. His groundbreaking research in how clinical trials are structured has led to the development of some of the most prescribed drugs currently available for the treatment of eye diseases.

When it comes to bringing a new drug to market, the rigor and scientific methods used to study and ensure its safety and effectiveness are just as important as the science behind the drug itself. Abelson recognized this more than 40 years ago and began his lifelong work to improve the drug development process, which lead to the founding of Ora Inc.

Abelson currently serves as chief scientific officer of Ora, the world’s leading ophthalmic research and product development firm. Ora and its clients have, over the past 30 years, earned nearly three dozen approvals for medical treatments and devices marketed globally.

Born in Montreal, Canada, Abelson earned bachelor’s and medical degrees from McGill University. He is a member of the board of trustees at the Schepens Eye Research Institute, clinical professor of ophthalmology at Harvard Medical School and surgeon emeritus at Massachusetts Eye and Ear Infirmary. In addition, he served 10 years on the Medical Advisory Board to the Dean of McGill Medical School.

By applying creative problem solving across a range of disciplines, Abelson exemplifies a life of purposeful work.

Abelson has received numerous awards over the course of his career and has written more than 600 publications and abstracts, including a textbook, Allergic Diseases of the Eye. Abelson also started Andover Eye Associates, one of the country’s first multi-specialty eye care private practices.

Bates believes that preparing students for lives of purposeful work lies at the heart of the liberal arts mission, and Abelson exemplifies a life of purposeful work. By applying creative problem solving across a range of disciplines, he has built a healthy, respected business while simultaneously improving the health care of millions of people worldwide.

Further, he and his son Stuart, a member of the Bates Class of 1997 and Bates trustee, have offered many Bates graduates the opportunity to explore the medicinal drug industry through both jobs and internships at Ora over the past two decades. They note that these young workers are able to apply their creativity and analytical skills to conduct and publish research while working with top pharmaceutical scientists to move drug development forward.

When he’s not working, Abelson divides his time between competitive skate-skiing in the winter and competitive rowing in the summer. 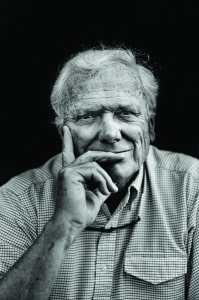 Thomas Moser has earned an international reputation as a designer and maker of handmade American furniture. While his company’s Maine-made work graces homes, businesses, colleges, libraries and public spaces around the world, “I’ve never looked at our efforts as being in the furniture industry,” he has said — indeed, his work is more about the careful and elegant joining of art, craft and talent.

His medium is wood, a “creative compass,” in the words of The Portland Press Herald, that has guided, formed and defined Moser’s and his company’s creativity and self-identity over the past 43 years. In 1972, Moser was a tenured associate professor of rhetoric and director of debate at Bates when he resigned from the faculty to pursue his woodworking. “I want to be a doer,” he said. Thus having dismantled the framework of one career, he set about to design and assemble another.

“I never started with the notion this could be successful,” he told USA Today in 1993. “I had no sense of turning it into a business. I just wanted to make truly well-made things of wood.”

Moser recalls the epiphany on a bright September morning in 1971 when, after inspecting a table he had made in his cellar woodshop, he concluded that “this was a good table.” In that moment, he discovered purposeful work — how “there was enough artistry in me to produce something that people would pay for” and, “more importantly, those people would be getting their money’s worth.”

‘I just wanted to make truly well-made things of wood.’

He began his business, Thos. Moser Cabinetmakers, in an old grange hall in New Gloucester, Maine. His wife, Mary, managed the selling and finances, while their four sons trained as apprentices (all four have worked for the company). The company’s first advertisement, in Maine’s Down East magazine, read, “Our furniture is inspired by traditional design, constructed with pride and executed by hand, restoring a relationship between man and his practical art.” Self-taught, as are most of his designers and builders today, Moser drew from Shaker, Queen Anne, Pennsylvania Dutch and other traditions for his early designs. Today, the Thos. Moser style reflects design movements in various cultures and eras that share, in his words, “a distaste for ornament and ostentatious display…[and are] respectful of materials [that] celebrate the work of the human hand.”

Moser pieces are at home in public libraries from Atlantic City to Vinalhaven, Maine; in colleges from Bates to UCLA, and in public spaces from the Thoreau Institute at Walden Pond to the Ronald Reagan Presidential Library. “We are in the business of creating tomorrow’s heirlooms,” he said in 1982. In 1987 the company built a new workshop facility in Auburn, Maine, not far from its original location, and today employs some 70 cabinetmakers and 130 employees total. The company has showrooms in Boston, New York, Philadelphia, San Francisco and Washington, D.C., in addition to Freeport, Maine. 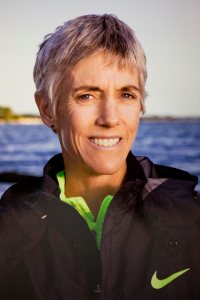 Joan Benoit Samuelson is among the most recognized and decorated athletes ever to emerge from the state of Maine. A native of Cape Elizabeth, Samuelson is an Olympic gold medalist, a two-time winner of the Boston Marathon and a world record holder many times over. She was the subject of a Nike advertising campaign titled, “There is no finish line,” and was named by Sports Illustrated one of the top female athletes of the 20th century. Beyond sports, she is an environmentalist, a mother, coach, author and philanthropist.

And, at age 58, she is showing no signs of slowing down or looking back.

Looking back, in fact, is something Samuelson almost never does, especially when she is running. “When you look back, you are conceding the race,” she says.

Although her dominating win in the inaugural women’s marathon at the 1984 Olympic games in Los Angeles is often thought to be Samuelson’s crowning achievement, it’s through her involvement and work in Maine that most people have come to know “Joanie.” A resident of Freeport, Samuelson has coached at the town’s middle school and served on public boards and commissions dedicated to issues she feels passionately about — protecting the environment, and nutrition and physical fitness for children. She is a longtime and active board member of Friends of Casco Bay, which works to improve and protect the bay’s environmental health. Samuelson is also on the senior leadership team of Let’s Go! Maine, a nonprofit dedicated to reducing childhood obesity. Over the years she has lent her name and talents to the YMCA and to many other charities and nonprofit organizations.

Joan Benoit Samuelson is an environmentalist, a mother, coach, author and philanthropist.

Samuelson is the founder and chair of the TD Beach to Beacon 10k Road Race, run each summer in support of Maine charities. This summer, the race will benefit the Good Shepherd Food-Bank in Auburn. Samuelson is also a trustee at Bowdoin College, from which she graduated in 1979 with a joint major in history and environmental studies.

Samuelson’s daughter, Abigail, Bates Class of 2010, majored in sociology and was elected to the College Key. She was a member of the college’s Nordic skiing and cross-country teams.

A champion for young women everywhere, Samuelson has blazed a path for others to pursue their dreams and to push themselves beyond the bounds of what they thought possible. Samuelson’s outlook on running translates perfectly to everyday life: Keep moving forward. Be comfortable with yourself. Believe in your accomplishments. But most importantly, run your own race.